December 18 2017
200
What a joy ... Grateful Russians applaud from a feeling of deep satisfaction with the fact that Lyudmila Alekseeva became the laureate of the Russian State Prize. The relevant decree was personally signed by Russian President Vladimir Putin, thus responding to the candidacy of Mrs. Alekseeva, nominated by the Human Rights Council under the head of state.


From the press service of the Kremlin:
Vladimir Putin presented the State Prize for Outstanding Achievements in the Field of 2017 Human Rights Activities to Lyudmila Alekseeva, Chairman of the Moscow Non-governmental Organization for the Implementation of the Helsinki Agreements Regional Public Organization. 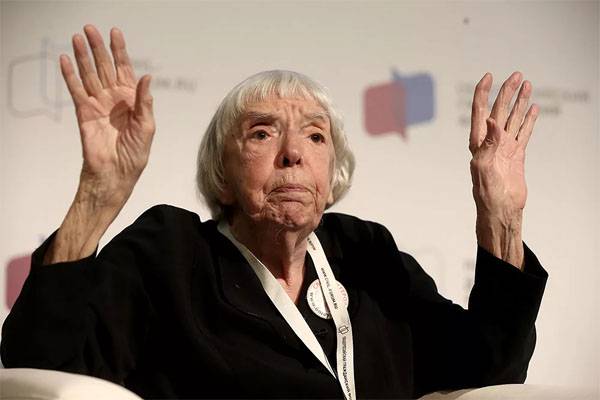 In the same press release, it is reported that the State Prize for charity work was awarded to the Chairman of the Board of the regional fund in support of children with leukemia, Vladimir Vavilov. But the activity of the fund to support sick children, of course, fades against the background of the merits of the MHG.

For reference: for the first time, the State Prize for the Protection of Human Rights was awarded last year. Her winner was Elizaveta Glinka (Dr. Liza), who a few days later was killed along with the other passengers of the Tu-154 aircraft of the Russian Defense Ministry off the coast of Sochi. The plane was heading to Syria.

But back to today.

While the entire progressive Russian public applauds the Kremlin’s decision to award the State Prize in 2017 to the “grandmother” of the country's human rights movement Lyudmila Alekseeva, the country’s main human rights defender is slightly confused about what happened. In the blitz-interview radio station Echo of Moscow she said that she considered the decision of the president to be strange.

From the statement of Ms. Alekseeva:
The fact that such a premium has been introduced is strange, because human rights activists protect citizens precisely from violations of human rights by state officials. And at the same time, the state issues a premium for it. I do not rule out that the state wants officials as its representatives to respect human rights. Therefore, I believe that in our country it is a necessary premium.

If we consider that Ms. Alekseeva is a citizen not only in Russia, but also in the United States, then the presentation of the State Prize of Russia for human rights protection looks particularly good to her, if not to say - fresh and relevant. After all, we are partners, how could it be otherwise? .. Even the CIA helps us to prevent terrorist acts, and we, well, nothing in return? Well, no, it's not human. One could, of course, hand over the State Award for Human Rights directly to Mike Pompeo, Director of the Central Intelligence Agency of the USA, but it’s a pity he doesn’t have Russian citizenship ... Or not yet? .. They are giving it to Lyudmila Mikhailovna.

But just the other day at the "VO" the question was raised about how our human rights activists, by the sweat of their brow, are fighting over the protection of the rights of Russian citizens. Like they, without sparing their abdomen, they stand up, for example, for slandered Russian athletes. The topic was also raised in the remarkable article by Viktor Marakhovsky on the RIA News. In the material exactly before the presentation of the State Prize to Lyudmila Alekseev, her last name also surfaced. Let me quote Victor Marakhovsky:

The wild wording applied in the Report of the IOC Disciplinary Commission of December 2 on the “decision to cancel the presumption of innocence” against Russian athletes is unthinkable in the civilized community of the 21st century, the statement reads. “Such measures of collective responsibility are natural only for dictatorships of the last century, but today we are witnessing with growing alarm how elements of anti-utopias penetrate our lives and the practice of influential international organizations. It can hardly be considered a coincidence that the demonstrative sports punishment of Russia occurred against the background of the anti-Russian media campaign that swept the Western countries. Even if the WADA informant, on whose evidence the decision was based, could confirm his accusations against officials of the Russian Olympic Committee, the IOC still should not have applied total punishment for athletes. "The position of Memorial and Human Rights Watch was supported by the head of the Council on human rights, Mikhail Fedotov, and the head of the Helsinki Group, Lyudmila Alekseeva.

Just kidding, of course. Actually, I made this statement up.

Joke wonderful. So the state that the head of the Moscow Helsinki Group has been rewarded with, apparently, also decided to joke ... over the activities of homegrown (well, or not quite homegrown) human rights activists. Or is it all serious? There is a human rights activist - there will be a prize. You know, she has the Sakharov Prize, the Olof Palme Prize, the Natalia Estemirova Prize, the FEOR Prize “Man of the Year” is also there, the Order of the Legion of Honor, as well as the Order of Merit for Germany, Lithuania and Estonia, but with the Russian bonuses and awards - utter disarray. Well, now the situation is fixed. And it was fixed by the head of state, who is on 4 term as a defender of human rights defenders and a Russian peacekeeper ...

Lyudmila Alekseeva began her human rights defenses in the 70s in the USSR. But in the USSR, then human rights defenders of the format Lyudmila Mikhalny experienced not such piety as they are now, and therefore in the same 70 (namely in 1977) Lyudmila Alekseeva and her spouse emigrated to the United States, breaking free from the monstrous paws of the bloody regime. In the United States, too, they didn’t accept that a priori someone could defend the rights of ordinary Americans, and therefore Lyudmila Alekseeva plunged headlong into the human rights protection of the Soviet population - it’s not like the one from overseas ...

Having broken out by the order of the American administration of that time with the epic "History dissent in the USSR. The newest period ”, Lyudmila Mikhailovna accurately determined which field to look for in the future. Having become the consistently recognizable voice of Voice of America and other Radio Liberty, Lyudmila Alekseeva began to stigmatize the Soviet regime, which was fashionable and modern, well, just like now in certain circles ...

In 1989, Lyudmila Mikhailovna returns to the USSR, leaving her son "Michael to stay in a foreign land".

Well, then - as on the thumb. Accusations, “stigmatizing” (or stigmatizing, ugh, you break your tongue ...) and so on and so forth. A special flourishing of stormy human rights activism has happened in recent years, when denunciations and “deceptions” fell like a cornucopia: “Putin, pull out the troops!”, “Putin, I leave the Council of the Human Rights President!”, “Putin, stop aggressive gamble! ”,“ Putin, remove the quotation from the Soviet anthem from the panel at the Kievskaya metro station! ”,“ Putin, do not respond to American Magnitsky law! ”,“ Putin, I am not going to refuse American citizenship! ”

And the president, thinking, decided that the answer to this can be only one - the State Prize. It must be assumed that when all the merits of the hero of the occasion are taken into account, the State Army Party becomes a trolling of the 80 level.

And now you yourself try to organize a human rights organization for foreign funds, obtain foreign citizenship, run away from the country, become a mouthpiece of foreign propaganda against your own country, then return, denounce the country and the government for the hundredth time and declare that you will not give up foreign citizenship and then receive the main prize from the hands of the president ... Well, there is only applause, stormy and never ceasing. How else?..

And finally, a quote from the president:
There are situations when the choice is virtually unanimous. The state prize for outstanding achievements in human rights activities was awarded to Lyudmila Mikhailovna Alekseeva. At all times she was true to herself and to her convictions, to her ideals. With Lyudmila Mikhailovna, you can disagree in something, argue about something, and I sometimes do it, but this does not interfere with treating her with great respect for her courage and for her position. And today's award is a sign of gratitude to Lyudmila Mikhailovna for the years and decades she devoted to human rights activities, and to honest and selfless service to people.

Ctrl Enter
Noticed oshЫbku Highlight text and press. Ctrl + Enter
We are
Results of the week. "Who you are lucky, in fact, and will carry a cock, and such a bird as you, I, too, will rush!"Reports from the militia of New Russia for 27-28 September 2014 of the year
Military Reviewin Yandex News
Military Reviewin Google News
200 comments
Information
Dear reader, to leave comments on the publication, you must to register.