The National Interest: Russian army snipers have rifles and cartridges capable of penetrating US body armor

December 19 2017
30
In recent years, the Russian defense industry, fulfilling the orders of the armed forces, has paid special attention to the subject of promising sniper rifles. Over the years, a whole series of new models of this class have been introduced, some of which have already entered service. Quite expectedly, new Russian weapons attract the attention of foreign experts and amateurs. weapons, and this interest is realized, including in the form of new publications.


12 December: The National Interest published a new article by Charlie Gao under the heading The Buzz and Security entitled “Russian Army Snipers Have Rifles and Ammo That Can Pierce US Body Armor” - “Russian army snipers have rifles and cartridges that can pierce body armor USA". As is clear from the title, the subject of the publication was the Russian sniper complexes in the form of rifles and cartridges for them. In addition, the name of the publication directly spoke of the danger of similar Russian developments for foreign armies.

As Ch. Gao writes at the beginning of his new article, participation in the Syrian and Ukrainian conflicts allowed the Russian military to gain rich combat experience. One of the features of current wars is the active use of sniper tactics. The consequence of this was the development of the Russian sniper direction. The modern sniper of the Russian armed forces does not use outdated "primitive technologies" of the Cold War. 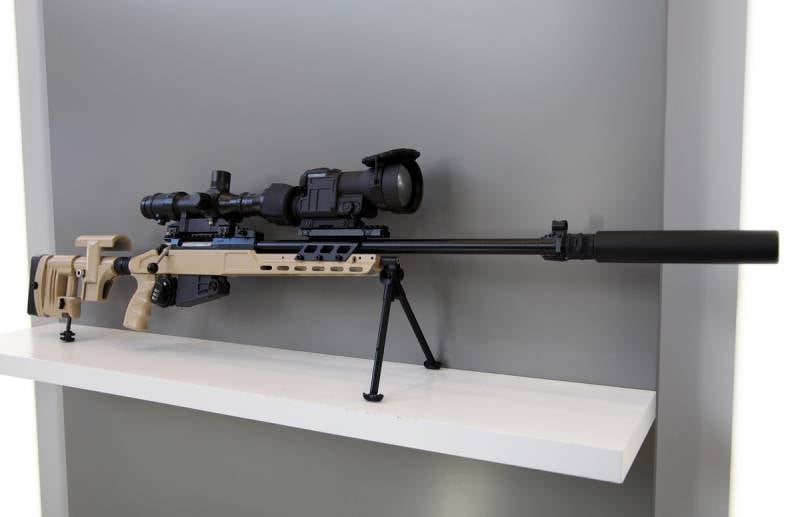 Now a lot of attention is paid to sniper weapons, capable of striking the enemy's manpower, having its own means of protection. At the moment, Russia has three sniper systems that pose a great threat to American soldiers using body armor. In this case, as the author notes, three such systems actually cover a wide range of combat missions. These are the SVDK rifles, various types of weapons chambered for the .338 Lapua cartridge and an AIRW product.

The current sniper weapon of the Russian troops in the form of rifles SVD and SV-98 uses rifle cartridge 7,62х54 mm R. By now, such systems have been “defeated” by American means of protection. These sniper rifles use a special cartridge 7H14 with an armor-piercing bullet with a mass of 152 grit (9,85 g) and accelerate the latter to the speed of 2750 feet per second (840 m / s). There is also a cartridge 7H13 with a bullet of increased penetrability, which has similar characteristics.

Such cartridges are similar in their characteristics to the M2 AP Ball American Ball (.30-06 Springfield), which has an 150-faceted bullet (9,72 g) and an initial speed of 2740 feet per second (835 m / s). Currently, the US Army uses ESAPI / XSAPI body armor. These products were created taking into account the parameters of the cartridge "Springfield" in the armor-piercing configuration, and therefore can protect against its bullets. As a result, such means of protection can withstand hitting Russian rifle bullets with a caliber of 7,62 mm.

Taking into account the similar problems of existing sniper weapons, the Russian army ordered a new rifle for a similar purpose. In accordance with this order, in the recent past, a SVDK product (K - “large-caliber”) was created, the designation of which marked an increase in caliber in comparison with the basic weapon. In accordance with the requirements of the customer, such a rifle should have been able to pierce body armor with a high level of protection.

Ch. Gao reminds that the SVDK sniper rifle was developed on the basis of the Tiger-9 product. The latter was a hunting rifle for the civilian market, created on the basis of the army SVD. From the base model "Tiger-9", first of all, differed by the used ammunition: this rifle was developed under the more powerful cartridge 9,3x64 mm "Brenneke". The latter was originally created for hunting large African game, including elephants. Based on the Brenneck cartridge, the Russian industry created its own ammunition for sniper rifles under the designation 7H33.

The 7Н33 cartridge is equipped with a steel core bullet with a mass of 254 grain or 16,46 g. The initial speed of such a bullet is 2526 feet per second or 770 m / s. Thus, the new cartridge 7H33 about 40% more powerful than the standard rifle 7H13. As the author of The National Interest notes, the increased power of the cartridge for the SVDK is visible even when visually comparing the magazine of this rifle with the ammunition devices for the base SVD. Magazine chambered for 9,3x64 mm differs by a noticeable superiority in size.

The standard optical sight of the SVDK rifle is the 1P70 “Hyperion” product with variable magnification 3-10x. Such a sight is a further development of the PSO-1 system with a fourfold increase, previously developed for the Dragunov sniper rifle. The SVDK rifle is equipped with a folding butt and its own bipedal bipod.

In general, as Ch. Gao writes, the SVDK rifle is a powerful self-loading sniper system, which is distinguished by relatively low weight (6,5 kg), but at the same time capable of striking enemy body armor. Effective penetration of protection is provided at distances up to 600 m. It is important that NATO countries do not have sniper systems comparable to the SVDK rifle.

Russian medium-caliber sniper systems, capable of striking manpower in body armor, are different versions of the weapon chambered for .338 Lapua. One of the reasons for the active use of such a cartridge in Russian projects is its high performance when firing long distances. In addition, the .338 cartridge differs from the Russian rifle 7H14 by about twice as much energy. At the moment there is not a single body armor capable of withstanding an armor-piercing bullet of the .338 Lapua cartridge.

Russian snipers are actively using .338 caliber foreign rifles for an imported cartridge. These are Austrian products Steyr SSG 08, Finnish TRG 42 and British AI AWM. However, the situation in this area is gradually changing. Recently, the T-5000 rifle from the Russian company Orsis has become increasingly popular. In addition, such weapons are already exported. In particular, the T-5000 rifles in the modification chambered for 7,62x51 mm of NATO are in service with the Iraqi special operations forces and are used in battles with terrorists.

Back in 2015, Russian and Chinese snipers who used Orsis products won several international competitions. However, such weapons were still not adopted by the Russian army. However, according to some data, similar systems have already been tested in the framework of the program for creating the equipment of the “Warrior” fighter.

Ch. Gao reminds that the Orsis T-5000 rifle, with all its advantages, is not without its problems. In this context, he recalls the well-known video of the spring 2017 of the year, filmed at the exhibition IWA-2017. Then the visitor to the exhibition, who tried to open the shutter of the exhibition sample, was forced to make a noticeable effort to turn it and unlock it. The author of The National interest believes that this incident indicates a lack of perfection of the new Russian rifle.

Also, a variant of a sniper rifle chambered for .338 Lapua was developed by the Kalashnikov concern. The basis for this sample, which received the designation CB-338, was the already famous rifle CB-98. In this case, any information about the adoption of such weapons, or at least on the conduct of its tests have not yet been published.

The author notes that the latest developments in the field of rifles chambered for .338 Lapua show several important trends. First of all, the appearance of such weapons suggests that the Russian military and security officials have a need to defeat manpower in bullet-proof vests at long ranges. In addition, the very fact of the presence of the Orsis T-5000 and CB-338 rifles indicates, at a minimum, Russia's limited capabilities in the field of self-development and production of such weapons. Similar systems are also produced abroad, but the Russian side prefers to create the necessary weapon independently.

Many NATO countries are armed with both .338 Lapua cartridges and weapons for them. As a result, a significant number of rifles with characteristic capabilities have been created in a number of foreign countries, and their development continues. As an example of this, Ch. Gao cites the American Remington MSR rifle, which is in service with the US Special Operations Command. This weapon, designated PSR (Precision Sniper Rifle - “High Precision Sniper Rifle”), has a barrel chambered for .338 Lapua. It is noteworthy that the barrel of such a rifle is made interchangeable, and the weapon can be quickly "switched" to the .300 WM or 7,62x51 mm NATO cartridge.

Also as a means of hitting targets in body armor can be used Russian rifles ASVK (“Army sniper rifle, large-caliber) and ASVKM. The product KAFP was created in the nineties in parallel with the SECD and was supposed to be so-called. antimaterial rifle. However, in the future, this weapon has mastered other "specialties", characteristic of long-range rifles with sufficient accuracy.

According to the information of Charlie Gao, rifles of the NEA were noticed in Syria and in Ukraine. The product chambered for 12,7х108 mm was used in battles to defeat light armored vehicles or other materiel. In addition, it was used as a sniper weapon of increased power. Due to its large caliber, the AFK rifle is capable of piercing any existing body armor. An attempt by an enemy fighter to hide from such weapons behind an obstacle may also not lead to the desired results.

The KFW rifle is built according to the bullpup scheme. However, it has some differences from foreign weapons of similar architecture. So, on the American Barrett M95 rifle, the bolt handle is located directly on the gate, in the rear of the receiver. The Russian project, in turn, provides for the use of thrust, with which the handle is carried to the front of the weapon, which increases the convenience of the shooter.

More recently, a new modification of Russian large-caliber weapons was created under the designation ASVKM (M - “Modernized”). Due to the use of lighter materials, the mass of the product was reduced to 10 kg. Thus, DIAB is about 3 kg lighter than the American M107 rifle. The modernization project also included an increase in the barrel resource and the installation of a new muzzle brake.

Unlike SVDK rifles and a whole family of products chambered for .338 Lapua, which managed to get only into a narrow circle of special units, large-caliber ASVK and ASVKM are widely used by the army. It is known that at the beginning of 2017, such weapons were transferred to the divisions of the “special forces of the GRU”. In the future, they will be supplied to the mountain and airborne units.

The author of The National Interest notes that NATO has analogs of the Russian rifle ASVKM, but not all of them can be compared with it in size and mass. Such advantages of the Russian development are due to the use of the bullpup scheme and the unique skeletal layout.

His article "Russian Army Snipers Have Rifles and Ammo That Can Pierce US Body Armor" by Ch. Gao concludes with interesting conclusions. He notes that in service with Russia there still remain sniper systems like the SVD and SV-98, the characteristics of which do not allow to penetrate American body armor and hit their users. At the same time, new sniper systems are being developed and put into service that can cope with such combat missions. The industry offers a variety of models, from a converted hunting “elephant rifle” to a large-caliber bullpap system with a skeletal layout.

Such samples of small arms, designed for Russian snipers, can look very unusual. At the same time, they are characterized by high performance and turn out to be truly deadly.


The article "Russian Army Snipers Have Rifles and Ammo That Can Pierce US Body Armor":
http://nationalinterest.org/blog/the-buzz/russian-army-snipers-have-rifles-ammo-can-pierce-us-body-23622