April 7 2012
46
Carries submarine Letheiskoy River.
Golden sorrow falls on the shoulders.
In the chapel by the sea candles burst into tears.
Close waves and rocks mourn,
Children are born to the dead guys ...
Requiem, Alexander Khryashchevsky, November 2000
7 April 1989, in the depths of the Norwegian Sea, tragedy broke out. On board the nuclear submarine K-278 “Komsomolets”, returning to its native shores from combat duty in the world's oceans, a fire broke out. As a result of a dramatic and truly heroic fight against fire, from 69, a man of a submarine crew killed a 42 sailor.
According to the Decree of the Presidium of the Supreme Soviet of the USSR, the crew members of the submarine Komsomolets were awarded the Order of the Red Banner. And the Order of the Commander-in-Chief of the Russian Navy dated 19 December 1995, the date 7 of April was declared the Day of Memory of the Drowned Submariners.
The accident of Komsomolets is, unfortunately, far from the first in the list of tragedies associated with underwater fleet. 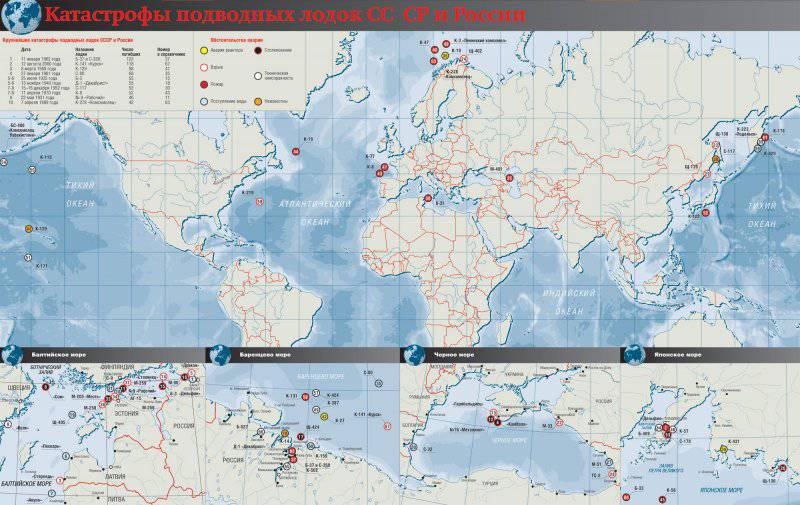 photo http://www.kommersant.ru
This is not a complete list of catastrophes of domestic submarines in which the submarine fleet suffered non-combat losses:
16 June 1904 of the year. "Dolphin". As a result of the error of the crew commander, the boat sank during the training dive, after which it was lifted. Died 24 submariner.
29 May 1909. "Flounder". During the exercises in a semi-submerged position, the boat collided with the battleship Rostislav, split into two and sank. Died 20 sailors.
November 14 1915 of the year. "Shark". For reasons still unclear, the boat lost its stability and sank during a storm. 35 people died.
10 May 1916. "Som". The submarine collided with the Angermanland ship sailing under the flag of Sweden. Died 18 submariners.
8 June 1917 of the year. "AG-15". During the exercises, the ship cook decided to air the boat and did not close the hatch before diving. The boat sank at a depth of about 30 meters. In one of the compartments remained 11 submariners. Without waiting for help, the sailors decided to leave the boat, rushing to the surface in an air bubble. Evacuation survived only 5 submariners. The total death toll from the accident was 18 people.
22 May 1931. "Working". During joint maneuvers, the submarine collided with the Krasnoarmeets submarine. A hole the size of a palm ruined the entire crew. The boat sank at a depth of 84 meters. 46 sailors died.
25 July 1935 of the year. B-3 "Bolshevik". During the naval school exercises, the boat collided with a battleship and sank at a depth of 56 meters. 55 cadets and teachers died.
20 October 1939 of the year. U-424 (U-312, 321). The submarine collided with a trawler and, after getting a hole, sank within three minutes at a depth of 250 m. Among the victims of the disaster was 31 a sailor.
November 13 1940 of the year. D-1 "Decembrist". The main version of the death of the submarine - care to the beyond depth. The boat, apparently, was flattened by pressure. The number of dead - 55 people.
December 16 1952 of the year. C-117 ("Mackrel"). After reporting engine failures, the boat disappeared without a trace. Among the alleged causes of the incident - a sudden failure to the beyond depth and accidental torpedoing by the American submarine. In the abyss 52 submariner disappeared without a trace.
November 21 1956 of the year. M-200 Revenge. Having received a hole as a result of uncoordinated actions of the crew, the boat sank at a depth of 53 meters. The victims of the accident were 36 sailors, six of them managed to escape.
26 September 1957 of the year. M-256. The cause of the accident is a diesel explosion. Killed 35 submariners, seven were saved.
27 January 1961 of the year. C-80. The boat sank due to equipment failure. C-80 was discovered only 7 years after the disaster. On board the submarine was 68 submariners. As the experts found out, after the accident, for some time the 24 seaman remained, who could not leave the emergency boat in individual vehicles.
11 January 1962 of the year. B-37 and C-350. During the preparation for the march, the crew of the B-37 conducted a routine inspection and checked the condition weapons and technical means of the boat. Because of the welding work on the boat, an explosion of ammunition occurred, from which the entire nose of the boat suffered severe damage, all the way to the cabin. Standing nearby, the C-350 suffered serious damage to a solid hull, with the result that two compartments were flooded. At the same time, in the stern compartments of the exploded B-37, living sailors remained, but they went down with the boat. On two boats 122 people died, only one managed to escape.
8 September 1967 of the year. K-3 "Leninsky Komsomol". The fire on board the boat, returning from the exercises, killed 39 sailors.
8 March 1968 of the year. K-129 (up to 1967 of the year B-103). A boat on duty in the Hawaiian Islands has stopped communicating. The causes of the disaster have not yet been clarified. One thing is clear: 98 submariners have not returned to their native shores.
24 February 1972 of the year. K-19. While patrolling the North Atlantic, a fire broke out on board the boat. Thanks to the coordinated actions of the crew, managed to save the lives of 76 sailors. 28 people died.
13 June 1973 of the year. K-56. During a night hike in the direction of Vladivostok on the surface, the boat collided with the vessel Akademik Berg. As a result of a collision, a hole appeared in the hull of the boat, and chlorine began to come out of the batteries. Killed 27 people who were in damaged compartments. Thanks to the non-standard and effective actions of the commander, the 140 man was saved (except for submariners on board were civilians).
21 October 1981 of the year. C-178. Passing the Eastern Bosphorus, the submarine collided with the vessel “Refrigerator - 13”. The cause of the collision is an unauthorized change of course by the commander of the boat and the failure to take measures to prevent the foreman from colliding with the refrigerator.
7 April 1989 of the year - the tragedy of K-278 “Komsomolets”.
12 August 2000 of the year. K-141 Kursk. The tragic death of the entire crew of the submarine (118 people) as a result of the explosion of torpedo ammunition and flooding the boat.
Ctrl Enter
Noticed a mistake Highlight text and press. Ctrl + Enter
We are
The flag is hoisted on the nuclear submarine Severodvinsk!Today, the servicemen of the Submarine forces of the Russian Navy celebrate their professional holiday - the Day of the submarine
46 comments
Information
Dear reader, to leave comments on the publication, you must to register.