Defense Blog: the best 2017 armored personnel carriers of the year

December 19 2017
37
In the past year, the defense industry of different countries continued to work on new models of armored vehicles of all classes. According to the results of these works were presented several new armored personnel carriers. Prospective machines of this kind attracted the attention of specialists and the general public and, quite expectedly, were compared with each other and with other samples. One of the results of this was the emergence of the actual ranking of promising armored vehicles. 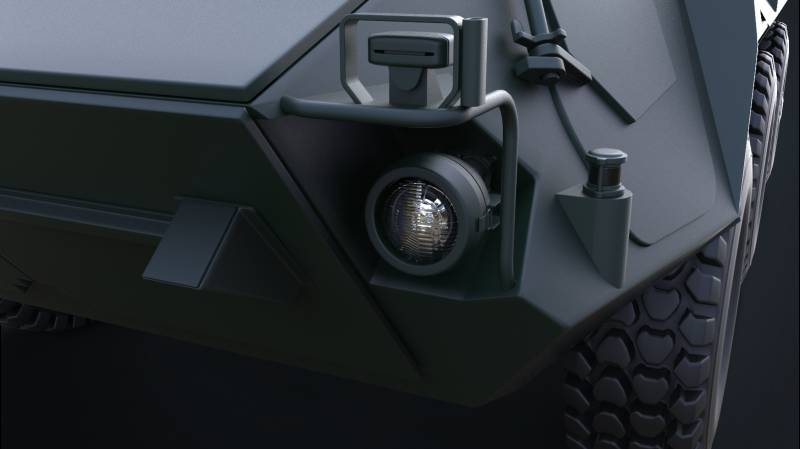 His article with the BTR rating, the Defense Blog, begins with a reminder of the purpose of such a vehicle. It is stated that the armored personnel carrier is a type of armored combat vehicle designed to protect and support infantry in dangerous areas. In the 2017 year, according to foreign authors, the most important features of an armored personnel carrier are the level of protection, mobility, weapons and cost.

Based on a comparison of similar parameters, the Defense Blog Edition has made its ranking of the best BTRs represented in 2017. In compiling such a rating, the latest four-wheel wheeled combat vehicles of recent times were considered. Prospective technology received conditional evaluation and was distributed in several places.

The five leaders in the field of armored personnel carriers, according to the Defense Blog, this year closes the promising project of the Japanese company from Komatsu Defense Systems Division. It is curious that this sample does not yet have an official designation and appears under various names indicating its class, developer, wheel formula, etc. However, this did not prevent the new car from getting into the rating. 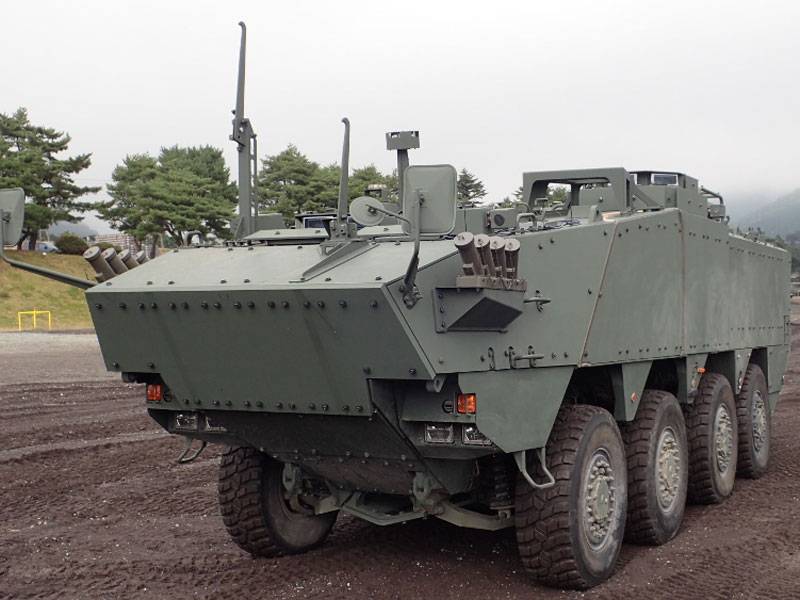 The Japanese armored personnel carrier is an 20-ton vehicle with the 8х8 wheel formula. On the highway, it can accelerate to 90 km / h. The BTR's own crew consists of a driver, a commander and an arrow. In addition, he must carry eight paratroopers. After arriving in the combat zone, the latter can quickly leave their protected transport, using a large stern ramp.

The Japanese BTR of the new generation is armed with a large-caliber machine gun, which makes it possible to fight manpower, some armored vehicles and other targets. The car body is welded from armor steel. It has a V-shaped bottom, with which it increases the level of protection against mines or improvised explosive devices.

Defense Blog assesses the level of protection of a new Japanese BTR at 2 points from 5. The same assessment gets mobility. Armor armored "earned" the entire 1 score. The high cost of technology has led to the fact that this parameter also receives the entire 1 score from 5 possible.

A line higher in the ranking is Rabdan 8x8 armored personnel carrier, which was the result of international cooperation. Its direct developer is Al Jasoor, a joint venture organized by Tawazun (United Arab Emirates) and Otokar (Turkey). At the same time, the new “Rabdan” is in fact a modified version of the Turkish armored personnel carrier Otokar Arma 8x8, differing, first and foremost, in an armament complex. 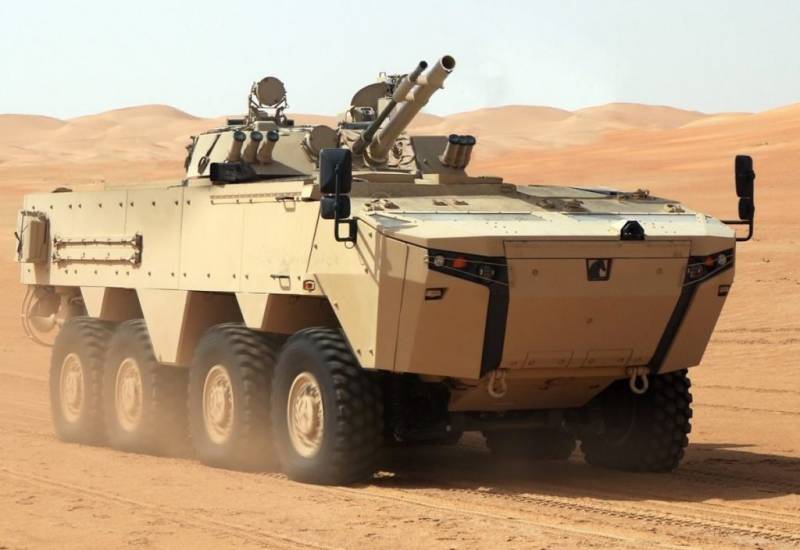 The main difference between the Rabdan BTR and the base Arma lies in the combat module used, borrowed from the Russian infantry fighting vehicle BMP-3. Thus, the joint development armored personnel carrier carries a turret with an 100-mm 2-70 gun, a twin-30-mm 2-72 automatic cannon and a PKT / PKTM machine gun. All barrel systems are assembled in one package with general guidance tools.

In February of this year, during the IDEX 2017 exhibition in Abu Dhabi, the armed forces of the United Arab Emirates revealed their plans for Rabdan 8xXNNXX armored personnel carriers. According to the announced information, at that time there was already a contract for the supply of 8 armored combat vehicles with Turkish chassis and Russian combat modules.

The protection level of the Rabdan 8x8 armored vehicle, by the Defense Blog, ranked 1 from 5. The mobility of an armored personnel carrier received the same assessment. The armament of this sample was rated at 2 points. Cost - in 3. With such estimates, the BTR "Rabdan" remained only in fourth place in the ranking.

Just a few months ago, the Kharkov engineering design bureau for them. A.A. Morozova, part of the concern "Ukroboronprom" presented another version of the further development of its armored personnel carrier BTR-4. This modification of the Ukrainian combat vehicle was named BTR-4MB1. 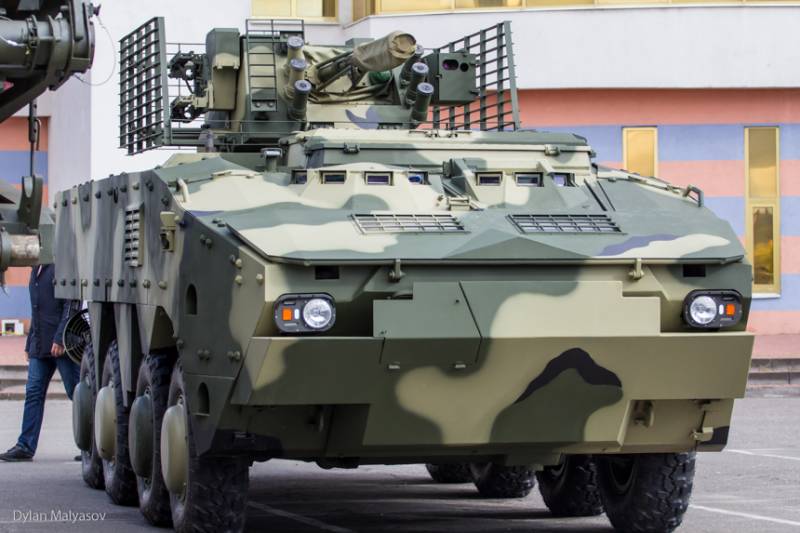 One of the main objectives of the BTR-4MB1 project was to increase the level of protection in comparison with previous vehicles of the family. Results of this kind were obtained through an improved modular system of curtain booking. Elements of this equipment comply with the NATO standards of the STANAG range. Additional armor allows you to protect the crew and troops from bullets, shells and other striking elements. It is alleged that the means of protection of the BTR-4MB1 machine in its characteristics surpass the armor of the base BTR-4. At the same time, they provide acceptable protection even against anti-tank rocket launchers.

In addition to improved ballistic protection, the BTR-4MB1 project uses mine booking, which reduces the likelihood of being hit by mines or improvised explosive devices. The new armored personnel carrier is equipped with a diesel engine of the German company Deutz and an American-made Alisson transmission. On a good road, the car can reach speeds up to 110 km / h.

Defense Blog ranked 4 score from 1 for the defense of the BTR-3MB5 3 score. Motility is also rated at 4 points. Arms received an 5 score. The machine has a relatively low cost, marked by 5 points from XNUMX. With such results, the newest Ukrainian armored personnel carrier was able to climb to third place.

The Finnish-developed Patria AMV 28A armored personnel carrier is another upgrade option for the famous multi-purpose armored combat vehicle. The last modification of the family, introduced this year, is characterized by an elongated body and enhanced protection. 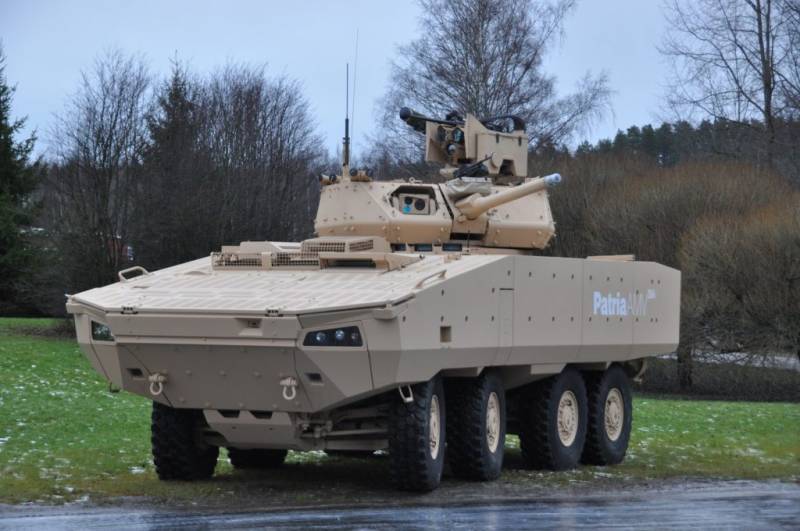 The AMV 28A machine comes with a Kongsberg MCT-30 gun turret. This product is equipped with a Bushmaster Mk 30 44-mm automatic cannon. Over the main turret, it is proposed to install the Protector M153 OWS remotely-controlled combat module with the M2HB large-caliber machine gun and Javelin anti-tank missiles.

BAT Patria AMV 28A is a new version of the Finnish eight-wheeled multipurpose combat vehicle. This sample is optimized for land and water. When crossing water obstacles, an armored personnel carrier can overcome waves up to 0,5-1,25 m.

The high level of protection provided by the new AMV 28A package received a corresponding rating - 4 points from 5. The mobility of this machine received the maximum score - 5 points. For arming the new Finnish model, they put 3 points, for the cost - 4.

Israeli Eitan armored personnel carrier, the result of the collaboration of IMI, IAI and Rafael, moved up to first place in the Defense Blog rating. The newest BTR "Eitan" is an eight-wheeled combat vehicle weighing 35 t. It is noteworthy that this is the first four-wheeled armored vehicle developed in Israel. According to the current plans of the Israel Defense Forces Command, in the future the new BAT Eitan will replace the outdated M113 of all modifications. Over time, this car will become the main Israeli armored personnel carrier. 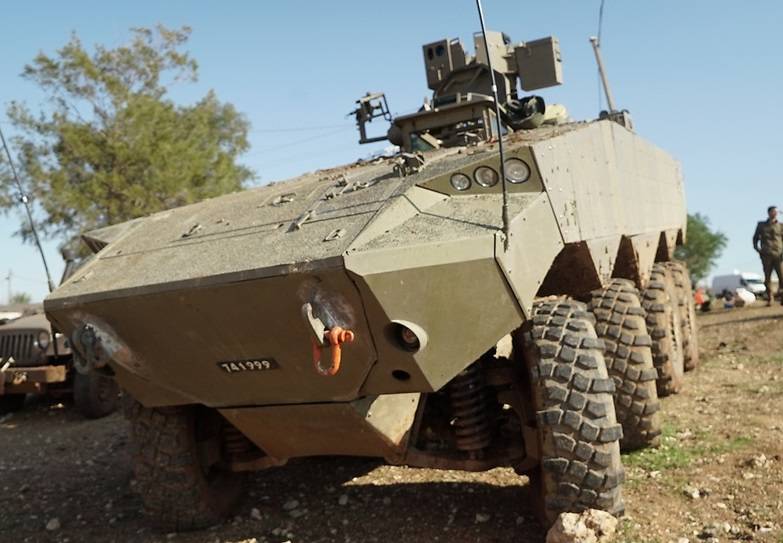 Eitan’s own and attached booking of the Eitan armored personnel carrier is complemented by an active protection system. The Trophy complex should respond to threats in the form of anti-tank ammunition flying up. The prototype of "Eitan" was equipped with a remote-controlled combat module carrying a large-caliber machine gun. It also has a turret mounted under a machine gun rifle caliber. It is alleged that serial armored personnel carriers can receive and other weapons, up to 30-mm automatic guns and 40-mm automatic grenade launchers.

The high level of protection of the Eitan BTR hull was marked by the highest score - 5 points from 5. The mobility of this machine, according to the Defense Blog, is consistent with the 4 score. Armament is also rated at 5 points. However, there is a disadvantage in the form of high cost, which had to be evaluated in 2 points. Nevertheless, despite the high cost, the Israeli armored personnel carrier, having rather high technical and combat characteristics, was able to rise to the highest place in the ranking.

It is hardly necessary to remind once again about the specifics of any empirical comparisons of armored combat vehicles. Even the most detailed analysis carried out using official documentation and real samples, can not always give the desired results. Using only open data, especially for relatively new projects, one should not expect outstanding results at all. Truly accurate and correct assessment of armored vehicles can be made only by the results of its operation, including use in a combat situation.

In addition, in the rating from the Defense Blog, you can find some weaknesses. For example, it is not difficult to notice the strange estimates of weapons of different types. So, the Rabdan 8x8 BTR, which has two 100 and 30 mm caliber guns, as well as the Patria AMV 28A machine with an advanced rocket and artillery complex, received for its weapon only three points. In this case, the BTR-4МВ1 with less powerful weapons was rated by the authors higher - by four points. Similarly, you can criticize and other comparisons.

Nevertheless, the press and fans of military equipment continue to compare known samples and build their own versions. Using the available data and drawing some conclusions, the online edition Defense Blog has compiled its own version of the Top 5 armored personnel carriers presented in the 2017 year. It is unlikely that such a rating should be considered as the ultimate truth, but it is also of some interest. In addition, this attempt to compare technology literally invites everyone to discuss the main findings and even make their own list of the best new products of the year.

Ctrl Enter
Noticed oshЫbku Highlight text and press. Ctrl + Enter
We are
Family BTR-60 / 70 / 80 in combatT-72B vs M1A2 "Abrams"
37 comments
Information
Dear reader, to leave comments on the publication, you must to register.