MFA of the Russian Federation: Russian military from the STsKK will leave Ukraine 19 December

December 18 2017
21
The work of the Russian military in the Joint Center for Control and Coordination of the Ceasefire Regime (STKKK) in the Donbass became impossible because of the actions of Kiev, they will leave Ukraine December 19, said the Russian Foreign Ministry on Monday.

In such conditions, the further work of the representation of the Armed Forces of the Russian Federation in the JCCC became impossible. 19 December 2017 of the year Russian officers who are part of the Center will leave the territory of Ukraine
- indicated in the Ministry of Foreign Affairs. 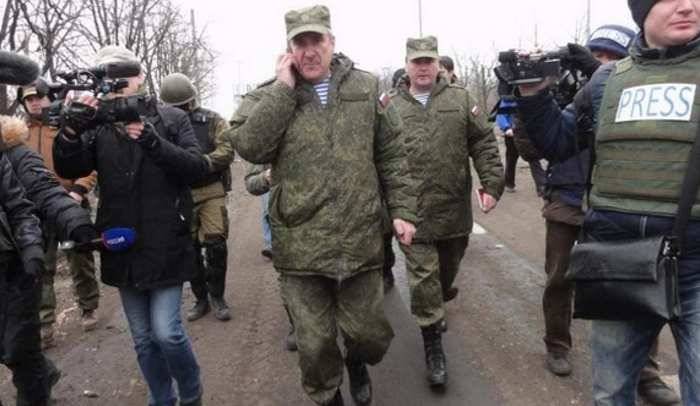 We have already informed our foreign partners about this forced step, emphasizing that the entire responsibility for possible consequences falls entirely on the Ukrainian side.
- added to the Foreign Ministry.

The Russian ministry stressed that the JCCC was faced with serious difficulties due to the position of the Ukrainian authorities.

Thus, Kiev categorically objected to any documentary regulation of the functioning of the JCCC. Attempts to resolve this issue at the bilateral level, either at the site of the Minsk contact group, or in the Norman format of success did not have
- told the Foreign Ministry.

It is noted that for the Russian military personnel who are part of the JCCB, the Ukrainian side deliberately created a "tense moral and psychological environment, put obstacles in the way of fulfilling their official duties."

In particular, Russian officers restricted access to the line of contact, checking service on joint observation posts deployed in the territory controlled by Ukraine.

Earlier, Colonel Andrei Korotkov, a representative of the Russian Ministry of Defense in the security group of the tripartite contact group on the situation in south-eastern Ukraine, said that the Ukrainian authorities had created “openly discriminatory” working conditions for the Russian participants in the Donbass conflict resolution working group.

Ctrl Enter
Noticed oshЫbku Highlight text and press. Ctrl + Enter
We are
Reports from the militia of New Russia for 27-28 September 2014 of the year
Military Reviewin Yandex News
Military Reviewin Google News
21 comment
Information
Dear reader, to leave comments on the publication, you must to register.