December 19 2017
87
How do they see “renewed” Putin in the West? There is an opinion that Putin is ready to turn, finally, to domestic policy, to become a true “servant of the people” and take care of the “fatherland”. The "people's president" for all "there is some money." However, Western analysts are simply ironic: in their common opinion, Putin was and remains an autocrat and populist. 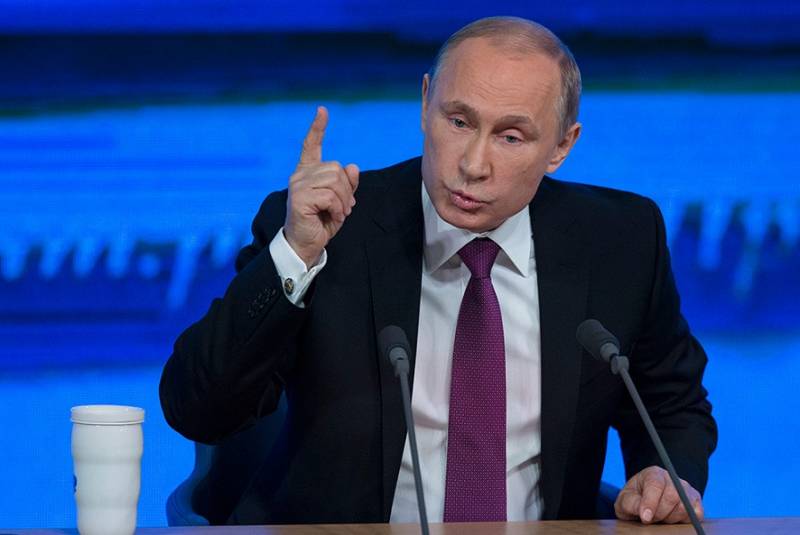 At the annual press conference of Putin, the author notes, "domestic politics dominated." After all, “even an autocrat” has to think about the “consolidation” of its power. However, this still does not mean that Putin is beginning a course of rapprochement with the West.

“The ruler of the nuclear arsenal of Russia,” the journalist scoffs, presented himself as “the obedient servant of the people” and, in general, behaved as if the conference was not an event organized in advance. The current meeting with the people was already the thirteenth in a row.

Despite the fact that the agenda, which adheres to the main TV channels, "is controlled by the Kremlin," even state propaganda "comes to its limits." In the refrigerators, citizens are more vacant than usual, the author reminds, because real disposable income falls for the fourth year in a row, and "already 22 million of 144 million Russians live below the poverty line."

Therefore, it is not surprising that domestic policy dominated the Putin press conference this year, the columnist concludes.

After several years of “foreign adventures”, Putin suddenly stood up and told his people that it was not in world politics, but in their homeland.

Putin, Lokshin wrote, answered questions about the planned increase in the retirement age (“a sensitive question!”), Environmental protection ”(“ find a middle ground between the economy and nature! ”), Distribution of tax revenues between Moscow and the regions (“ regions need more money! ”) and the health care system (again,“ more money! ”).

Putin portrayed himself as a “people's president,” who has “a little money for everyone,” the columnist laughs. This image is consistent with his statement that he will not speak for the United Russia party in the presidential election in March 2018, but will go on as an independent candidate.

The president seems to be saying that his liberal-oriented government thinks only about one thing: how to save money on the people. Duma is generally a circus. And in Russia there is only one person reflecting on the needs of the people ... The non-partisan “people's president” even made his election gift: he presented the citizens with 150 euros, the author writes. This amount will be paid at birth of the first child in the family.

Does all this mean that in the near future Putin will limit himself to the domestic agenda? At least that is what he is trying to show his voters. And it is no coincidence that a few days ago he announced in Syria that the Russian army was leaving victoriously from there.

The Russians "breathed with relief," says Lokshin. Many of them "did not understand that Russia needed in the Middle East." According to public opinion polls, half of the respondents spoke in favor of withdrawing troops.

Putin’s goal, as Lokshin sees it, is to achieve re-election with a good turnout, at least 70 percent of voters. “An autocrat in the Kremlin,” the observer notes, appears in the role of a populist when he claims that people's everyday interests are his top priority. The “patriotic resource” that emerged after the “annexation of the Crimea” seems to be “not enough to legitimize power,” Lokshin said. But this does not mean that this resource is completely exhausted: as soon as Putin again takes the presidency, he can "strengthen the confrontation with the West."

Another columnist, Julian Hans, writing for a German newspaper, agrees with his colleague «Süddeutsche Zeitung». Putin’s re-election will not benefit the people, he is convinced.

Vladimir Putin is not going to the polls from the party, he will run as an independent candidate, reminds Hans. The fact that he will win the election is “beyond doubt,” the author believes. The struggle is under conditions when "there can be no question of fair competition."

The fact that Putin, unlike the previous elections, is not moving forward from the party "United Russia", shows: the Kremlin has written off this party for scrap. The reputation of this “assembly of corrupt courtiers” cannot be saved.

As a result, the Russian system will be even more adapted personally to Putin. After eighteen years of his leadership, "state institutions are in ruins." The journalist explains his opinion: according to opinion polls, "neither the parliament, nor the government, nor the governors have anything to say to the people"; the people of them all "despise."

However, this state of affairs "gives the president more power and simplifies management." On the other hand, he cannot “take care of everything,” even if such an impression is created.

In the future, a new difficult question will arise: the transfer of power. This process will turn into something incredibly difficult, since there will no longer be institutions that would keep the country united.

Today, the US remains “fairly stable despite Donald Trump,” Hans sneers. Does this apply to Russia without Putin? Herr Hans is in doubt.

The general message of German-speaking analysts is obvious.

2. Putin is the only one who distinguishes himself from the crowd of “liberals” and who “cares” about the interests of the people, but these promises are ordinary “autocratic populism” clinging to power.

3. Even today, the people "despise" regional authorities, Duma deputies and ministers. State institutions of Russia are now in ruins; after six years of new Putin's rule, they will turn to dust.

4. If the American system is able to withstand and digest even such an extravagant leader like Trump, then Russia will not have enough of Putin’s safety factor for another term. Putin himself cannot do anything about it: he is not able to take care of “everything” alone.

Such conclusions are very similar, we note, to the assumptions made in other foreign media by other analysts and observers, as well as politicians. No one has any doubts that Putin is being reelected. Bets on K. Sobchak are not accepted in the USA and Europe.

Observed and commented on Oleg Chuvakin
- especially for topwar.ru
Ctrl Enter
Noticed oshЫbku Highlight text and press. Ctrl + Enter
We are
Situational analysis of the death of the MH17 flight (Malaysian Boeing 777), made on the basis of engineering analysis from 15.08.2014Syria: Americans scare themselves, and Asma Asad buys chairs
87 comments
Information
Dear reader, to leave comments on the publication, you must to register.