December 18 2017
33
The American Embassy in Kiev responded to yesterday’s storming of the October Palace (it’s also the International Center for Culture and Arts of the Federation of Trade Unions of Ukraine). Recall that the attack on the palace went to those who call themselves "veterans of the ATO," as well as supporters of the former head of the Odessa Regional State Administration Mikhail Saakashvili. The press secretary of the US embassy issued a statement in which the actions of the demonstrators were called "abuse of the right to peaceful protest."


Earlier, similar statements were made in the diplomatic missions of Britain and Canada in Ukraine.

US Embassy in Ukraine (tweet):
We agree with colleagues from Canada and the UK. Attempts to seize and destroy public buildings are an abuse of the right to peaceful protest. 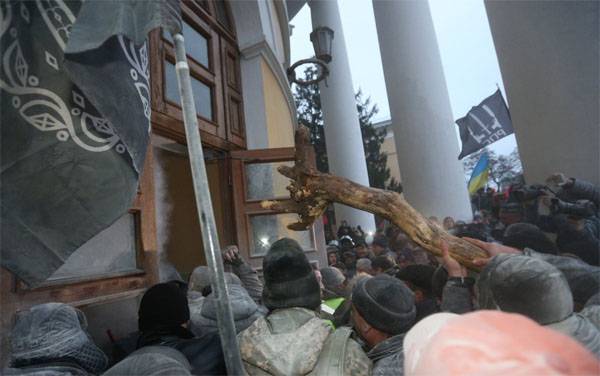 Here it is - the western "logic". When buildings were seized and set on fire by demonstrators in February of 2014, it was called democratic demonstrations against the regime. Now similar actions are marked as “abuses.” The notorious double standards, which we are not talking about is not the first year.

Recall that as a result of the storming of the October Palace, more than a hundred people were injured and injured, of whom 32 are law enforcement officers.

The storming of the October Palace is also commented on by Mikhail Saakashvili. Now he decided to distance himself from those who yesterday decided to take control of the building. According to Saakashvili, it was a provocation, and "the use of force is not our method." And before that, from the stage in the center of Kiev, it was from the circle of Saakashvili and from himself that there were calls to “change the corrupt power and establish the power of the people” by any means. And Saakashvili will have to distance himself from his own statements, because he was actually pulled back from Washington.