December 20 2017
18
60-70s of the XX century in the world shipbuilding were marked by the emergence of fleets new types of specialized vessels. The variety of types increased. Among the new products were ships with horizontal cargo handling. Container transportation became more and more popular. ChSZ, except heavy aircraft carrying cruisers, built ships for the needs of the national economy. Among them are such unique vessels as gas-turbine ships of the type “Captain Smirnov”. 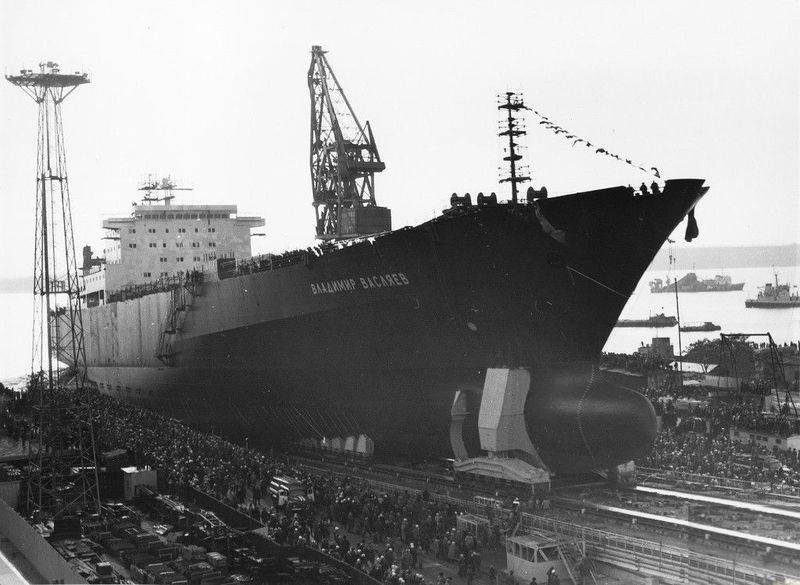 The origin of container traffic

It is believed that the emergence of a compact and convenient way to transport various goods using containers belongs to the American businessman Malcolm McLean. Born in 1913, this man at the beginning of his career worked as a truck driver at McLean Trucing, where the said truck was the only means of transport. In 1937, Mr. McLean came up with the idea of ​​the possibility of loading and unloading a vehicle with its cargo or trailer from a ship. Later, this idea crystallized into the transportation by sea of ​​a cargo trailer trailer, which could be unhooked from the tractor.

In the middle of the 50s, when McLean Trucing became the largest US carrier, Malcolm Macklin, already a wealthy man, founded his own company. The businessman purchased a shipping company and two former naval tankers built during the Second World War for their own purposes.

In the company of McLean, now called “Mclean Industries Inc,” worked a talented engineer Keith Tantlinger. After discussing with him a new concept of transportation, the businessman instructed him to develop a metal container for the transport of goods long 35 feet (10,6 m). This container was supposed to be universal and transported both by ship and by autotrailer. Keith Tantlinger brilliantly coped with the task. He not only embodied the ideas of Maclean in the metal, but also improved them. Total engineer patented more than 70 inventions related to containers.

It took about three months to re-equip tankers into cargo ships, and in April 1956 was one of them made a flight from New Jersey to Texas. On board the Ideal X, there were 58 containers and over a hundred officials, representatives of other shipping companies and managers. The new method was approved, adopted and began to rapidly gain popularity, primarily because of the obvious economic benefits. The costs of loading and unloading decreased by an order. Significantly reduced labor costs and downtime.

Already in the next 1957, the Getheway City, the first vessel specialized in container transportation, began to sail between Florida and Texas. 4 October 1957. It delivered the first 226 containers. The growth of container traffic gradually gained momentum: in 1958, the Fairland vessel entered the Puerto Rico line - US ports.

Mr. McLean's business flourished - his company gradually overgrown with new branches, subsidiaries and absorbed firms. By the end of 60, the company's fleet numbered almost 40 container ships. This allowed McLean and his leading managers to order large and high-speed container ships from 5 shipbuilding corporations for fast transportation of cargo over long distances.

The Soviet Union, which has one of the largest merchant fleets in the world, was, of course, interested in building such ships for cargo transportation. At the beginning of the 1970's The Nikolaev Central Design Bureau "Chernomorsudoproekt" was assigned the task of designing a large container ship with horizontal cargo handling. In 1974, this project, developed under the direction of Chief Designer V.K. Ivzhenko, was created and called the Atlantic.

The result of the work of designers and designers was a four-deck twin-screw vessel with aft arrangement of the engine room and a superstructure above it. Nasal tip - bulbous to improve hydrodynamic characteristics. At the transom stern was an angled cargo ramp. A promising container ship had a displacement of 36 thousand tons, deadweight 20 thousand tons and was able to transport the 1231 container. The length of the ship is 227,3 meters, width - 30 meters, draft - 9,87 meters. The height of the freeboard 21 meter. The cruising range left 22 thousand miles at speeds of 25 knots. 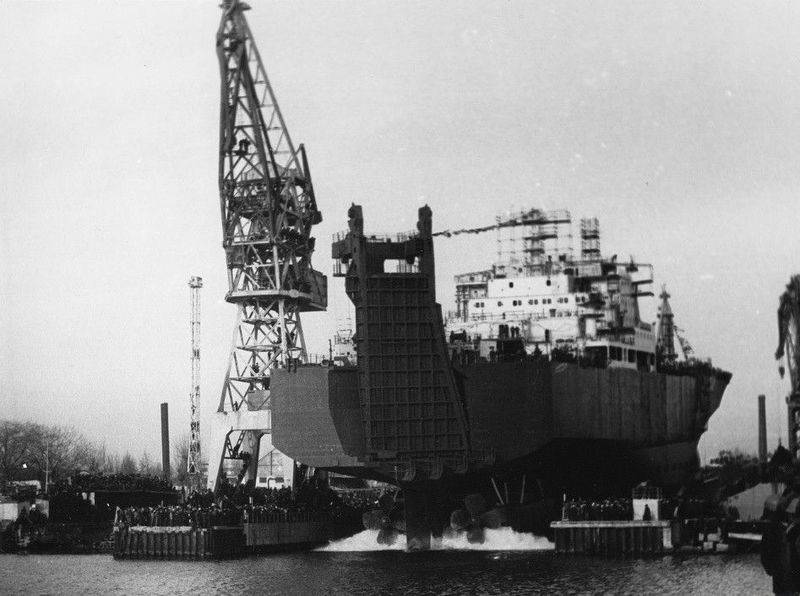 The descent of "Vladimir Vaslyaev", view from the stern. Well visible cargo ramp

The main feature of the container ship project "Atlantic" was their power plant. It was supposed to equip them with two (one for each screw) gas-turbine units "M25" power 25 thousand liters. with. each. This technical solution was originally incorporated into the project: to equip container carriers with powerful engines to achieve high speed, while maintaining the ability to work on heavy, and therefore cheap grades of fuel.

The Mashproekt research and production enterprise located right in Nikolaev was engaged in designing the power plant for the 1609 “Atlantic” project, and the units were manufactured at the Nikolaev South Turbine Plant “Zarya”. Provided remote-automated control of the power plant from the navigation control room.

It should be noted that the Atlantic container ships were not the first gas turbine ships on the Black Sea. Back in December, 1968, the Kherson Shipbuilding Plant, handed over to the Black Sea Shipping Company the first in the Soviet merchant fleet the domestic gas turbine ship "Paris Commune". The vessel was largely experimental for exploring the capabilities of a gas turbine installation. The Paris Commune belonged to the Leninsky Komsomol type of ships developed by the Chernomosudoproekt Nikolaev. Its displacement reached 22 thousand tons, and the engine power was 13 thousand liters. with.

The experimental gas turbine unit GTU-20 was the brainchild of the Kirov plant in Leningrad. To achieve the best speed characteristics, it was decided to install GTU-20 on a vessel with the most suitable hull lines. The choice fell on the Paris Commune dry cargo ship. In addition, for the first time in the Soviet merchant navy, the vessel was equipped with an adjustable pitch propeller. The Paris Commune was successfully exploited as part of the Black Sea Shipping Company right up to scrapping in 1991. Diesel fuel was used as a power supply for GTU-2, and its consumption was increased. Since the gas turbine unit was made in Leningrad in a single copy, the ship experienced some difficulties with spare parts, which the Kirov plant had to produce individually.

Serial container carriers decided to build at the Black Sea Shipyard. An additional convenient factor was the presence in Nikolaev of the manufacturer of power plants - YuTZ.

5 November 1975, the lead container ship “Captain Smirnov” was laid at the Black Sea plant. Like heavy aircraft-carrying cruisers built on the adjacent zero stocks, Atlantic-class ships were complex and fundamentally new. Sheet metal for them was processed on Kristall machines with programmed control; prestage platforms were widely used to form large sections of the hull. 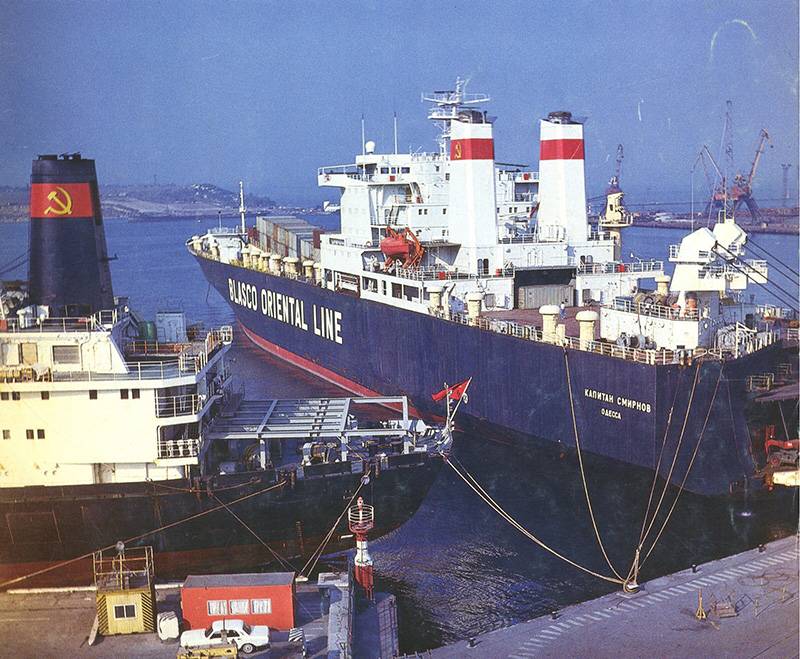 "Captain Smirnov" at the berth in Illichivsk

29 July 1977 g. "Captain Smirnov" was launched in a solemn ceremony. It got its name in honor of Captain Alexander Petrovich Smirnov, one of the honored captains of the Baltic Shipping Company. In the 1941 year, during the famous Tallinn Crossing, Captain Smirnov, who was already 67, was commanded by the ship “Ivan Papanin”. He died from the rupture of the German bombs on the bridge.

Immediately after the descent of "Captain Smirnov" there was a laying of the next container ship - "Captain Mezentsev." This ship went on the water 2 March 1979 of the year. The second ship of the series was built significantly faster than the lead ship: the completion of the Mezentsev took only 7 months (this figure was equal to 17 months from Captain Smirnov), and at the end of December it was handed over to the customer. "Captain Smirnov" was commissioned in the same year 1979.

The third container ship "Engineer Yermoshkin" laid in March 1979, and lowered 19 on April 1980. The technology of building ships was improved: the berthing period of the Yermoshkin building was shorter by 5 months than the Mezentsev model. At the end of 1980, it was handed over to the customer. 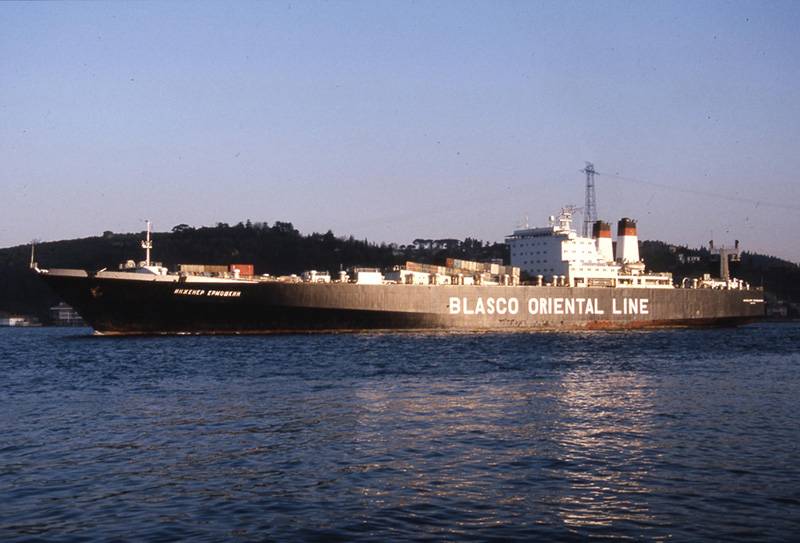 The fourth container ship was laid out a bit later - July 1 1983. It got its name "Vladimir Vaslyaev" in honor of the first secretary of the Nikolaev regional committee, teacher of NKI, participant of the Great Patriotic War Vladimir Alexandrovich Vaslyaev. This man, who had held a responsible position for more than 9 years, did a lot for the development of Nikolaev as a city and shipbuilding center. 5 December 1986, the container ship Vladimir Vaslyaev was launched and completed by the summer of 1987. 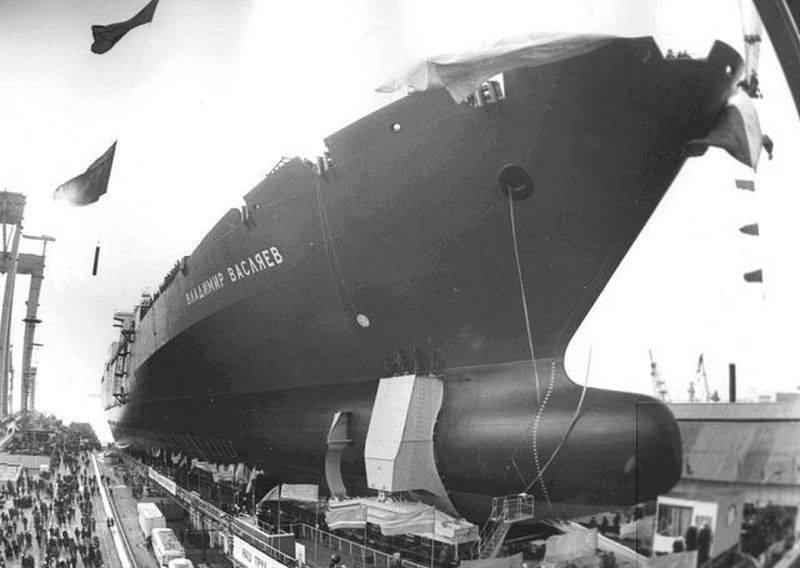 "Vladimir Vaslyaev" coming off the stocks

All four container ships were included in the Black Sea Shipping Company. They were planned to be used for long-haul flights - to Japan and other East Asian countries. "Captain Smirnov" after the entry into service was put on the line the Black Sea - Vietnam. For the 50 day he visited the 16 ports. Other container ships went to Yokohama, Nagasaki, Vladivostok and other ports. 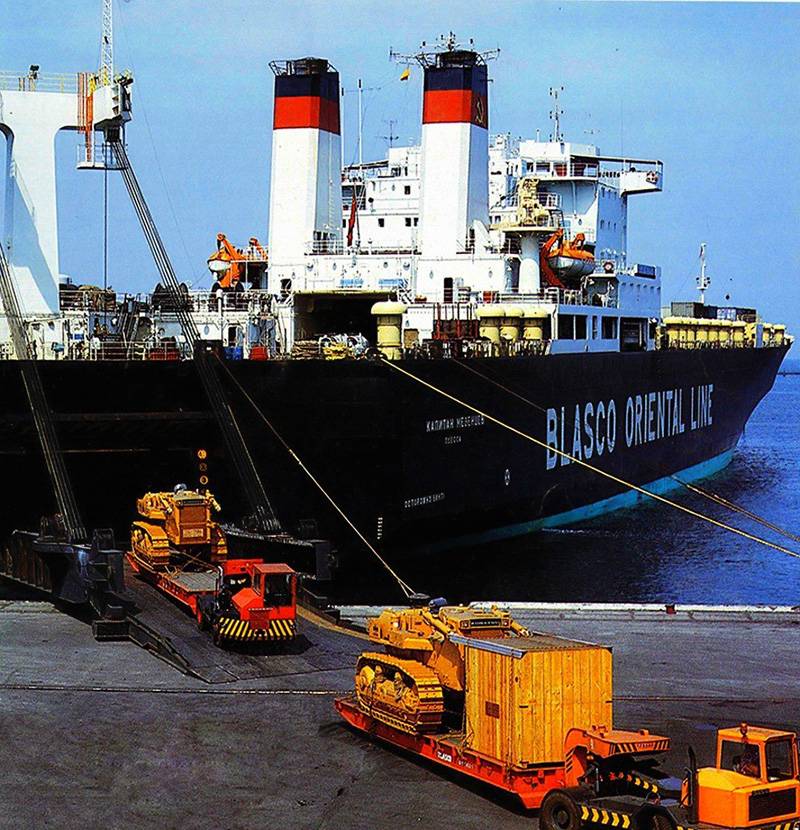 The ships absorbed a lot of advanced technologies of those years. For ease of mooring, they were equipped with nine electric automatic winches. Provided remote release of anchors from the wheelhouse. For maneuvering in the port water area, container ships were equipped with special thrusters. The ships could carry general cargo, wheeled vehicles and international standard containers. For loading and unloading operations on board, there were 14 – 15 highly maneuverable forklifts manufactured by the Finnish company Valmet.

The ships of the project "Atlantic", for all their profitability, were distinguished by high fuel consumption at high speeds, and the struggle to improve the economic characteristics continued throughout the entire period of operation of these container ships. The optimum operating mode of the two turbo-gas turbine units was worked out: the gas-turbine engine and heat recovery boiler of one side and steam turbine of the other side were in operation. Such a solution made it possible to maintain travel in 19 – 20 units and reduce fuel consumption by 25%.

The ships of the type "Captain Smirnov" successfully coped with their tasks, but in 1991, the country that created them for the national economy ceased to exist. In the whole space of the former Soviet Union, the new authorities and sympathizers began to share with fervor the colossal property they had inherited, built up over decades. The once great Black Sea Shipping Company was rapidly plundered. The container ships, which were not used in the new economic conditions, did not escape the sad fate. 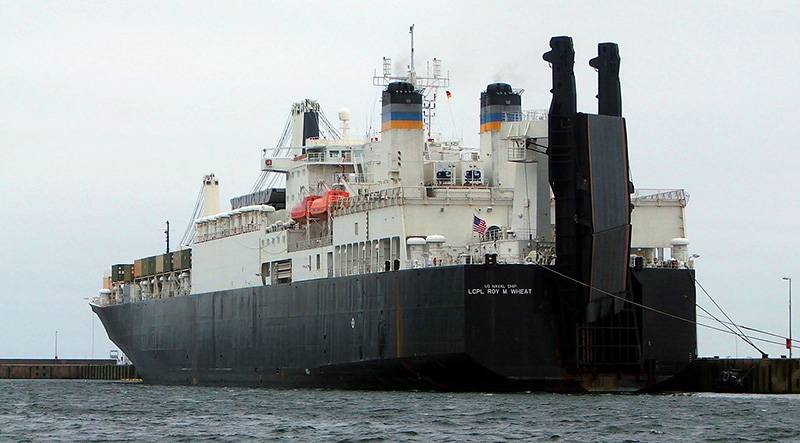 At the end of 1990's ships were sold at the price of scrap metal. "Vladimir Vaslyaev" went for 5 million dollars. At the beginning of 2000's, Captain Smirnov, Engineer Yermoshkin and Captain Mezentsev were disposed of in India. A different fate awaited the container ship "Vladimir Vaslyaev." The new, in essence, container carrier noticed the command of the US Navy and acquired it for its own needs. The ship has undergone repairs and upgrades. An additional 36-meter section was embedded in it - the displacement increased to 50 thousand tons. Additional 60-ton cranes are installed on the deck. The ship's power grid was replaced with the American one - with a frequency of 60 Hz. As a result of rework, the speed dropped to 20 nodes. Under the new name "Lance Corporal Roy Wit," the former Soviet container ship, and now the troop transport of the Rapid Response Forces, joined the US Navy.