Bazaar show. When current topics are sacrificed by TV ratings

December 18 2017
46
On the “Military Review”, they repeatedly raised the topic of the blatant bazaar of modern talk shows - those programs on the air of the central TV channels, where it would seem that cultural and educated people scream with a good language when discussing almost any topic.


Analysts, all kinds of presidents and directors of various centers of politics, geopolitics, political politics, pseudo-politics and political science, members of the lower house of parliament, members of the upper house. In an attempt to inflict an informational or disinformational blow to opponents, they even get the impression that these people are not from the parliamentary chamber, but from the chamber, excuse me, number six.

Any topic - fists "bald", and often in the literal sense of the word. One expert takes off to put on the physiognomy of another expert. He in turn (and maybe “out of turn”) yells at the whole studio about where he saw this studio along with the host of the ether, rushes in the hearts that he falls under the arm — a glass of water crumpled with paper — and flies out. ” backstage. "
Gentlemen bass and baritones try to drown down the ladies. Ladies, bringing the voice to the utmost top notes, cut through the studio with response informational attacks. In the appendage of one another, and often among themselves - frank insults, rudeness, disregard for the interlocutor. The arguments in favor of their point of view again boil down to the “fool himself!” Option. Nobody is going to give in to anyone in terms of the market level. 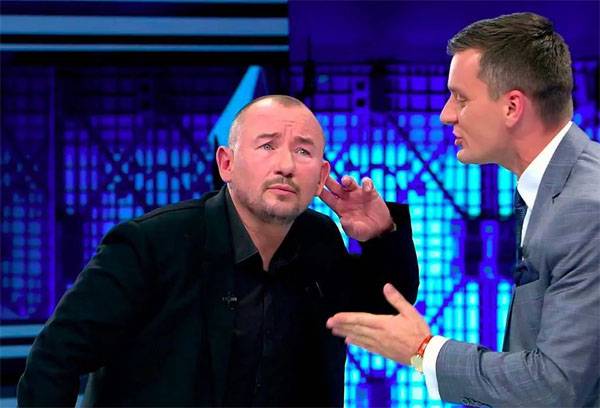 Meanwhile, political talk shows are gaining ratings. The viewer spits on the screen, but he can’t do anything with himself, having become very real dependent on this option of discussing a particular topic by respected ladies and gentlemen on the other side of the blue screen.

And it is frankly a rare case when a person appears in the studio of a federal channel who may not draw decibels, but draw considerable attention to his point of view. And to attract so that the studio calms down and goes from the bazaar mode to the mode of a handsome meeting, understanding that it is necessary to listen to each other, at least for propriety ...

You can long resent the fact that political talk shows have long become an analogue of “House-2”. And by and large, nothing to be surprised. If in our country the ex-TV host of the show of orgies to the whole country suddenly finds itself in the list of presidential candidates with the fabulous slogan “Sobchak against all”, it means that the civilized discussion has precisely ordered to live long. Although ordered to live and the discussion as such. There is no discussion. There are shouts, there is hysterics, the desire to slap in the face is also present, but there is more and more often no substantive conversation with conclusions and suggestions.

One recent example is the “discussion” of the removal of the Russian national winter sports team from the Olympic Games in Pyeongchang. Under the white flag - please, under the flag of Russia - nizzzya.

Friends, can anyone give the name of at least one human rights activist who would find in himself even a drop of courage and prepare a report on the violation of the rights of Russian athletes by international bureaucrats from sports? At least one of these human rights advocates uttered a word against the introduction of the principle, in fact, collective responsibility. Against the principle introduced by organizations that position themselves as regulators of relations in the sports and legal environment. Where are all these human rights funds, artels, groups, concilia, teams, etc., which have written in black and white about the need to protect human rights regardless of their nationality, religion, age or attitude towards politics? Everyone is silent, like water in his mouth scored.

Has anyone seen at least one “human rights activist” on the air of the talk shows mentioned, which would also come to millions of audiences voicing the position that WADA and the IOC violate international law and reanimate, in fact, medieval, “Horde” principles - when severe punishment can be obtained for the offense of a person whom you have never met in your life?

These people sit quietly like mice. No incriminating reports and statements. Full disregard for the interests of citizens. They certainly will not appear on the talk show, although it would be very interesting to listen to them. Listening to the babble of “justification” about why they advocate the protection of human rights not as systematic and comprehensive work, but as selective attempts from the “denunciation of the bloody regime” series.

And who saw on the federal channels, in which the colossal information possibilities of talk shows, were broadcast on how officials from Russian sports and sportsmen themselves threw sports arbitration with lawsuits against WADA and the IOC? Statements that “Russia is in our heart,” which looks like complacency and self-indulgence, are heard, and there hasn’t been a legal blow to the high-handed puppets of one “exceptional” superpower. No information about this. And here it would have been possible to start a male conversation in the studio - with the arguments and tension of the vocal cords. But as soon as it comes to domestic interests, honor and dignity of Russia itself - they are silent, you see ... Well, this is about the lack of talent of the economic policy in Ukraine, about the insolvency of Poroshenko or Saakashvili’s ambitions, we have to yell on air to hear each of the viewers. And when it comes to more substantive things, including protecting the interests of Russia from the arbitrariness of bureaucrats in the international arena, everyone here pretends that “my hut is on the edge,” and that Russia, you know, is in his heart. Human rights activists do not find in themselves even a drop of desire to tell us - ordinary citizens - how they stood up for this defense, or at least ready to stand up. Apparently, discussing the gay marriage of Australian deputies or not giving Ukraine the IMF tranche is much more relevant for Russia.

Ctrl Enter
Noticed oshЫbku Highlight text and press. Ctrl + Enter
We are
Situational analysis of the death of the MH17 flight (Malaysian Boeing 777), made on the basis of engineering analysis from 15.08.2014Results of the week. "God forbid to see Russian revolt, senseless and merciless!"
46 comments
Information
Dear reader, to leave comments on the publication, you must to register.