For the Russian Navy is preparing a new test. How to replay "Flight III" in peak of strategy of domination of the US Navy? 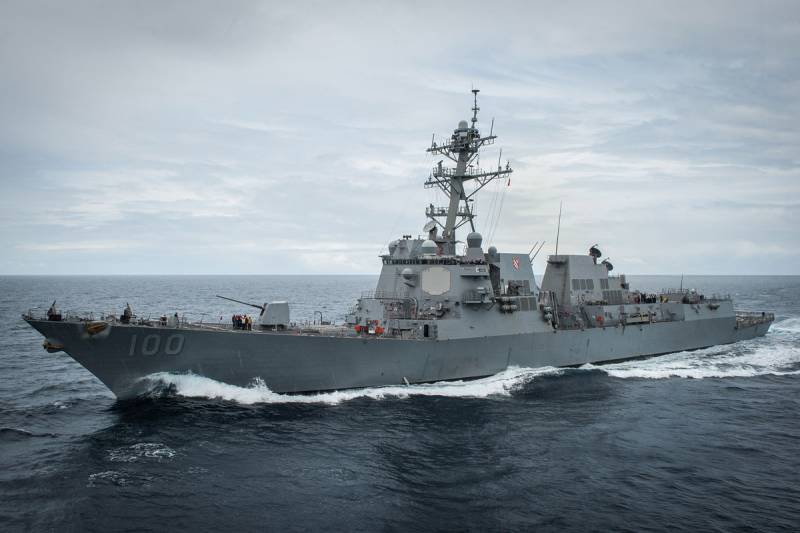 It is well known that the three modifications of the US Arleigh Burke class destroyers of the USS are currently the most successful and large-scale types of surface ships in modern stories naval forces of the world. Even despite the fact that the DDG-51 USS “Arleigh Burke” lead ship of the “Flight I” version came off the slipways of the “Bath Iron Works” shipyard just 28 years ago (September 19, 1989), multi-billion dollar infusions into the program allowed for this period launch and adopt the American fleet 62 ships in the variants “Flight I” (DDG 51-71), “Flight II” (DDG 72-78), “Flight IIA” (DDG 79-113). And until the end of the series is still quite far. In particular, the Flight IIA series will be continued and completed only on the destroyer DDG-123, after which it is planned to work on an even newer version of the Arleigh Burkov - Flight III. Here we will encounter a completely new surface ship, only structurally similar to the previous "Flight".

The main event of recent months can be considered the resumption of construction of destroyers "Arleigh Burke Flight IIA". The decision to re-commission production facilities at two shipyards at once (“Bath Iron Works”, as well as “Ingalls Shipbuilding”) has rather deep roots related to the possible weakening of the combat potential of the US Navy against the background of mass production of Chinese multipurpose destroyers Type 052D, promising EM URO Type 055, Russian frigates of the 22350 / 22350М and deep modernization of the heavy nuclear-powered missile cruiser of the 1144.2M “Admiral Nakhimov”.

The “narrow-mindedness” of the TSCEI Zamvoltov combat information and control system on the AN / SPY-3 centimeter multifunctional X-band radar with 3 antenna arrays with a much smaller aperture than the AN / SPY-1A / D blades, compresses the air defense of the new staff destroyer- "iron" only to a highly effective fight against low-altitude air attack weapons, as well as high-altitude objects, but at a much shorter range than the "Arleigh Burke" and "Ticonderoga". For the full use of the entire range of weapons of universal built-in launchers Mk 57 (after “processing” the cells can be adapted to use SM-3 interceptors and SM-6 SAMs), the BIUS operators of these ships can rely solely on target designation from AWACSs and SPY radar ships. -1.

It is quite logical that for the continuation of serial production of deeply improved modifications of “Arley Burk” the Americans will “grab hold of their hands and feet.” For example, bringing to completion of a series of destroyers of the so-called “3-th stage” (“Flight IIA”) will compensate for the decommissioning of 11 Ticonderoga air defense cruisers from 109 operation and, as a result, preserve today's superiority over the Russian and Chinese fleets combined , in terms of anti-aircraft capabilities and the ability to carry out a massive missile strike with strategic sea-based RGM-62E “Tomahawk Block IV” sea-launched cruise missiles. The disadvantages of the Aegis system associated with one target channel of the tracking radar and the AN / SPG-3 illumination (4 RPN on the Arley Burk EM and 174 units - on the Ticonderox) are already partially compensated by the introduction of ultra-long-range anti-aircraft missiles RIM-120 ERAM. By equipping the missiles with modernized large-aperture variants of the ARGSN URVB AIM-7C-62, the firing process can be implemented to bypass the SPG-1, based only on the coordinates transmitted from the decimeter AN / SPY-16D (V) or airborne X-ray radar by radio channel on the radio channel through the radio channel by means of a radio channel AN / SPY-XNUMXD (V) or airborne radar means by radio channel Link-XNUMX.

The Arleigh Burke squadron destroyers upgrade program to the level of the 4 Stage (Flight III) is already a much more promising and ambitious action than the Flight IIA. It is designed to provide not only numerical, but also technological superiority over the ships of our and Chinese fleets. The main range of work on the 3 Flyte will be placed on Raytheon’s specialists, specializing in the design and manufacture of anti-aircraft missiles, launchers, air combat missiles, tactical and strategic missiles, as well as radar systems for various purposes and basing.

The main part of the destroyers "Arleigh Burke Flight III" will be a radically different configuration of radar equipment. Its heart will be the advanced dual-band multifunction radar AN / SPY-6 AMDR. The new brainchild from Raytheon will be presented with an upgraded 4-sided S-band antenna post AMDR-S (with a frequency of 4-6 GHz) based on the AN / SPY-1D radar (V), as well as a brand-new 3-side antenna station X-band AMDR-X (with a frequency of 8-12 GHz). Four canvases of active phased antenna arrays of the decimeter range of the AN / SPY-1D type form the old X-shaped radiation pattern, which allows to achieve an 360-degree view with a backup “peaks” overlap. This means that in case of failure of one of the canvases, its sector of the review will be partially compensated by the adjacent antenna arrays. The decimeter antenna post is intended for detection, tracking of objects, as well as for targeting missiles with active radar seeker.

The second AMDR-X antenna post is located on an additional superstructure (approximately 7-10 meters above the S-band). Its antenna arrays form the so-called “reverse” Y-shaped spatial scanning zone, in which the front hemisphere is processed with one antenna web located on the front edge of the additional superstructure, and the side and rear hemispheres are 2 with rear blades having 40-degree camber from the longitudinal axis the ship. This 3-side multipurpose radar is based on active phased array using gallium nitride (GaN), which will significantly increase the radiation power and improve the signal-to-noise ratio. Galitium nitride transceiver modules can operate at temperatures from 300 to 400 ° C (the melting point is about 2500 C °, while the arsenide-gallium modules have a critical operating temperature of about 180 ° С and the melting point is 1240 ° С. In contrast from single-channel AN / SPG-62 continuous radars, each AMDR-X antenna is multichannel and can realize simultaneous linking of hundreds of aerial targets and capture more than 10 targets. What follows from this?

For the first time in the history of the existence and modernization of ships with combat information and control "Aegis" on board, a full-fledged opportunity to simultaneously capture 22 or more air targets using medium-range interceptors RIM-162 ESSM equipped with semi-active radar GPS will be achieved. Recall that the state Aegis in existing versions can simultaneously fire 3 or 4 air targets depending on the number of single-channel AN / SPG-62 spotlights, while the 18 figure is the number of simultaneously corrected AN / SPY-1A / radar D (V) anti-aircraft guided missiles awaiting distribution to one of the “released” on-load tap-changers AN / SPG-62. AN / SPY-6 AMDR completely eliminates this problem, and this is another trouble for our anti-ship missiles. The fact is that in addition to high bandwidth and fire performance, AMDR is also added in 4 a larger arsenal of small-sized RIM-162 ESSM. 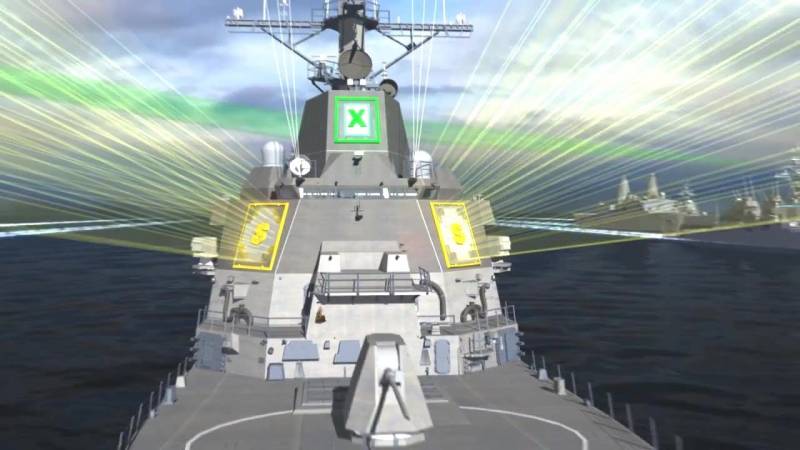 These missiles have a diameter of 254 mm, so that the number of 4-x units can be placed in special unified containers Mk 25 installed in a certain number of cells of the universal TLU Mk 41. So, in 29 free transport-launching cells of the bow of the UHF Mk 41, the 116 interceptor missile ESSM + 61 missile RIM-174 ERAM can fit. Such an arsenal can only be surpassed by the anti-aircraft “equipment” of the heavy nuclear missile cruisers of the 1144.2 Peter the Great projects and the Admiral Nakhimov 1144.2M. The latter is in priority, because thanks to the introduction of the new Polyment-Redut complex with super-maneuverable anti-aircraft 9М96DM with a diameter of 240 mm ammunition in the field of old revolver PU B-204А can be increased exactly 4 times (from 94 to 376 missiles)! Recall that the ammunition of 5B55PM and 48H6X2 anti-aircraft missiles of the KZRK S-300F Fort and C-300FM Fort-M in TARK Ave 1144.2 is 48 and 46 units, respectively. At the same time, the situation with the 9М96DM interceptor missiles, which have no analogues among Russian-developed antimissile systems, is still not clearly defined. There is no information about regular successful trials of 9М96Е2 missiles from both the corvettes of 20380 Ave and the frigate 22350 Ave. Admiral Gorshkov, and from the C-400 "Triumph" air defense missile system, and the time is not worth the amount RIM-162 "Evolved Sea Sparrow Missile" anti-aircraft missiles increase exponentially. What is the threat to the potential of our Navy could lurk in this rocket?

To ensure the interception of complex air attack weapons that carry out anti-aircraft maneuvers with overloads around 18 - 20 units, RIM-162 ESSM are equipped with a gas-jet thrust vector deflection system, represented by 4 heat-resistant rotary planes in the rocket nozzle channel. This auxiliary control allows the rocket to maneuver with overload in 50 - 60 units. (but only at the moment of burning out the dual-mode solid-fuel charge). During this period, RIM-162 is quite capable of intercepting with anti-ship missiles such as Onyx and with 30%, such heavy anti-ship missiles like the V-40 Vulkan and P-80 Granit with the 1000-700%.

Many may include hurray-patriotism and begin to be interested in the sources from which this information is extracted. However, a technical-savvy person will be able to understand that both “Volcanoes” and “Granites”, in addition to powerful kinetic energy, also have a large mass, which does not allow maneuvering with overloads of more than 15 units. Consequently, to intercept an ESSM anti-missile it will be sufficient to go to an overload in 40 - 45 units. It is for this reason that today we are witnessing a transition from the aforementioned anti-ship missiles to more compact and “vertex” Onyxes, which can boast even an order of magnitude and a half with a smaller radar signature. Despite the fact that, technologically, our new frigates of the 22350 Ave., the modernized cruiser Admiral Nakhimov, as well as improved multi-purpose nuclear submarines of the 949 Ave. Antey (despite more ammunition of anti-aircraft and anti-ship weapons) noticeably ahead of the advanced American destroyers Arleigh Burke Flight III, the number of batches of our warships will be inferior 7 — 8 times. Against the backdrop of substantial delay with the fine-tuning SAM 9M96DM it only shows that the temporary key to the problem is to move the majority of Maple and diesel-electric submarines in the supersonic ASM 3M54E1 "Caliber-NK" and 3M55 "Onyx" with early intensification of works of "zirconium" in order to continue to stay on the crest of a wave.