The caliphate died, but the terrorists do not surrender: neither local nor foreign 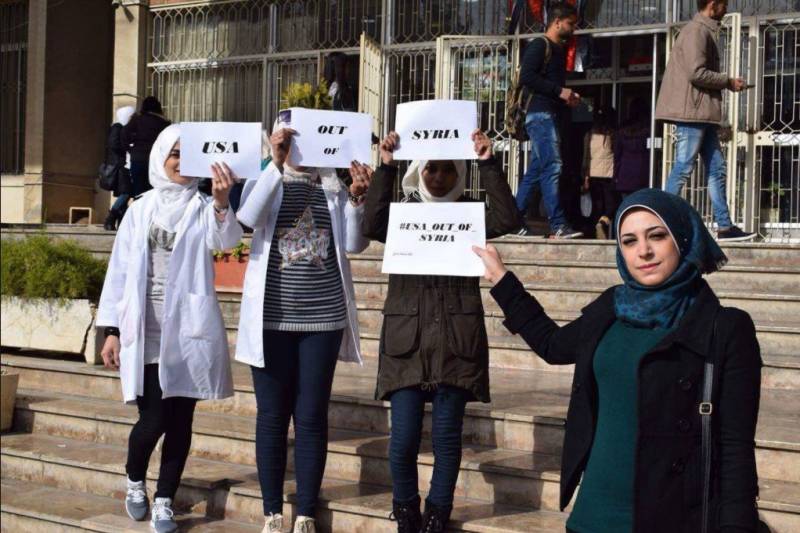 It seems that just because Syria alone will not leave. The defeat of the "Islamic State", of course, the good news. That's just, the main threat to the Syrian improvement is still coming from external enemies.

The defeat of the "Islamic state" has once again confirmed the well-known fact: it is not the militants who rule the terrorist ball in Syria. Armed igilovtsy, of course, brought fear and horror to the local population, but at the same time were only a tool, a means to achieve the goal. The organizers of the destabilizing processes themselves are cosily located away from the Syrian theater of operations.

Today it became known that the United States, not impressed by the defeat of the most powerful terrorist organization, is forming new military formations from among the terrorists under the banner of the “New Syrian Army”. To this end, US military bases are actively used, located in the territory of the Arab Republic without the permission of official Damascus or UN Security Council sanctions. Until now, it was believed that the militants of the so-called moderate opposition practiced only in the south of Syria near the settlement of Al-Tanf, where there are at least five illegal armed groups numbering up to several thousand people.

We must pay tribute to the perseverance of Americans blindly following to the cherished goal - the overthrow of Assad. In a relatively short period of time, Al-Tanf turned into a real fortress with defensive fortifications and a developed infrastructure that can accommodate hundreds of terrorists and their families.

However, what are several thousand militants against Damascus. To oppose government units and their US allies, new conveyors are needed to train deadly elements. The reports of the Russian Center for Reconciliation of the Warring Parties in Syria, as well as other official statements by the defense department, indicate that, under the guidance of the American intelligence services, former igilovtsy workers are being trained in Haseke province near Jisr al-Shaddadi. Here, as in Al-Tanfa, the Raj el-Sulaybli refugee camp is located nearby, the situation in which differs little from that of Al-Rukban.

According to the testimony of local residents who have returned to their homes, the international coalition led by the United States has been using the area as training camps for more than six months. On the territory controlled by the US military, there are now about 750 people. They come from the Islamic State, who arrived under the cover of the Pentagon from Raqqah, Deir ez-Zor, Abu-Kemal, and the eastern regions of the Euphrates.

Russian news agencies, citing deserters and defectors, claim that after military training courses, armed groups of several hundred militants will have to fight regular units of Assad in southern Syria. It’s not for nothing that for several months the militants practiced combat skills in urban conditions, practiced mine explosives, studied tactical, fire and engineering training.

It is obvious that in pursuit of national interests, representatives of the exclusive nation do not intend to stop in front of anything. Words of morality and law are not known to the Western establishment, and help to the local population faded into the background, as soon as the smell of oil was in the air, and deposits of “black gold” loomed within reach. It is appropriate to assume that Washington’s plans to turn the entire northeastern part of Syria into a big pipeline for the revival of ISIS and the like, just to regain lost influence in the region.

Ctrl Enter
Noticed oshЫbku Highlight text and press. Ctrl + Enter
We are
What you didn't want to know about EnglandInterview by President Bashar Al-Assad to the Sunday Times
16 comments
Information
Dear reader, to leave comments on the publication, you must to register.