Germans in Russia, or Who financed Kohl in the Bundestag?

December 18 2017
70
It is clear that the topic of the boy Kolya in the Bundestag has already got everyone, but then some facts emerged that are worth mentioning separately. 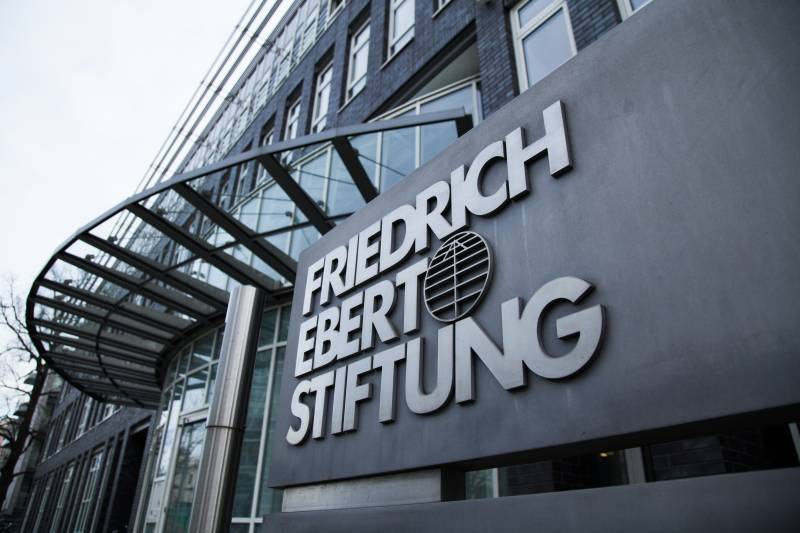 According to the information received, which the Germans do not deny, by the way, the trip of the Urengoi schoolchildren was sponsored by the German Friedrich Ebert Foundation, who provided a special grant for the Novy Urengoy gymnasium for research on the Second World War.

Once this has begun, it is possible to completely trust the information that it was the fund’s leaders who drew a page for Kolya with allegedly “his” performance. And that's why.

Angry Russian hackers dug up that the biography of the unfortunate Georg Rau was published on the website of the newspaper Suedkurier in March of this year.

Georg Rau, publication from 8 March 2017 of the year

So Kolya didn’t ride to distant lands in any Rossoshka, especially since the Germans in the text explicitly state that the cemetery in Rossoshki was transferred, and Rau Ish to be among those buried there, in a mass grave among other prisoners of war.

So he couldn’t drop a tear on any grave of Rau Kohl. Because of her absence as such.

But that's not the point. The main question is: what kind of foundation is this, named after Friedrich Ebert, and what has the foundation forgotten in our area? More precisely, in Siberia?

This foundation was formed immediately after the death of Friedrich Ebert, in 1925, according to his will. Ebert was a very large political phenomenon in stories Germany, and even the chancellor had time to visit.

The foundation named after him is a very large non-profit foundation, and, as is customary in Germany, every such foundation is nailed to a party, then the Ebert foundation is “friendly” with the Social Democratic Party of Germany (SPD).

Naturally, in our country the foundation is primarily engaged in building civil society and democracy. The following areas have been announced:

- familiarization with democratic values;
- research activities;
- democratization of the public sphere;
- increase public activity of citizens;
- support for independent media;
- assistance in resolving conflicts in the state and society without the use of force.

In general, from the list it is clear what the fund breathes, as they say. And where you can find traces of his work.

The authors of this research, with the permission, are the senior lecturers of the Novosibirsk State University A. Anisimov and O. Echevskaya.

Materials are in the public domain. Who wants to - learn, ("Siberian: community, nationality or state of mind?"), who does not want, believe the word read. That's how separatism is, to be honest.

In the work “Sibiryak: community, nationality or state of mind?” One can easily trace the attempts to single out the population living in Siberia into a separate national-geographical group. This, if not separatism, is the path to it. Hint, let's say so. And here we should think about who should be, but ...

The Foundation pays trips to European countries to incorporate the ideas of a democratic society, including the understanding of sexual minorities. But this is normal for Europe in general, there is nothing to even comment on. LGBT people should be understood and accepted into the common human family.

That is why the Ebert Foundation from Irkutsk and Barnaul exported activists to Germany and Denmark to the seminar "Minorities and Democracy." With a visit, of course, various gay and aegean facilities and events. It was necessary to show and prove by living examples that we have an unfree and undeveloped country that adopted a law banning the promotion of sexual minorities among teenagers.

However, the largest and most significant of the events in Siberia, for which not only Germans generously allocate money, is the annual summer political science forum in Barnaul, headed by Vladimir Ryzhkov. Yes, by the same token, which, along with Milov, Nemtsov, and Kasyanov, roared in the PARNAS party.

Currently, Ryzhkov is a professor at the Higher School of Economics (surprisingly, really?), A political columnist for Novaya Gazeta, author and presenter of analytical programs on Ekho Moskvy radio station (Interception, Price of Victory; previously also Smoke of the Fatherland , “Beware, History” and “Myths about Russia”), chairman of the public movement “Choice of Russia”.

It is generally understood, is not it?

This opposition Barnaul Sabbath has been gathering a bunch of public figures with a dubious reputation for years. And nothing, fly together as much as possible, regardless of the costs. The office pays far from Moscow.

German (and not only) political experts from various German institutions, including from party funds, are always present at the gathering.

What it is talking about between German consultants and Russian “oppositionists” is hard to say. Yes, something is published, but the most important thing remains behind the scenes. Well, really, fools are going there?

By the way, all these grumbling in Siberia (Novosibirsk, Barnaul, Irkutsk), attempts to derive the image of some "Siberian people", "Siberian national-cultural identity" - it's not just that.

Our Siberian readers will correct me, but in the memory of 90 in the middle something was postponed about the Siberian Republic, independent and independent of Moscow, no?

In general, the activities of the fund are clear and understandable. The only thing that is not yet completely clear is the common affairs with the structures of Gazprom, together with our oppositionists. Whether Putin’s friend Miller doesn’t know how his subordinates are friends with the foundation, or ...

And the cherry on the cake.

In Belarus, the activities of the Ebert Foundation is prohibited. Completely You can talk a lot about how clearly the chairman Lukashenko taxis his collective farm, but the fact is - the foundation was set up long and forever.

And in Turkey, under President Ahmet Sezer, there was a fierce scandal in 2001-2002, during which it turned out that representatives of the Friedrich Ebert Foundation combined "the pleasant with the useful" while working for German foreign intelligence.

On the whole, in my opinion, the FSB should no longer be involved in the media, but in the work of the Friedrich Ebert Foundation in Russia. Definitely, it's time. Despite the "friendship" of the fund with Gazprom and the possible economic consequences.

Ctrl Enter
Noticed oshЫbku Highlight text and press. Ctrl + Enter
We are
Reports from the militia of New Russia for 27-28 September 2014 of the yearResults of the week. "Well, do not change me because of every idiot!"
Military Reviewin Yandex News
Military Reviewin Google News
70 comments
Information
Dear reader, to leave comments on the publication, you must to register.