December 19 2017
62
A lot has already been said on the topic of political olympic games, it is difficult to add something else. The whole Russian audience was divided not in two parts, and nothing can be done about it. 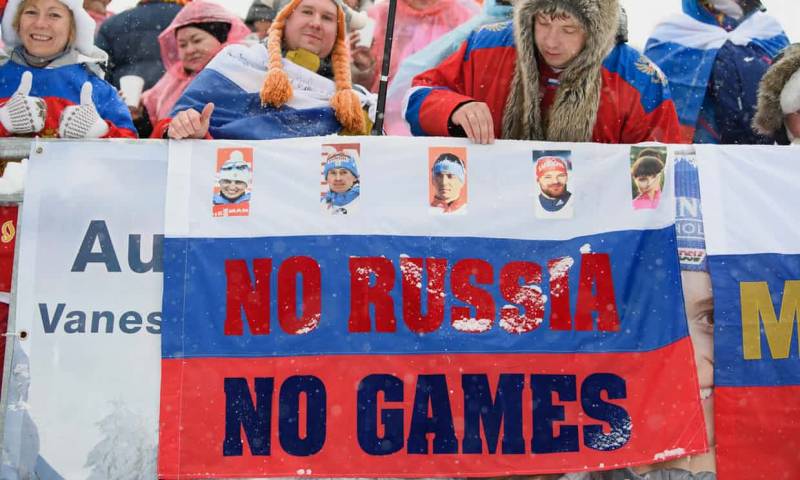 Some, who consider themselves patriots, hurl thunder and lightning at the heads of sportsmen and officials from sports, the second fill the information space with tears on the theme of “we will all get sick” and “our will win”.

In order to write all these reflections, I spent quite a lot of time studying the documents. All the rubbish, which is called the Olympic Charter and which can be scored, because everything that happens in the Olympic world today, the charter is simply not provided. And all these statutes and regulations are simply not executed.

The second pack is our modern army regulations. Dope, say? By no means. The statutes, they are executed, and we have had a lot of examples before even this year. Well, it is necessary at least from something to push off, if you start talking about patriotism?

And patriotism is registered in the Charter of internal service. Black and white, starting with the first chapter. Item 16 and below. That is, love, respect and reverence for one’s country is fundamental to a soldier. Fine? Fine.

As I speak about protection, in principle, it does not matter what it is: integrity, interests, honor. Therefore, since many people today actually equate honor (this is what athletes protect), integrity and interests (these are warriors), then let's consider all this through the prism of the Battle Rules.

So, in accordance with the above, the soldiers protect the country and its interests. His country, and, as an example of Syria, the interests of his country.

The athletes have their own war. They defend the honor and dignity of the country in the fields of peaceful sports battles. Well, almost peaceful.

And then the question is: whose? Russia? Where can I see it? If there is no flag, anthem, coat of arms and other symbols?

These are no longer representatives of Russia, since Russia does not exist, they are the very “ikhtamnets”.

Apparently, "ihtamnet" becomes a kind of trend with us. There is no one anywhere, and it does not upset anyone. I'm lying, it upsets me.

It upsets me that the military officers “ichthamnets” are forced to be them, because the chiefs demanded that in accordance with the charter. But I have already spoken so much about this that I do not want to repeat.

But even more frustrating is the fact that all former representatives of our Olympic team rushed with joy to the unforced ichthamnets. Former - it is clear, there is no national team, it means ...

So they are all like “vacationers”. They'll just go for a ride for themselves. And no one will reproach them for anything, they just got ready.

For comparison, I will quote one of my familiar major in stock from the Strategic Missile Forces. He, you know, also prepared all his life. And the entire service sat at the very button, after which "the whole world into dust." So what?

Many will say, well, you found someone to compare. Skiers, skaters, hockey players and military. Why, I found it. And compare. For above, in principle, proved that they are doing the same thing: protection. Each of his direction. But - protection.

Very similar. None of our statutes contain a word, by the way, that a soldier is obliged to give his life to fulfill his duty. Who does not know, the words of the Soviet oath "I swear to defend it courageously, skillfully, with dignity and honor, not sparing my blood and life itself to achieve complete victory over the enemies" were removed from the modern text.

So it is not necessary to die. But they die, cause fire on themselves, undermine themselves with the last grenade to take with them more enemies, close their comrades with them.

Forgive me for the high level of words, the historically developed qualities of the defender of the Motherland. Russian defender.

Let's return to sports "defenders". I will not reveal anything new, all the facts are taken from the previous political show in Rio. The fact that it will be so in Korea is ready to directly bid.

What will wait for the company of ichthamnet masochists? Do not understand from which country in Korea? A complete set of joy for the masochist.

The fact that two or three employees will walk behind each with banks and test tubes around the clock, collecting samples, will not surprise anyone.

Fans of the western teams will greet with a combination of the exposed middle finger, shouting insults.

The media will bet on who else will be punctured on doping tests. Vanguey, that those who will show good results will be pierced. Although where to get good results, if all more or less applicants for medals have that?

“Pure” asthmatics from Norway and mentally distressed from the USA will again demonstratively leave the pedestals and refuse to be photographed. Well, this is in case someone gets to the pedestal.

The judges will very closely evaluate all the performances, so that none of these, do not understand where, did not get to the medals. And if anyone gets, and you can take away. Without waiting for the court, according to the "clean", which ranked below.

As a result, the ichthamnets will be given a dozen medals from the bounty, as there is no team, there will be no team place, but at the closing, it may be allowed to carry the Russian flag.

Very fine move, by the way. Let the whole world see that without a barrel of meldonium and a basket of methyluronyl acetone, these Russians are not capable of anything.

Given the sheer impotence of our Ministry of Sport and the Russian Olympic Committee, the whole world will consider it that way. At this point, the foreign media will try with all their heart, but we will have nothing special to cover.

And when Ihtamnets come back, having earned their money from the IOC and sponsors, I’m sure they will participate in TV shows on various channels and cry, “how hard it was there,” shedding a stingy Olympic tear about unequal conditions, judges bias, harassment and universal contempt .

I say, a team of masochists from the sport.

But everyone is happy with everything, because “stuffed or carcass”, but they go, counting up the fees in advance and anticipating profits from pseudo-patriotic talk shows, where they will tell you who are goats in the IOC.

And the TV channels will tell us in unison that “we won, no matter what”. That every medal scratched in Korea is a real feat, comparable ... No, I will not compare it myself, let's see what we come up with.

Oh, and plus handouts. BMW, "Mercy", flats ... Everything, as expected. After all, already purchased, do not throw away the same ...

This is how it turns out, the case seems to be one thing, but the "ichtamnets" are different. Some really defend their country in particular, and the Russian world in general, the second - their wallets.

Although, the glory of the self, modern military "ichtamnets" even began to receive money from obscure accounts. Already a plus.

And heaps of those who broke through to the Donbass and were not there either ... Well, at least they didn’t receive the deadlines, as their Belarusian comrades in armsand that bread.

Our defenders of Russia are different, oh, what different ... And sports barges, and their chiefs-officials do not stand in one row with Prokhorenko, Nurbagandov, Romanov, Khabibullin. Although doing almost one thing - protect the interests of the country.

But let's take a broader look. Not on defenders, on Russia.

A huge country, with a huge number of interests, which also need to be protected. Tell me, is Lavrov and Churkin - the defenders of Russia? I think everyone will agree.

And the guys from the Ministry of Emergencies, putting out fires and raking up rubble? And the men in the factories where they do Tanks and machines? And the doctors who, having heard the ministerial nonsense about the fact that they get 50 thousand rubles a month, going to pull us out of the other world all for the same 20-25? And the teachers who train those who will extinguish fires, rake rubble, build and repair tanks, save people?

Yes, we have half the country, if not more, is engaged in precisely what protects the interests of the motherland. A rocket with a satellite that did not crash at the start is from the same opera.

Sorry, I will deny the right to be called the protector of all office managers and bankers. They are just from another company.

Go to the mirror, dear, look into your eyes. And give the answer yourself who you are, based on the foregoing. I am sure that most will agree that, yes, we are defending both the honor and the interests of the country.

And, by the way, every day, without screaming on TV, without suits from Bosco (I recommend to look at the prices on the site) costing just the average monthly salary of many, without traveling to camps and business trips to warm countries in the winter, without advertising contracts, without personal sponsors, without donated apartments and Mercedes and Audi.

In Tomsk and Omsk, Samara and Yaroslavl, Nizhny Tagil and Murmansk, Vladivostok and Petropavlovsk-Kamchatsky. Every day, all over the country.

In accordance with the military regulations.

See for yourself if you remove the words "military" and "military" from the chap. 1 of the p. 24, what is the result?

“Everyone appointed to a post has official duties that define his authority, as well as the volume of tasks to be performed by him in accordance with the position held.”

"Official duties are performed only in the interests of the service."

“Official duties and the procedure for their execution are determined by federal laws, charters and other regulatory legal acts of the Russian Federation, as well as the relevant manuals, manuals, regulations, instructions or orders of superiors, as applied to the requirements of this Charter.”

What is the result? But in the end it turns out that if you look at the modern realities through the prism of a military document such as the charter, then we still have many defenders of Russia. And this is not a matter of sexual characteristics or a military ticket.

Here the matter is who is engaged in what and how.

Patriotism is a thing that cannot be bought. She is either in the brain or not. When it is, do not need calls and campaigning. Everyone goes and does what they can from day to day. And if it does it well, it means for the good of the country.

Unfortunately, this cannot be said today to the majority of representatives of our elites. Sports, financial, political, cultural. It is necessary to change and change a lot. Even if in the image and likeness of military regulations.

Ctrl Enter
Noticed oshЫbku Highlight text and press. Ctrl + Enter
We are
America vs Russia: Doping WarsResults of the week. "Well, do not change me because of every idiot!"
Military Reviewin Yandex News
Military Reviewin Google News
62 comments
Information
Dear reader, to leave comments on the publication, you must to register.