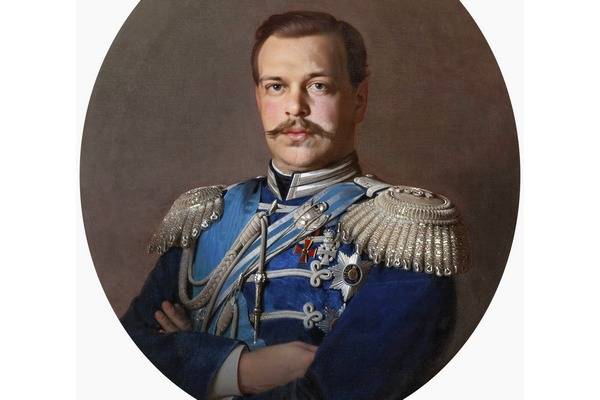 12 December 1877 of the year in battle near the village of Mechka. The Eastern detachment under the command of Tsarevich Alexander Alexandrovich defeated the superior forces of the Turks.

Emperor Alexander II was preparing his second son, Alexander, for a military career, since the elder son Nicholas was to take the throne of Russian autocrats.

Alexander Aleksandrovich, according to the custom of that time, was identified as chief of the Astrakhan Carabinieri Regiment at birth, from an early age he was an observer of constant military ceremonies, stood on a clock in his soldier uniform of the Pavlovsky Regiment, whose chief he was at the opening monument to Paul I.

In 8 years he began to study science, among which was the art of war. In the 19 years, the crown prince commanded a rifle company of the training battalion at the training camp; in 21, he had the rank of lieutenant general in the year. However, the future emperor had to accept the baptism of fire only during the Russian-Turkish war of 1877-1878.

He met her, while in the army in Chisinau, with his father. And soon he was appointed commander of the Eastern (Ruschuksky) detachment of the Danube Army. The 70-thousandth detachment covered the eastern flank of the army and for the entire campaign did not give the Ottomans the opportunity to inflict a serious blow on the Russian troops.

Mehmet Ali Pasha (he was an ethnic German who converted to Islam), the commander of the Ottoman army, which was significantly outnumbered by the Eastern detachment, never attacked him. Obviously, the Turkish military leader believed that once the heir to the throne was in command of the throne (the elder brother Nikolai had already died by that time), he must be very strong. The Tsarevich himself believed that the Turks had missed a favorable chance to strike at the Russians more than once. He also saw the lost opportunities of the Russians, the plan proposed by him and his brother Vladimir, the commander of one of the corps of the Eastern detachment, was much better than the plan of the war minister Dmitry Milyutin, and allowed him to end the campaign before the onset of cold weather. However, Alexander II and the military council accepted the plan of the minister.

Active actions by the Eastern Turkish army resumed after the change of commander, Mehmet-Ali-Pasha was replaced by Suleiman Pasha, the first battle took place 14 (26) November 1877 of the year near the village of Mechki (modern Ruse region of Bulgaria), and ended with the defeat of the Turks. In the same place, the Ottomans, not knowing about the fall of Pleven, tried on November 30 (December 12) to take revenge, but also unsuccessfully.

“By 10 in the morning,” the report says, “the enemy opened artillery fire from 20 guns mounted on the heights near the village of Pirgovo. His infantry went on the attack, but our troops repulsed it with strong rifle fire. ”

The eyewitness of the events, the sister of mercy Julia Vrevskaya, who sold her Oryol estate to organize a sanitary squad, at this time, together with two other sisters, will bandage the wounded in the neighboring village Obretenik, she writes that she “saw flying projectiles and smoke” from a distance. That is, the battle was quite fierce.

All enemy attacks were repulsed by the Eastern detachment, the counterattack overturned the Turkish camps and forced them to flee. Suleiman Pasha himself was nearly captured.

The activities of the Eastern detachment dryly summed up the authoritative war minister Milyutin: "Remaining 5 months in a defensive position and taking a long line against a significantly superior enemy, the Ruschuksky detachment fulfilled its task, never having suffered defeat."

And the sovereign awarded him the commander of the Order of St. George, II degree. In this big battle, the Turks lost up to 4 thousands of people, Russian losses were minimal, according to Aleksandr Aleksandrovich, “officers were about 25 people, of whom 3 or 4 were killed ... the lower ranks were killed before 90 people and injured 500 with something”.

As historian Ivan Dronov writes, God kept the detachment of Tsarevich Alexander "from bloodshed, as he then kept the whole of Russia from the wars during 13 during the years of his reign."