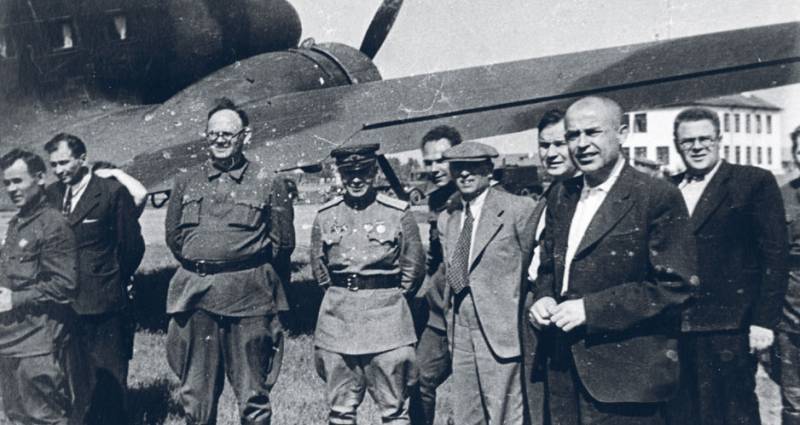 Vyacheslav Malyshev’s Narkomovsky debut was held on 6 February 1939 of the year, that is, when Europe smelled of war. He headed the People's Commissariat of Heavy Machine Building of the USSR, formed the day before.

Malyshev quickly set priorities in the work of the entrusted industry and clearly formulated them in his speech at the XVIII Congress of the CPSU (B.). In essence, a “road map” was proposed for the military-industrial complex segment, tied to heavy engineering. Malyshev's considerations found support at the very top. From October 2, 1940 to September 11, 1941, he was the People's Commissar of secondary engineering of the USSR, and in the first place tank industry.

In the Great Patriotic War, Malyshev will deal with this industry both as deputy head of the Soviet government and as a relevant minister. It is known that 11 of September 1941 was created by the People’s Commissariat of the Tank Industry (“Lesson Three: First of all”). Malyshev led him almost the entire war, except for the period from July 14 1942 to June 28, 1943.

I had to solve equations with many unknowns. It was necessary to surpass the enemy in both quantitative and qualitative parameters. And this is when our tank losses looked simply catastrophic, when it became clear that the Red Army would not hold the territory where the enterprises that formed the core of the Soviet tank industry were located. It was necessary to evacuate them as soon as possible and fully integrate them into the military-industrial complex of the rear zone. The industrial landscape of the east of the USSR was to be expanded at the expense of new plants, the final products of which included KV, T-34, T-50, tank diesel engines. A number of enterprises redeployed to the issue of tanks. Malyshev brilliantly solved all the listed tasks.

Under his leadership, made a technological breakthrough in the tank industry. The brain trust was the brainchild of the People's Commissar - Research and Development Center. The conveyor assembly has acquired real outlines, multi-cutter, revolving machines and even semi-automatic machines have been integrally integrated into the production process. Tank Commissar announced yesterday forging parts and headed for casting. Soviet tank makers pioneered the casting of large steel parts in metal molds. Over time, Malyshev decided to stamp. The corresponding technology was brought to mind and took a firm place in the tank-industry, displacing the casting. By all measures, the transition to stamping towers was unique.

Malyshev made the most of the inventive talent of the “welding genius” Eugene Paton. Speech about automatic welding of tank corps under the flux ("Lesson two: you need to think before the fight"). The People's Commissar decided to test the unique technology at the plant number 183. Why there? The fact is that this plant was the leading manufacturer of Thirty-Four, which prevailed throughout the war in the Red Army tank park. The introduction of high-speed automatic welding (ACC) passed without a hitch. It will take quite a bit of time, and the ACC will be used in all tank factories. Here, the expression: “To kill two birds with one stone” is just the way. Previously, physically strong men who had knowledge and skills at the level not lower than a vocational school graduate from FZO school were engaged in welding of tank corps. There was clearly not enough of those, which the Commissar knew perfectly well. With the introduction of the Paton method, everything became exactly the opposite. Women, adolescents 14 – 15 have been very well managed with ACC. The complexity of manufacturing case "thirty" decreased eight times.

Malyshev managed the industry not from the Moscow office, but trying to visit the field as often as possible. The People's Commissariat was in Chelyabinsk, but it happened to look death in the eye. Tankoprom cases were brought to Stalingrad by Malyshev at a time when the city was subjected to continuous shelling. Here the People's Commissar was one in several faces. Day and night he supervised the release of tanks at the local tractor factory and formed from the workers armed detachments that stood to death, defending both Stalingrad and their own enterprise from the enemy. Then the volunteers came under the command of commander Vasily Chuikov.

The People's Commissar took as a rule the strictest demand from both himself and his subordinates. But he never slipped into tyranny, made it clear to the criticized that he was guided only by the interests of the cause.

Tankoprom was under the personal control of Stalin. During the war years, it is estimated that Malyshev visited the head of the Soviet state 107 times. That is, they met every 13 days.

In the post-war period, the main place in Malyshev's activity was occupied by the search by the Soviet military-industrial complex for answers to the challenges of the global military-technical revolution. The foundation was laid for achieving strategic parity with the United States. At first, atomic affairs partially coincided with the functional responsibilities of Malyshev. The situation radically changed from June 26, 1953, when he headed the Ministry of Medium Engineering of the USSR (Minsredmash), which was in charge of all issues of the nuclear industry by that time. Therefore, it would not be an exaggeration to call Malyshev the first atomic minister. He held this position until February 28, 1955. But even after leaving the Ministry of Environment, he did a lot for the industry, being the chairman of the State Committee of the Council of Ministers of the USSR on new technology. Vyacheslav Aleksandrovich is associated with a brilliant leadership of large groups, which were epochal noted in three positions. Firstly, they created an implosive atomic bomb of the second generation for the strategic Tu-4 and Tu-16. Secondly, they presented the world with the first hydrogen bomb, and in the form that allowed it to be used as an argument of force. Thirdly, launched the process of formation of nuclear underwater fleet. A prominent figure in the Soviet military-industrial complex Lev Ryabev testified: “The initiative to develop the first nuclear submarine belongs to Malyshev. He wrote about this to Stalin, and he supported him. ”

Of course, atomic affairs, to which so much energy of the minister was directed, affected not only the interests of people in uniform. Malyshev knew Kurchatov’s expression: “Let the atom be a worker, not a soldier!” Although Vyacheslav Alexandrovich was different than Igor Vasilyevich, the alignment of accents, the first atomic minister did much for the application of nuclear energy in the civilian sector.

On the line of the highest executive authority, Malyshev oversaw the creation of a two-stage intercontinental ballistic missile P-7 with a range of up to 10 thousands of kilometers. He closely interacted with OKB-1, took an active part in the coordination of tactical and technical characteristics of the carrier of a thermonuclear charge.

For the integrity of the portrait of Malyshev, it is important to note that he was a member of the Central Committee of the Party for 18 for years, worked even longer as a deputy to the USSR Supreme Soviet. In these two qualities, Vyacheslav Aleksandrovich stayed from 1939 year to his death, which happened on 20 in February of 1957, that is, at the height of de-Stalinization.

December 16 marks 115 since the birth of the legendary minister. The hero of Socialist Labor, the holder of many orders and medals, twice the winner of the Stalin Prize, Colonel General of the tank engineering service Malyshev is a great example for the modern generation of defense workers.

Ctrl Enter
Noticed oshЫbku Highlight text and press. Ctrl + Enter
We are
America vs England. Part of 16. Crossroads of historyDiplomats of the People's Commissariat of Defense: on the eve and during the war
Military Reviewin Yandex News
Military Reviewin Google News
5 comments
Information
Dear reader, to leave comments on the publication, you must to register.