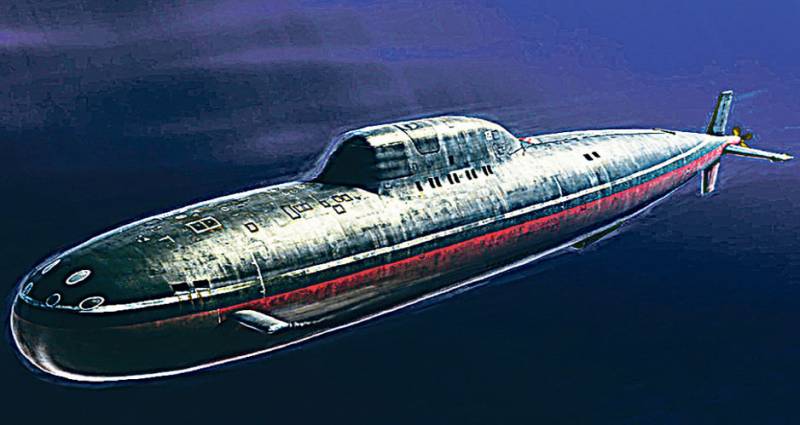 Ship-borne nuclear power plants with nuclear liquid coolant have a number of undeniable advantages. When creating submarines equipped with them, the designers proceeded from the fact that the liquid metal circulating in the primary circuit of the NPP with a high heat transfer coefficient provides the working “turbine” steam with parameters higher than those in the NPP with the classic water-cooled reactors (WWR).

The pioneers of refilling submarines with liquid metal were Americans. True, they had only one such boat built - SSN-575 Seawolf and the reactor on it was also installed one - type S2G. It was cooled with liquid sodium. The Seawolf, which entered the Naval Forces in 1957, was considered as an experimental alternative to the first US (and in the world) atomic SSN-571 Nautilus, which had a water-cooled reactor S2W. The Pentagon wanted to decide for the near future, which nuclear power unit for submarines is preferable.

Liquid metal perspectives seduced. When the pressure of the coolant in the primary circuit is 20 times lower than in a nuclear power plant with a BBP, the working steam temperature after the steam generator in the liquid metal NPU is higher in 1,8 – 1,9. However, the NPP itself from the Americans turned out to be quite complicated. In the second circuit between the tubes of the steam generator circulated an intermediate heat carrier - an alloy of sodium and potassium, heating the feed water, which evaporated in the steam generator. Sodium fiasco. An intense corrosion of the structural metal was observed against the background of growth in the last stresses, which were caused by a significant temperature drop in the reactor installation (250 degrees). And that is not all. In the event of an accident with rupture of the steam generator tubes, sodium and potassium would react violently with water, which would inevitably lead to a thermal explosion.

Despite the obvious thermophysical advantages of the S2G reactor, the American sailors were generally dissatisfied with them - the Seawolf nuclear power plant was less reliable than that of the Nautilus. In addition, large efforts have brought the need to constantly maintain the high temperature of the liquid metal while the boat is in the base, so that it does not freeze and “give the goat”, disabling the submarine

Therefore, the Americans exploited Seawolf c S2G not for long. Already in 1958, the boat has undergone a major renovation. The liquid-metal reactor installation was out of harm's place replaced by a more familiar and reliable one with the WWR S2WA - the type of reactor installed at Nautilus. With him, she served for many years.

In our country, the task of using liquid-metal NPUs on nuclear submarines began to be addressed almost simultaneously with the United States. This was envisaged by the resolution of the USSR Council of Ministers adopted in 1955. Work on the 645 project began shortly after the first Soviet nuclear submarine K-3 of the 627 "Kit" project (with VVR) was laid in Severodvinsk. The K-27 project was laid out there in the 645 project in the summer of 1958, when K-3 passed sea trials in the White Sea. Five years later, K-27 was accepted into the USSR Navy. The chief designers of the 645 project were Vladimir Peregudov and, from 1956, Alexander Nazarov (SKB-143, now Malakhit SPMBM).

In itself, the K-27 was an "energy" modification of the first Soviet nuclear submarines of the 627 and 627 projects. Externally from them and did not differ. The main innovation of the 645 project was that instead of the WWR VM-A, the “Whales” in fact experimental K-27 installed two BT-1 reactors with a liquid-metal coolant, which was used to combine lead and bismuth. The nuclear steam generating plant (NPPU) with BT-1 was developed by the design team of KB-10 (the future of OKB Gidropress) under the supervision of Academician Alexander Leipunsky. Produced YPPU at the Podolsk machine-building plant.

Officially assigned to the experienced ships, the K-27 was a full-fledged combat atomar. In April, 1964 went from the Kola Peninsula to the Atlantic march to the equator all the way underwater, which was the first time for our sub-melt. For 1240 hours, K-27 has left 12 400 miles astern. Record! The commander of K-27, captain of the 1 rank, Ivan Gulyaev, was awarded the title Hero of the Soviet Union for his success in mastering new technology.

Like the Americans, the Soviet sailors immediately faced with the difficulties of operation. This is the need for constant (that is, both at the berth and at the dock) to maintain the temperature of the primary circuit over 125 degrees, and its contamination with radioactive polonium-210 (the product of neutron bombardment of bismuth), and the need for special equipment to prepare fresh alloy lead-bismuth and the reception from the boat of such a spent "cocktail", and the glowing. In addition, K-27 was very noisy and therefore more visible than the atomarins of a potential enemy. This grieved the admirals the most.

In May, X-NUMX of the year K-1968, which had just undergone a scheduled repair, went to work out coursework tasks for combat training, and at the same time to test the operation of the power plant. Alas, the “childhood diseases” of the project made themselves felt, and that campaign for K-27 was not the “last resort”, but the last one. As soon as the boat reached full speed, the fuel elements in the left-side reactor overheated, some of them collapsed. The boat surfaced and returned to the base on the right reactor. Unfortunately, the accident had grave consequences: the fission products penetrated into the habitable compartments. The entire crew overexposed, eight sailors died in hospitals, another one choked on board in a gas mask. Experts have concluded that the most likely cause of the accident was the "poisoning" of the reactor core with slag and oxides of lead and bismuth. This was taken into account when creating new boat reactors with liquid metal coolant. K-27 itself did not recover, sent to the joke. In 27, it was flooded northeast of Novaya Zemlya in the Kara Sea.

The K-27 operating experience turned out to be dramatic, but not at all useless. From it, conclusions were made that formed the basis for the creation of new nuclear submarines with liquid metal (also lead-bismuth) reactors and a durable titanium vessel - one pre-production 705 project and six serial 705K (generic name "Lyra", according to the conventional NATO classification - Alfa).

We started development in the same SKB-143 under the supervision of Chief Designer Mikhail Rusanov. Built on the Novo-Admiralteisky plant in Leningrad, the K-64 was purely experienced and did not last long because of the accident with the cooling of the coolant. Serial atomic six (K-123, K-316, K-373, K-432, K-463 and K-493), built both in Leningrad and in Severodvinsk at Sevmashpredpriyatiya and replenished the fleet in 1977 – 1981 years, thanks to the excellent tactical and technical data brought a lot of headaches the US Navy.

And that is not all. "Liry" equipped with integrated systems of automated energy management and weapons. This made it possible to minimize the number of crew - it was three times less than that of other submarine nuclear submarines: 31 officers and one midshipman. An interesting point: the political commander was absent in the carriage, and the party-educational (that is, not the party-political party usual in the USSR Armed Forces) work was assigned to the commander. On the navy these boats are deservedly nicknamed "machine guns."

However, the widespread and further development of the boat project 705K (they were part of the 6-th division of the submarines of the Northern Fleet) did not receive. "Lyra" served until the beginning of 90-ies (head K-123 - before 1996-th), on the one hand - proving exceptional tactical articles, and on the other - revealing significant difficulties in operation, associated primarily with the need to maintain a certain level physical and chemical characteristics of the coolant, because the alloy of lead and bismuth had to be always in a liquid state.

Apart from the USSR (Russia), no one has such a long experience of using such reactors on submarines. Monopoly in the underwater nuclear (as, indeed, in the surface) shipbuilding keep water-cooled nuclear reactors.

Ctrl Enter
Noticed oshЫbku Highlight text and press. Ctrl + Enter
We are
USS Illinois Multi-Purpose Submarine (SSN-786): The New US Navy Its ProspectsA revolution called Nautilus
51 comment
Information
Dear reader, to leave comments on the publication, you must to register.