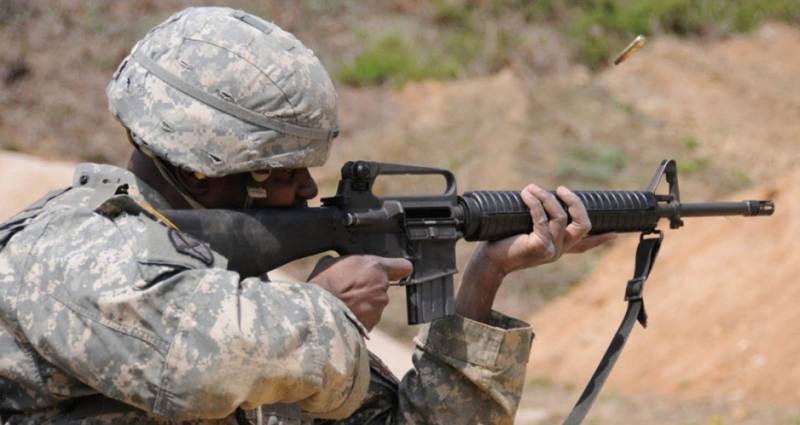 The usual reproaches to the M-4 assault carabiner (replacing the M-16 in the US military and a modification of this rifle) of insecurity have recently been added to claims of insufficient ammunition power, especially when working on a protected target.

The sad experience of Afghanistan and Iraq, the ghost of "Warrior"

So, a couple of years ago, the US Department of Defense presented a report stating that it was no longer possible to postpone the replacement of an assault rifle with a more advanced model. The document indicated that, according to the experience of the hostilities in Iraq and Afghanistan, although the M-4 is superior to the main weapon the enemy - AK-47 in accuracy, inferior to it in a number of other equally important characteristics, such as reliability and unpretentiousness.

US Army personnel regularly report weapons breakdown during sandstorms and urban debris, in dusty conditions. It is reported that the assembly, disassembly and cleaning of the M-4 in the field, or rather, in the sandy desert, is fraught with a weapon failure. In addition, it is said about the insufficient penetration ability of the cartridge used in the carbine. There are reports of episodes when the bullets could not penetrate even the sides of the truck at a time when the lines from the AK carry the walls of brick and foam blocks and hit the fighters who hid behind them.

As a matter of fact, the report does not contain any information about the weapons of the AR-15 line, putting, among other things, its age to the weapon (note that the AK, which, according to the authors of the report, is even older). To be fair, one can add that the problems of M-4 in Afghanistan are still somewhat less than those of M-16А3 during the “Desert Storm”. The report, based on the Afghan experience, was added to the realization that the carbine ammunition - cartridge caliber 5,56 x 45 millimeters is not effective enough against modern body armor - and above all against the protection used in the Russian Ratnik outfit.

Unreliability - the main trouble of the "Black Rifle" and its offspring

Based on this, the Pentagon has once again announced a competition for the replacement of individual weapons of the AR family. Recall that the assault rifle M-4 is a descendant of the AR-15 rifle, created by the outstanding American gunsmith Eugene Stoner in the early sixties of the last century. The debut of M-16 (Army Index AR-15) was the war in Vietnam. Since then, on the basis of this rifle, a whole line of combat and sporting weapons has been created, produced not only in the USA, but also in many other countries.

Despite the popularity of weapons based on the AR-15, which is second only to the Kalashnikov system, almost immediately after the adoption of the “black rifle” (the so-called Vietnamese veterans M-16), it found a lot of shortcomings reliability. Since then, M-16 has experienced several upgrades that, while significantly improving the characteristics of these weapons, have not yet been able to solve all of its problems. The question of replacing M-16 (and its versions - M-16А1, М -16А2, М-16АЗ and М-4) has already been raised more than once. So, in the 1991 year, the program "Perspective combat rifle" was curtailed, which is preparing to change the line of the AR-15, and has not been able to offer the American military anything worthy of attention. This fruitless job cost American taxpayers 58 million dollars.

The failure of the program gave rise to talk about misuse of funds and corruption. In any case, the Pentagon and the Department of Defense tried to do everything so that the Perspective Combat Rifle was forgotten as soon as possible. The program “Targeted Individual Military Weapons” was launched, which, by the beginning of 2000-s, was to provide American soldiers with not just a rifle, but a whole rifle-and-grenade launcher complex, which was to combine an automatic rifle for a standard NATO cartridge 5,56х45 and self-loading 20-mm grenade launcher. In addition, the shots of the new weapon should have had an “intelligent” fuse, which would ensure that the projectile exploded in the air. To determine the distance of the explosion, the complex had to have a laser range finder and a computer that automatically programmed the fuse. The weapon was equipped with various sighting devices, including thermo-optical, and it had to weigh only five kilograms. Actually the main part of this complex was to be a grenade launcher, and an automatic rifle - to serve as a weapon of self-defense of the operator at close range.

After reviewing the technical specifications of this revolutionary program, the famous American weapon expert Peter Kokalis said in 1996 year: “We will have to manage with existing rifles chambered for 5,56х45 for a long time.” And as the water looked. The M-4 carbines, which became an obvious peak of the evolution of the AR-15 line, both in terms of reliability and ergonomics, nevertheless marked a technological dead end. According to experts, the possibilities for further modernization of this system are almost exhausted. While the claims remained. And in 2010, a new program was announced, and “already” after six years, its favorites were identified.

There is a good assault rifle, alas - not American

So, in the old 5,56x45 NATO caliber, two options were considered. The first of them is the assault rifle of the German company Heckler & Koch HK-416. In many ways, it resembles the AR-15 scheme familiar to the Americans, but the Germans changed its most vulnerable spot - the gas outlet system - using a gas piston with a short stroke.

The result is a weapon with an M-16 accuracy, but with much greater reliability. Its samples are used with might and main in the special forces of NATO, in particular, in the armed forces of Germany and France, and also as a weapon of limited standard in the units of the US Special Operations Forces Command, and since 2010 of the year - in the US Marine Corps, under the designation M27 Infantry Automatic Rifle.

This weapon, successfully tested in combat, could be considered an ideal replacement for the M-4. It uses the same cartridge, the same shops. Its device is very similar to the usual "classics", which allows the use of many parts of the AR-15 group and does not require retraining of servicemen to work with new weapons.

But the rifle has one drawback, crossing out all its advantages - it is not American. Even released in the American factory, it still remains German. And it's not just a leaven, or rather, Coca-Cola patriotism. The fact is that the main US assault rifle will become a benchmark not only for NATO, but also for many other countries focused on the Western bloc. That is, the United States with its own hands will make the most powerful PR competing with them in the small arms market to the Germans. For this reason alone, the victory of this really good rifle (by the way, there is its version chambered for NATO 7,62x51 NK-417) in the American competition is unlikely. The other challenger (to which, by the way, the experts predicted victory, in the event that it was decided to stay with the former patron) was an American carbine Colt ACC-M. This is an improved version of a test rifle created back in 1990, which has no fundamental differences from M-4.

Another likely suggestion was the Barrett REC7 carbine with a short stroke gas piston. This weapon also uses a fairly powerful cartridge 6,8 × 43 mm Remington SPC. The main obstacle for him was that the introduction of a completely new cartridge as the main (unlimited standard) would force to change the entire weapons system of NATO. The same problem was present in another contest participant - Textron 6.5mm carbine, which uses specially designed bullets. Unlike conventional rifles, in which a bullet protrudes from the end of the sleeve, the innovative 6,5 mm cartridge is completely hidden in the sleeve and made using polymers.
Based on the fact that the mandatory requirement of the program was to use a more powerful patron than the 5,45 x 39 NATO (223 Rem), one could assume with a high degree of probability that the Robinson XCR-M karabiner would win under the 7,62 × 51 mm NATO (308 Win) cartridge, which has similar to AK gas exhaust device and has great reliability.

In favor of this model can be attributed to the fact that the cartridge used in it is much more powerful than NATO 5,56x45, unified for NATO machine guns and sniper rifles. This cartridge in 1954 was standardized as a single for the North Atlantic unit assault rifles. However, by the year 1961 Western gunsmiths came to the conclusion that this cartridge is not suitable for assault rifles. With the automatic shooting mode, he gave too much dissipation, and there was nothing to be done about it: neither the reduction in the initial speed of the bullet, nor the various schemes of the weapon and the muzzle devices helped.

As a result, the NATO rifle - M-14 and FN FAL and its versions - were converted into self-loading, depriving them of one of the main functions of the assault weapon - the automatic mode, which provides a high density of fire with sufficient accuracy.

That is, XCR-M assumed a return to the path that was once rejected by gunsmiths as erroneous. And so, suddenly, this fall, the US Department of Defense announced the early closure of the Interim Combat Service Rifle program. The reasons for which this decision was made, could not help but surprise. Speaking against the program, experts said that an increase in caliber would inevitably lead to an increase in the mass of weapons and ammunition, as well as a reduction in wearable ammunition. As if these things were not obvious from the beginning!
After all, at one time, the replacement of the M-14 caliber 7, 62х51 with the M-16 was due to the fact that the caliber of the new weapon allowed the soldier to increase the ammunition load by three times or reduce the weight of individual equipment by 40 in comparison with that of military personnel armed with M-14.

Replacing the M-4 does not seem to be a high priority.

Strictly speaking, the decision to stop the next program to replace the main assault rifle of the US Armed Forces is not surprising. After all, if we proceed from the tactics adhered to by the US ground forces and the marine corps, an assault rifle is not an essential tool for them. If we talk about special forces, they have the right to use weapons of "limited standard", which they do. That is, replacing the M-4, especially in light of the reduction in the US military presence in Afghanistan and Iraq, does not seem to be a top priority.

However, each such program promises a lot of money, not only in the form of kickbacks to military officials who make decisions about adoption, but also to numerous lobbyists. And the latter - almost officially. Perhaps this is the fanatical love of US military officials for everything new.