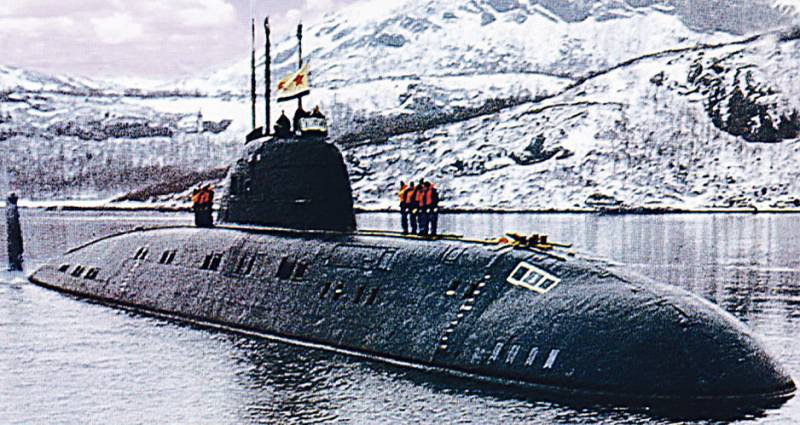 50 years ago the head nuclear submarines of three projects of different design bureaus - 671 developed by Malachite, 667 - Rubin and 670 - Lazurite simultaneously entered the USSR Navy. At one time, these submarines carried the main burden of nuclear deterrence and ensuring parity in all areas of the oceans. The last modifications of Rubin and Malachite ships are still in service.

The 50th anniversary of the atomic service of the 671th project was devoted to a scientific and technical conference organized by the family’s developer - SPBMB “Malachite” and one of the main building plants - Admiralty Shipyards. Nuclear submarines have significantly expanded the capabilities of our fleet. The lead K-3 of project 627 was put into service in 1958, and wishes, technical and functional, for the subsequent development of nuclear boats were immediately identified.

Among the tasks that were set before the creators of the second generation of multi-purpose submarines were the use of new, more durable low-magnetic steel, increasing the depth of immersion, switching to alternating current, the introduction of a new steam generator, the further development of automation and control systems. As Vladimir Dorofeev, General Director of SPMBM Malakhit, noted, there was an urgent need to create a new ship that would absorb all the best that was on the first-generation submarines, and at the same time provided a solution to the problems revealed during operation. The result was a cruising submarine of the 671 project, intended to fight the enemy’s nuclear submarines, counter ships deployed at the anti-submarine defense lines, and also to cover our convoys from enemy strikes.

Design work on the technical requirements of the Navy under the supervision of the First Institute of the Ministry of Defense was carried out by Malachite from 1959 under the supervision of the Chief, and subsequently General Designer Georgy Chernyshev. The success of the project was ensured by the joint fruitful work of the fleet, the Malachite design bureau and the Admiralty shipyards. Hero of Russia Vladimir Alexandrov, who headed the enterprise for more than a quarter of a century and came to the factory as a master just when the work on the nuclear-powered ship began, recalls: “If it were not for the 671 project, I don’t have a very clear idea of ​​the plant’s fate at that time. The shipyards at the beginning of the 60-s experienced some difficulties: the program associated with the release of diesel-electric submarines of the 615-project was folded, construction of heavy cruisers was stopped. And here the plant director Boris Khlopotov, a man with a certain folk sly, deeply aware of shipbuilding, played a huge role. He managed to create a group of specialists who prepared design documents for the construction of nuclear submarines. In the Central Committee of the Party and the government, the idea was understood, and in 1963, a resolution was issued on the development of the plant. From that moment, the modernization and development of the 12 workshop began, a number of sites, our design and technology office came to life, three thousand workers were recruited with housing. Of course, in the process of construction there were many difficulties and shortcomings in terms of the quality of performance, the reliability of individual systems and devices. To the credit of the factory workers, they listened to criticism and tried to solve these problems. I would like to note the special role of the 1 fleet of the Northern Fleet. Every year, together with the sailors, they held meetings where they considered the state of technology, success and failure. This allowed from order to order to achieve all the best results. I began to manage shipyards from 1984, and the seven submarines that were then built showed very high quality. The last of them was commissioned in 1992. ”

The 671 nuclear submarines of the project turned out very successful: reliable, subtle, high-speed, calmly sank to 400 meters, had a speed of more than 30 nodes and more than two months could be in independent voyage.

Vladimir Dorofeev drew attention to the unthinkable work intensity now: “The ship’s technical design was defended in 1960, the documentation was transferred to the plant in 1962, the lead ship was accepted into the Navy in 1967. That is, only six years passed from the completion of the technical project to the raising of the naval flag. From the point of view of our present reality, the terms are fantastic. Yes, the ships have become more, but the terms of creation have grown disproportionately. "

High tactical and technical characteristics of 671 submarines of the project were obtained as a result of a successful combination of new technical solutions. This is a symmetrical form of the body with optimal propulsive qualities, cruciform plumage, where large horizontal rudders were complemented by small ones designed to control at high speeds, the “right” nose tip with proper location of torpedo tubes and large-sized antenna hydroacoustics. A single power plant with two water reactors provided increased reliability. The block layout of the steam turbine installation improved vibro-acoustic characteristics and simplified installation. Of the innovations introduced, it is worth mentioning the use of new high-strength cabinet steel, the use of three-phase alternating current in power systems, the widespread introduction of remote control of actuators.

A huge contribution to the creation of the project was made by the developers of the component equipment: OKBM named after I. I. Afrikantov, where they created the nuclear power plant, the special design bureau of the Kirov plant, which created the steam turbine installation, the specialists of the central research institute named after A. Krylov, the central research institute CM "Prometheus", "Aurora", " Granita ”,“ Elektrona ”,“ Gidropribor ”,“ Novator ”,“ Oceanpribor ”and dozens of other groups that invented and manufactured the ship systems that were advanced in those times. As the conference participants put it, in the course of joint creative work on the 671 project, a school for the construction of multi-purpose submarines arose.

In 1967, the head K-38 (factory order number 600) was accepted into the Northern Fleet. The first commander of the ship was the captain of 2 rank Eugene Chernov, the future Vice-Admiral, Hero of the Soviet Union.

At the anniversary conference of the creators of the 671-th project came ten sailors from the first crew of the submarine, who remembered a lot of interesting episodes of the birth of the ship. How they worked in three shifts, seven days a week, how they drove a finished boat in a floating dock across divorced Neva bridges, how they overdid it with trials and had to emerge in emergency mode, like in a local submarine, over 300 people lived and worked at sea at sea. But especially interesting then know-how.

Already on the submarines of the second generation, it was decided to move from separate hydroacoustic stations to complexes. Moreover, the new system turned out to be so sensitive in terms of the target detection range, which was several times higher than the parameters of the technical specifications. And since the adjustment of TZ is very lengthy and troublesome, they went to the trick, replacing the unit of measurement with sea cable for land kilometers. The transition from DC to AC allowed to reduce the dimensions of the on-board electrical equipment and increase its reliability. For the first time, a ship control system was introduced, on which 250 ship complexes, assemblies and mechanisms with half a thousand information sources were tied. The algorithm then developed is still used on submarines. Step by step, the armament of the submarine from torpedoes to PLUR and cruise missiles was improved.

In total, over a quarter of a century, 48 submarines of the 671 project were built in Leningrad and Komsomolsk-on-Amur. Moreover, due to accidents not a single ship was lost, not a single sailor was killed.

As the 671 project developed under the code name “Ruff”, modifications appeared: the 671В was equipped with the Vyuga missile-torpedo complex, the 671K was equipped with the C-10 Granat missile system (SS-N-21). The 671PT "Salmon" is equipped with a diesel generator of increased power, and two 533-mm torpedo tubes are replaced with more powerful 650-mm. On the Schuka 671RTM, one seven-blade screw was replaced by two four-blades, which reduced the noise, modernized electronic armament. 671RTMK, in addition, is armed with the KR "Granat".

According to Western experts, the 671 project, especially its latest modifications, was distinguished by a relatively low level of external noise, and in terms of this indicator were close to American submarines of the Los Angeles type. Suffice it to recall how our sworn friends were alarmed when 29 February 1996 of the year during the NATO fleet exercises in the middle of their ship warrant our NPS K-448 “Tambov” project 671RTMK surfaced, which they had not seen before, and asked for medical assistance alone from seamen, this required an urgent operation due to the threat of peritonitis. The submariner was taken to the British destroyer "Glasgow", and from there by helicopter to the hospital. Thanking colleagues, our boat plunged and again disappeared from the sight of NATO locators. After that, the Western press wrote about the super-hiding of our submarines for a long time.

For the creation of the first series of ships 671-th project in 1970, the chief designer George Chernyshev was awarded the title Hero of Socialist Labor, a large group of specialists awarded orders and medals.

Now, the Navy has three submarines 671RTMK, although the main load of the multi-purpose nuclear-powered submarines is carried by the Malachite submarines of the third-generation 971 project. The combat crew is also supplemented by the fourth-generation universal submarine cruisers of the 885-project “Ash”, also developed in SPMBM. The head cruiser Severodvinsk already serves in the North, the Kazan is launched. At Sevmash in varying degrees of readiness "Novosibirsk", "Krasnoyarsk", "Arkhangelsk", "Perm", "Ulyanovsk" - up to 2020, it is planned to hand over six "Ash trees".

The Malachitians, meanwhile, are already working hard on the fifth-generation Husky submarines. And as Vladimir Dorofeev noted, the design bureau is tasked with reducing the complexity of building a ship while unconditionally achieving technical characteristics. After all, “Malachite” always creates ships not only competitive, but superior foreign analogues. This is a Soviet school. When designing the submarines of the future, at the new technical level, solutions are implemented that were tested on the first multi-purpose submarine of the 671 project.