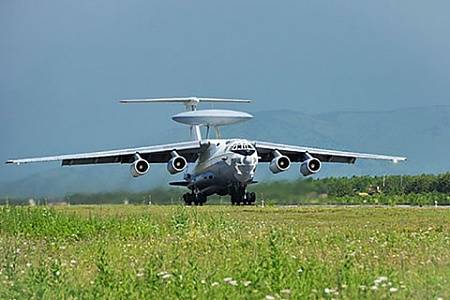 The operation in Syria, carried out by the Armed Forces of the Russian Federation at the request of the Syrian government, allows a number of conclusions to be drawn. One of them concerns the further development of domestic long-range radar detection and control aircraft (AWACS). Yes, the A-50U aircraft currently in service and the latest A-100 undergoing testing largely set the bar for such aviation complexes in the world, but they are few. So, during the operation in Syria at the Khmeimim airbase, only single A-50Us were deployed, which, of course, could not provide round-the-clock air duty over the combat area. Therefore, for our Armed Forces, the task of creating a relatively inexpensive operational-tactical AWACS system is now more urgent than ever. And here the experience of China can help us.

In the 90 of the last century, Beijing headed for a radical modernization of its Armed Forces. The growing economy and the increasing role of the country in world politics demanded new qualitative approaches in military construction. One of the areas of modernization of the People’s Liberation Army of China (PLA) was the creation and adoption of DRLOiU aviation complexes.

The result of the work deployed in this direction turned out to be more than impressive - the Chinese aviation and radio-electronic industry managed to create a whole family of airplanes of various types. As a result, the Celestial Empire was among the countries capable of independently creating modern aviation complexes AWCS, comparable with American, Russian and European counterparts.

KJ-2000, equipped with RTK with high-power radar, was the first in this line, both in terms of time of entry into service, and in terms of RTK capabilities and value. The basis for its creation on the IL-76 platform was the AEW complex "AI" developed and built in 1997 – 2000 years, according to the contract concluded between Russia, Israel and the People’s Republic of China (A-50I). The complex was developed by the Israeli company Elta multifunctional pulse-Doppler radar EL / M-205. It consists of three active phased antenna arrays (AFAR), forming a triangle and located above the fuselage in a fixed mushroom fairing with a diameter of 11,5 m (more than the E-3 and A-50).

Despite the fact that under US pressure, Israel withdrew from the program, the PRC leadership decided to continue work on the program independently, equipping the AI ​​plane it received with the AFAR radio engineering complex, as well as means of communication and transmission of nationally developed data. During the 2005 – 2007, the PLA Air Force delivered four serial KJ-2000s that were re-equipped with the Il-76MD transport vehicles in China.

In parallel with the creation of KJ-2000 in the PRC, at the end of 90-s, a program was launched to create another DRLOI complex - with more modest capabilities based on the airframe of the Y-8 transport aircraft (the Chinese An-12 clone) equipped with RTK radar AFAR. Two flat cloths AFAR in a fixed rectangular fairing were mounted on the fuselage in the image and likeness of the Swedish plane DRLOiU Saab-340 AEW "Argus".

It was assumed that the operational-tactical complex KJ-200 would complement the more expensive and complex KJ-2000, thereby ensuring combat stability and more flexible use of PLA and PLA aircraft.

The first prototype, made on the basis of an experienced Y-8F-200 transport and equipped with a full-sized antenna system, but not yet fully equipped with RTK equipment, took to the air 8 November 2001 of the year. The first serial KJ-200 was released in the 2004 year. In total, judging by the available data, 11 KJ-200 was released. All of them were included in the 76-th aviation regiment of the DRLO aircraft of the 26-th aviation division of the PLA Air Force's special mission, where they are operated jointly with their “older brothers” KJ-2000.

At the same time, the KJ-200 systems in service are being upgraded. At the end of 2016, photos of the new KJ-200 modification were published (in some sources it is designated as KJ-200A). Its main external difference is the new large radio transparent fairing in the nose (like KJ-500), obviously designed to improve the radar visibility of the RTK in the forward hemisphere. It is possible that all those used in the KJ-200 combat units will be upgraded to the KJ-200A standard.

On the basis of the KJ-200 aircraft, the Chinese specialists, in accordance with the requirements of the Pakistani Air Force, developed an export version, designated ZDK-03. This modification is based on the airframe of a military transport aircraft Y-9. The main apparent difference between the ZDK-03 and the KJ-200 is the placement of the RTK antenna system in a “classic” rotating disc fairing above the fuselage. The first aircraft of this type was solemnly handed over to the Pakistan Air Force 13 on November 2010, after which it began intensive tests with the Pakistani crew. In total, the Pakistani Air Force received four such vehicles in the 2011 – 2015 years.

The development of aircraft complexes KJ-200 and ZDK-03 was the aircraft AWACS KJ-500. It is created on the platform of a transport aircraft Y-9. Apparently, comprehensive testing and operating experience of DRLOI complexes with various types of antennas led Chinese specialists to abandon the Swedish-Brazilian option of placing two flat AFARs in a fixed fairing above the fuselage (as on KJ-200). Therefore, KJ-500 looks similar to the Pakistani ZDK-03, but an important feature of the new complex is that the radio transparent radome, the “plate”, is stationary (it is rotating on the ZDK-03), which form a triangle for provide a circular view. Additional antenna systems are located in the fairings in the nose of the fuselage and tail section, as well as along its sides.

Probably, the onboard equipment KJ-500 is a kind of “symbiosis” of the systems used on the KJ-200 and KJ-2000, and according to the capabilities of the avionics complex, the new aircraft is intermediate between its “older” and “younger” brothers.

The first production aircraft KJ-500 taken into combat personnel of the PLA Air Force at the end of 2014-th - the beginning of 2015 year. It is known that two cars entered the air regiment of special mission aircraft of the Airborne Division, in which KJ-2000 and KJ-200 serve. Two more KJ-500 joined the naval aviation.

Apparently, both types of operational-tactical complexes DRLOUU KJ-200 and KJ-500 will be operated in China in parallel. In the future, the KJ-500 will probably become the main complex of the Airborne Command and Control Division of the Air Force PLA of a similar class.

Taking into account the fact that an ambitious program of building full-fledged aircraft carriers is being implemented in the Celestial Empire, the PLA Navy demanded a deck-based Airliner aircraft. The development program of the Chinese counterpart of the American "Hokaya" was allegedly launched in 2005 year. The official recognition of the existence of such a program was made only in January 2012 of the year, and in the summer of the same year, photographs of the JZY-01 AMERICAN pilot aircraft became available. This machine, created on the basis of the transport Y-7 (“clone” of An-26), is intended for working off the RTK and constructive solutions.

At the beginning of 2017, not very high-quality photos of a full-scale mockup of a prospective carrier-based AWACS aircraft, designated KJ-600 and intended to be based on promising Chinese aircraft carriers of the 002 project equipped with catapults, became available. Chinese experts did not begin to reinvent the wheel, as they chose to follow the classics of the genre - the American carrier-based deer aircraft E-2C. Judging by the photos available, the radome radome also radically resembles the American counterpart.

However, according to some experts, it is made not rotating, but motionless, and inside it (as in KJ-2000 and KJ-500) three AFARs are placed in a triangle, thereby providing a circular view.

There is information about the creation in China of a promising DRLOI aircraft based on the new Chinese heavy transport aircraft Y-20. It was announced and its designation - KJ-3000. Compared to the KJ-2000, the new RTK installed on board, which will implement the latest achievements of the Chinese electronics industry, should ensure a greater detection range and the number of air targets to be accompanied.

In the long term, the role of an airborne platform for the DRLOIU complex is being tried on for the promising Chinese medium-haul passenger airliner С919 and the joint Russian-Chinese wide-body long-haul ShFDMS aircraft (CR929).

Thus, the PRC confidently demonstrates the achieved success of its own research and production base and technologies necessary to create various types of AEW aircraft. In addition, it is an unequivocal application for the entry of Chinese DRLOI aircraft into the international market, where they are fully capable of competing with American, European and Israeli counterparts, primarily for financial, economic and political reasons.

It should be noted that in China, at the same time as the creation of heavy and expensive aviation complexes based on the Il-76MD and Y-20, emphasis is placed on the construction of relatively cost-effective "medium" DRLOA aircraft. At the same time, operational tactical KJ-200 and KJ-500, if necessary, are able to perform strategic tasks. And what is important, to build such complexes at comparable costs can be much more.

The experience of the PLA Air Force, having a whole range of DRLOIU complexes of various classes, should serve as an example for the Russian HQs, since the issue of creating a domestic DRLOiU aviation complex, similar to the designation of KJ-200 and KJ-500, has not just matured, but already, overheated. Such planes are necessary for our VKS "just yesterday."