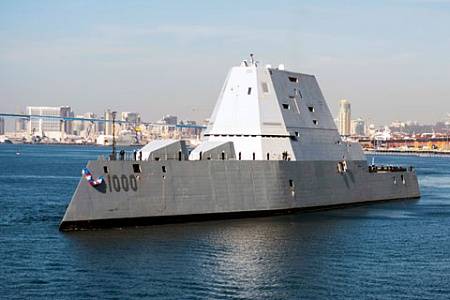 At the beginning of last week, 4 December 2017, the Americans, as usual, with fanfare and bravura speeches, conducted on the factory test trials destroyer URO "Michael Montur", the second ship of the type "Zumvolt". However, the very next day, this superfighter, resembling a giant iron and named after the "fur seal" Michael Anthony Monsur, who died in Iraq in 2006, was urgently forced back to the factory.


The fact is that when trying to give full speed in the main power plant of the ship, breakdowns occurred, the nature of which is not yet entirely clear. The developer claims that the reason is a malfunction of the induction coil, which, in turn, led to the failure of another system. Be that as it may, they decided to fix the breakdown at the shipyard, and not at sea. It’s good that the destroyer returned back under its own power. When it will be able to re-enter the sea to continue the factory sea trials, it is not clear, although representatives of the US Navy claim that the repair will not affect the plans to hand over the ship the fleet in March 2018 of the year.

Earlier, we recall, serious problems with the main power plant also arose in the lead ship in the series - the destroyer of the URO “Zumvolt”, which was accepted into the fleet of the 15 fleet in October 2016. At first, during his testing, the outboard water flooded the oil system of the main drive, after which the ship had to replace all four oil coolers, and a month after entering the US Navy, 21 November 2016, during the forcing of the Panama Canal during the transition from the Atlantic to the Pacific, his left propeller “rose”, after which the outboard water penetrated two of the four bearings of the propeller shaft and eventually the second propeller failed. The huge warship completely lost speed and hit the canal wall. The local old-timers could not recall such a spectacle.

The supersweeper was forced to be dragged through the Panama Canal with the help of tugboats, and then the ship was repaired at the Vasco Nunez de Balboa naval base located in the Canal Zone, which belongs to the National Air and Marine Service of the Ministry of Public Security of Panama. And only then “Zumvolt” returned to his native San Diego under its own power. It turned out that the water again, as before, got through the oil system, but the Americans were not able to find out the reason for this.

Even the fact that the first commander of Zumvolt became captain James Kirk - the namesake of cinema James Kirk, commander of the famous spaceship Enterprise, from the Star Trek saga did not help the head ship of the future. This is what it means to launch without observing all naval traditions, including breaking a bottle of champagne.

Currently, the Bath Iron Works is building the third and last ship of the Zumwolt type, named Lyndon B. Johnson. And initially a series of 32 ships was planned for construction, however, as the cost of creating a new type of ships and their construction increased, it was significant, and also taking into account quite a significant change in the vision of the US Navy command for waging war at sea in the foreseeable future, the number the ships required for the fleet were first reduced to 24, then to 7, and finally to 3 units.

In addition, these superemployers were deprived of one of the main strike weapons - ship artillery: the railgun was recently decided to stop developing, and the use of 155-mm guns for firing the latest high-precision projectile type LRLAP (Long Range Land Attack Projectile) was questionable due to the excessive cost of the latter - under a million dollars per shell! In November 2016, representatives of the US Navy were in favor of stopping work on the LRLAP program due to the rapid growth of its budget. American sailors even began to seriously study the idea of ​​developing for liners for 155-mm guns, which ensure the firing of 127-mm naval artillery shells in abundance. But in this case, there can be no question of the firing range in 100 km and more, which the 155-mm guns were supposed to provide.

As a result, it becomes completely incomprehensible what tasks these giant destroyers, who will have to strike weapons now there are only missiles (initially these ships — a distant echo of the “ship-arsenal” concept) —were to predominantly strike the coastal targets and detachments of enemy warships, as well as solve the air defense tasks of the formation and, to a limited extent, combat enemy submarines). But if Zumvolt can take on board the Tomahawk 80 cruise missiles (if you do not take other missiles), then the more numerous, significantly cheaper and Orly Burk URO destroyers of the last modification - 96 "tomahawks." However, Zumvolt can place anti-aircraft guided missiles in its launchers up to 320, but an anti-aircraft missile for 4 billion dollars, and only three copies, is too much even for the huge US military budget. What is interesting, initially it was about launchers not with 80, but with 128 cells, but, as always, something went wrong ...

Given all the above, it is not surprising that today the main enemies of ZUMVOL-class destroyers are not across the ocean, but in Washington: many representatives of the legislative and executive branches are shocked by such a “miracle weapon”.

“The Zumvolt type destroyer of the DDG-1000 project is a good example of how the program ultimately goes beyond the originally approved budget, implementation dates and declared characteristics,” emphasizes Senator John McCain. “The cost of DDG-1000 has grown so much that, instead of 32, we can afford to buy only three ships.”

And here you can't argue with Senator McCain. In addition, several years ago, information was leaked to the press that secret military intelligence reports in 15 indicated that giant destroyers were seriously vulnerable to new high-precision missiles produced in countries attributed by the Pentagon to America’s potential or existing enemies. Simply put, in the event of a war on "zumvolty" it will be possible to easily sell tickets "one way".

Ctrl Enter
Noticed oshЫbku Highlight text and press. Ctrl + Enter
We are
What you didn't want to know about EnglandList of destroyed the largest and most high-tech enterprises
26 comments
Information
Dear reader, to leave comments on the publication, you must to register.