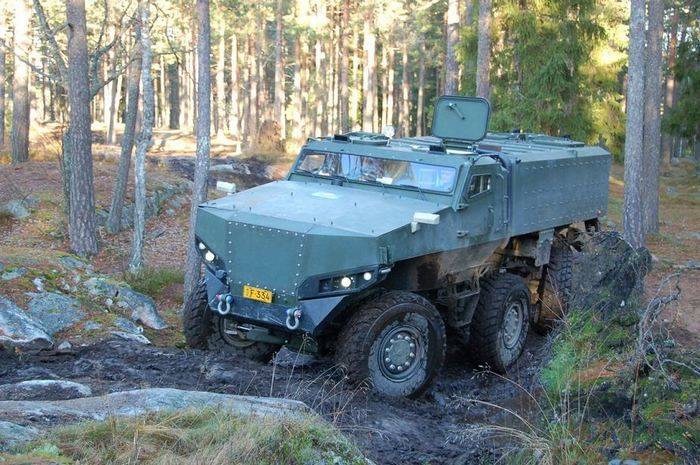 According to the press service of the Finnish military department, 4 prototype armored vehicles will be purchased for the army. During 2018 - 2020 PMPV 6 × 6 MiSu will be tested, after which the Defense Ministry will decide whether to take on new armored personnel carriers. The cost of purchasing an experimental batch was about € 4 million.

PMPV 6 × 6 MiSu - vehicle type MRAP (mine resistant ambush protected - protected from undermining and ambush attacks). In addition to high off-road performance, MiSu is able to overcome water obstacles. The speed of the 14-ton armored car can reach 110 km / h by land, and by water - 12 km / h.

The development of the PMPV 6 × 6 MiSu amphibious armored vehicle is conducted by Protolab from 2009 of the year. In 2015, the manufacturer showed the first prototype of the machine and conducted the initial stage of its testing. A Finnish amphibious armored car can carry up to 12 people, including two crew members, or up to 10 tons of cargo. PMPV 6 × 6 MiSu can be equipped with a remotely controlled combat module with various types of weapons, reports "Warspot"

Ctrl Enter
Noticed oshЫbku Highlight text and press. Ctrl + Enter
We are
Knights of logistics in shining armor. The experience of Iraq, Afghanistan and not onlyWhat light armored vehicles will be in demand in the future?
Military Reviewin Yandex News
Military Reviewin Google News
16 comments
Information
Dear reader, to leave comments on the publication, you must to register.