What "felt" the APU during the beginning of the withdrawal of troops from Syria? The boiling up of the situation in the Donbass has received an interesting parallel 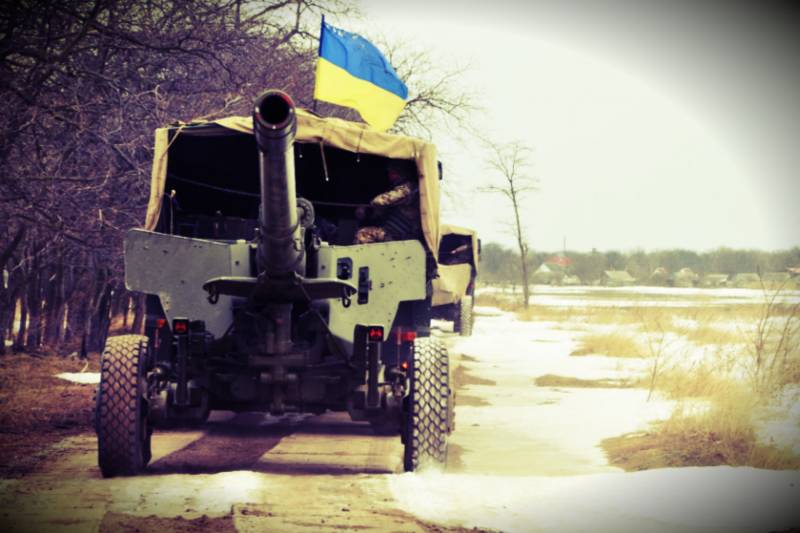 Immediately, two of the most important military-political events took place in recent days in the Near-Asian region. And each of them has become for the Western coalition, as well as Israel, a kind of “warning shot” indicating the unacceptability of continuing the former aggressive and frankly hegemonic military-political vector in the Middle East. The first can be attributed to Vladimir Putin's decision, command VKS Russia and the General Staff of the Armed Forces of the partial withdrawal of Russian troops from the Syrian theater, which consisted of: 25 aircrafts (2 attack helicopter Ka-52, 6 links tactical fighter-bombers Su-30SM , Su-34, Su-35S and VKS mixed-wing air bomber), demining center unit (including Typhoon armored vehicles, BTR-82AM and Uran-6 robotic complexes), SPN unit, military police unit and about field hospital. The order was given by V. Putin during his arrival at Khmeymim airbase on Monday, December 11, 2017.

Nothing surprising, at first glance, in the withdrawal of most of the military units of the Russian Armed Forces (except for the C-400 anti-aircraft missile regiment in Hammeim and C-300В4 batteries in Tartus) from the ATS. After all, the opponents represented by the territorial groups of ISIL are almost completely defeated, or are in several tactical boilers on the west bank of the Euphrates (150 is the kilometer boiler between the provinces of Homs and Deir ez-Zor and 35 kilometer north of Abu Kemal), and also 2- x boilers in the territory controlled by the SDF (including the 171 kilometer boiler along the eastern border of the SAR and the boiler adjacent to Abu Kemal on the eastern side of the Euphrates bed). The existing capacity of the Syrian Arab Army is sufficient to clear the enclaves on the eastern bank of the Euphrates.

But there is a very revealing geopolitical "trick" in this "leaving" from Syria, called to put Washington on an honestly deserved place in the "Middle Eastern intricacies." By diverting the operational grouping of troops (including military advisers and specialists) from the line of contact between the CAA and the Syrian Democratic Forces, passing along the Euphrates, Moscow leaves the pro-American Kurdish units (YPG / YPJ) alone with such formidable opponents as by the number of armed forces of Turkey, CAA, the Iraqi army, the Islamic Revolutionary Guard Corps, etc. Naturally, it will be much more difficult for Americans to settle the situation in their favor (without Russian participation), especially against the backdrop of Washington’s removal from the peace process in the Middle East during a meeting of the Organization of Islamic Cooperation (OIC). High-ranking representatives of the Arab states significantly limited the participation of Americans in the “Great Asian Front Division”.

All points related to the opposition of the Arab world to the decision of Donald Trump on Jerusalem can be easily found in the statements made by high-ranking officials at the OIC December 13 meeting, and therefore again there is absolutely no point in reviewing and analyzing them.

A much more interesting analytical chain can be constructed by drawing parallels between the withdrawal of a part of the Russian contingent from Syria and the suddenly aggravated operational and tactical situation in the Donbas theater of operations. Late in the evening, December 11 2017, literally a few hours after Vladimir Putin ordered the withdrawal of troops from the SAR, the Western and Northern Fronts of the Donetsk People's Republic, “as if by magic, exploded” from a sudden massive artillery attack from several batteries at once barrel artillery APU. Under the shelling were n.p. Dokuchaevsk, Gorlovka, Zaitsevo, Logvinovo, the neighborhood of Uglegorsk, the whole Svetlodar bridgehead and many more villages. According to the mayor of Gorlovka, Ivan Prikhodko, closer to midnight, the 3 boiler rooms (No. 29, 69 and 70) were de-energized immediately by enemy fire, direct hit was also recorded at the house at ul. 28 fishing. Dozens of apartments and houses remained without heating. The next day, the Ukrainian artillery worked mainly in Dokuchaevsk, as a result of which 29 houses were damaged on ul. Furmanov, Frunze, Central, Komsomolskaya, Gorky, etc. Ukrainian self-propelled and towed artillery mounts Msta-B, Hyacinth-B, D-30, Acacia and Gvozdika worked from previously known positions near Novotroitsk, Olginka, Novomikhailovka (dokuchaevskoye ON); as well as under Panteleimonovka, Kurdyumovka, Svetlodarskoye (Debaltsevskoe and Gorlovskoye IT), as a result of which some of the batteries of the aggressor were quickly destroyed by the artillery divisions of the DPR DND anti-battery artillery battery.

Even to an amateur here it is extremely clear that this is not a mere coincidence, but a pattern of pure water. The level of interrelation between the completion of the decisive part of the confrontation of the Russian contingent with the IS and the activation of the Ukrainian military formations in the Donbas is extremely high. This massive blow to the frontline settlements of the DPR is nothing more than provocative “probing” of Moscow for readiness to participate in active hostilities against the background of a partial shift of the “focus” of interests from Damascus towards Donbass. “Feeling” this was done solely by the command “face” from the Pentagon. The desired result, except for counter-battery fire, neither Kiev nor Washington could not achieve. What was Washington waiting for? Naturally, more aggressive and decisive actions by the DPR People’s Militia Corps (local offensive, the liberation of settlements in the "gray zone", etc.), which could be implemented solely by a trick from Washington. Logically, this would be a clear signal to the Trump hawks in favor of forcing the White House’s head to sign the 47 million-dollar military aid package (including lethal weapon), which was sent to the US National Security Council for consideration by Congress back in October-November 2017; but the "focus" is not rolling!

As a result, the West temporarily found another loophole for official deliveries of the “Square” lethal weapon, bypassing the Trump administration. Canada has agreed to act as the main supplier of lethal weapons. The bill was ratified by 13 December 2017 of the year. For the ears and eyes of ordinary citizens, the document provides for the possible transfer to the Ukrainian side of automatic small arms, hand-held anti-tank weapons and "other types of devices" that are in service with the Canadian army. The process will be carried out through intra-bloc military-technical cooperation between member countries of the North Atlantic Alliance and some friendly states with NATO. Having a little brains, one can figure out that from this moment Ottawa becomes an ordinary mediator for sending Ukrainian militants of various types of weapons, including, for example, the American Javelin anti-tank systems (disease of Ukrainian bloggers and some parliamentarians), TOW anti-tank systems, or various adjustable precision projectiles for 155-mm ACS, which can be obtained from Poland (based on AS-90 / Krab ACS towers) and from the USA (M-109 Paladin of various variants).

But in the official news summaries, this information will begin to appear only after the military men discovered the facts of the presence of new weapons in the Donbass. This way of pumping the Armed Forces of Ukraine with weapons to continue the escalation of the conflict in Donbass is extremely convenient for the United States. In fact, there is no formal legislative approval of the transfer of lethal weapons by the White House, which allows the Trump administration not to officially violate the commitment to the "Minsk agreements" and the "Normandy format" voiced by Kurt Volcker and Trump himself. Canada will act as a scapegoat here, which absolutely does not care about our reaction; moreover, Ottawa is not tied to various "Minsk" and other "filkin letters" developed with the assistance of the European "litters" of the United States. In fact, Canada can be considered another unincorporated organized territory of the United States, but with a different sovereignty and modified legislation, and therefore an excellent tool for the White House to implement various penumbral schemes of military support for disadvantaged pro-Western regimes in Eastern Europe and Central Asia without its own direct participation. Obviously, falling into the hands of the Kiev junta of Canadian and American lethal weapons will aggravate the situation in Donbass, forcing the military leadership of the republics to act more decisively and promptly than in the situation with the villages of Gladosovo and Travnevoe. And all this can develop into a full-fledged round of escalation by the beginning of 2018 or the beginning of the presidential campaign in March 2018.

As for the recent statement by the Deputy Commander of the DPR Operational Command, Eduard Basurin, regarding a possible offensive attack on the Gorlovka operational direction with a likely capture of Zaitsevo and Gorlovka, made on the basis of information on the concentration of armored formations of the Armed Forces of Ukraine, several Grad RSZ batteries, and also artillery guns in the villages on the line "Artemovsk - Konstantinovka - Svetlodarsk", then if such a probability exists, its percentage is extremely small, since it is to attack in the frontal area the second most powerful fortified HM DNI - Gorlovka-Enakievo agglomeration APU will not be solved even with shtatovskih support. Present in this area of ​​anti-tank units already today is enough to wipe out most of the Ukrainian armored units, including reserves. The thin “Telmanovsky Isthmus” continues to remain in the risk zone, the northern borders of which are precisely formed by the Dokuchaev direction, which is today the most active part of the work of Ukrainian artillery.