Pentagon voices: nuclear war will take place in 2026, Russians will untie it

December 18 2017
47
According to knowledgeable American sources, the Russians plan to increase the number of low-powered nuclear weapons by the year around 2026, which are suitable for use in local conflicts. Experts' conclusion: for the sake of war, Moscow is expanding its arsenal of tactical nuclear weapons. 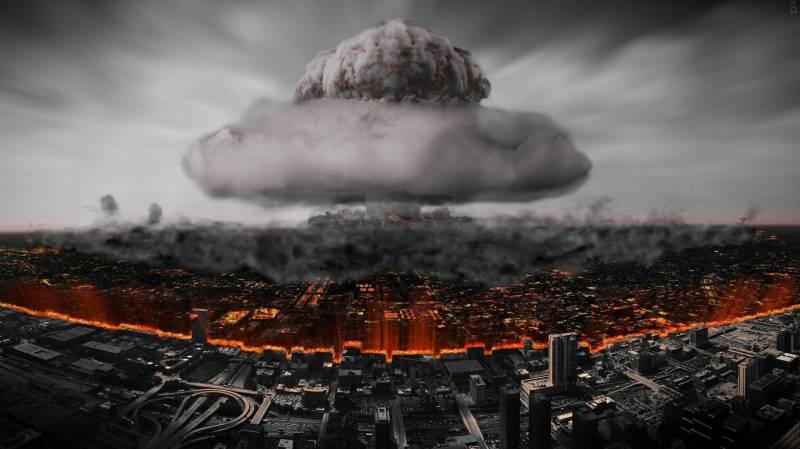 On the local nuclear war, which threatens the world with Moscow, told sources of the publication The Washington Free Beacon. These sources come from the Pentagon. These Russian military experts attributed the nuclear ammunition of the Russians to the latest generation. New charges will receive high-precision cruise missiles. However, the Russians will not stop at this: they will equip even the satellites with the latest generation of charges. Trembling, Earth!

Referring to the original material.

In the online edition "The Washington Free Beacon" published an article signed by well-known in wide and narrow circles Bill Hertz (Bill Gertz).

Russia is rapidly "expanding the nuclear arsenal" and "modernizing underground facilities." This is claimed by representatives of the Pentagon.

Russia "is actively building up its nuclear forces, and by the 2026 year, according to Pentagon representatives, 8.000 warheads will be deployed as a whole, and deep underground bunkers will be upgraded," he writes.

The 8.000 warheads mentioned will include "both large strategic warheads and thousands of new low-power and very low-power charges." Low power will be given to these "charges" for the sake of circumventing arms contracts.

Moscow implements the new doctrine, which allows Russians to use nuclear weapons "at the beginning of any conflict," the journalist Hertz comments on the statements of the people of the Pentagon.

In addition to expanding the number of warheads, Russia also "strengthens the underground facilities," where the command is located and where it controls "over the course of a nuclear conflict."

One of the “officials” told the journalist that the “alarming expansion” of the Russians indicates that Russia is preparing to get out of the current restrictions on nuclear weapons, that is, of those that are currently operating under the arms treaties: the START-2010 treaty and 1987 of the Intermediate Nuclear Weapons Year, which Russia has already “violated” by testing a ground-launched cruise missile (ground-launched).

An assessment of Russia's military activities also suggests that in future conflicts, Moscow plans to combine its traditional forces with nuclear forces, which "complicates the use of American nuclear weapons as a deterrent."

The new information on arms buildup in Russia is being studied by the Pentagon in the framework of the detailed “Nuclear Policy Review”. The findings are expected to be published at a time when President Trump will make a statement before the US Congress in January 2018.

Bill Hertz recalls in this connection that last summer Donald Trump called for the building up and modernization of the US nuclear arsenal.

The previous president, Barack Obama, adhered to the opposite policy: in 2010, the corresponding Review called for reducing the role of nuclear weapons and the size of the nuclear arsenal.

The Obama administration, Hertz believes, based its strategic nuclear deterrence and the policy of warfare "on an outdated assumption of a sharp reduction in the prospects for military confrontation between the United States and Russia." However, “since 2010, Russia, China and North Korea have steadily increased their strength with the help of new nuclear weapons and delivery systems; besides, Iran is still a rogue state, which, according to many experts, ultimately decides to create a nuclear arsenal - this will happen in the next decade or earlier, when the restrictions stipulated by the international nuclear deal expire. ”

The new "Review" The Pentagon is partly building on the rejection of outdated estimates of the "Obama era," the author writes. After all, Russian nuclear forces (new warheads, missiles, bombers, submarines) "are increasing sharply." And this nuclear modernization is something ominous, since Moscow adopted a new strategic doctrine that allows the use of nuclear weapons "in the course of any ordinary conflict."

The journalist is particularly concerned about the new Russian short-range and medium-range missiles, including the SSC-8 ground-launched cruise missile and the Kalibr SS-N-27 system. In addition, Russia is developing “innovative nuclear weapons” that include very low power nuclear weapons: less than 1 kilotons (the TNT equivalent is 1000 tons), which will deliver “precision guided missiles”.

Russian gunsmiths have been working on these progressive nuclear weapons since the end of the 1990, Bill Hertz points out. He tells at the same time about the weapons of the Russians, which is capable of generating “specialized effects”. Here the analyst included neutron bombs, which, instead of a big explosion, are killed by radiation; electromagnetic impulse blasts that destroy electronics, and x-ray and gamma weapons.

Finally, the Russians will equip even satellites with low-powered nuclear weapons. From there, they will hit the enemy with an accuracy of "several feet". Also, their missiles will "penetrate the ground before detonation."

It is estimated that the arsenal of tactical nuclear weapons in Russia now ranges from 3.300 to 5.700 units.

James R. Howe, an expert on nuclear weapons, said that according to his forecast, Russia will have at least 8.000 warheads in the next six years.

And what does Russian President Vladimir Putin say? Back in 2012, he said that by 2022, Russia would build 400 new intercontinental missiles that would be equipped with 6-10 warheads.

Mr Howe believes that in the coming years Russia is likely to plan to combine high-power, medium-power and low-power warheads integrated with cyber, space, defense and non-nuclear forces capable of overcoming the US defense.

“Russia's buildup of active and passive defense and space weapons,” this expert believes, indicates that Russians have their own opinion about the role of nuclear forces. They rely on "useful" weapons that can be used consistently "for the purpose of conflict."

According to the same Howe, the number of high-precision low-powered warheads in itself indicates that Moscow is considering a “far-reaching nuclear conflict”, and not at all that which Washington implies in its predictions, developing its nuclear deterrence system.

And it was not for nothing that in January 2017 at the Pentagon Council (Pentagon's Defense Science Board) in a report for the new Trump administration sounded a message about the need to consider the issue of creating their own nuclear weapons with low-power charges. And the development of appropriate technologies "will require the abolition of the ban on new nuclear weapons by the Congress." The council questioned the Obama administration’s suggestion that reducing the role of nuclear weapons in the United States would lead to a similar stance by other states. The Pentagon today are committed to "nuclear deterrence." The report also says that the Russians “plan” to use low-power nuclear weapons against the better armed forces of NATO as part of their doctrine.

In addition, the Russian military "is already boasting" that the current Russian nuclear forces "significantly exceed the American forces."

Thus, the forecasts of the CIA came true: as early as August 2000, department specialists indicated that Moscow plans to use very low-power nuclear weapons, including missiles with directional emission of radiation.

Regarding the modernization of underground complexes, Pentagon officials said that the Russians are currently modernizing two large command centers, as well as several small facilities, including a secret complex called “Kosvinsky Stone”, located in the Urals, about 850 miles to the east from Moscow.

"Kosvinsky Stone" - the main Russian command and staff center in Russia, indicates Hertz. It includes an underground railway system, which will be used "for the transportation of Russian rulers from Moscow."

Another command post, located about 850 miles from Moscow, is located on Mount Yamantau in the Urals (near Beloretsk).

Other underground control bunkers were also "identified by American intelligence." One is in Voronov (approximately 46 miles south of Moscow), the other is in Sharapovo, about 34 miles from Moscow. Both also have underground railway lines.

The material, we add, does not specify where the Pentagon specialists became aware of the expected date of the final build-up of warheads (2026). Also, sources are not named, from which experts have gathered data on the number of missiles and the power of charges from the Russians.

In fact, it is impossible to find in open access information on the number of tactical nuclear weapons of the Russian Federation. Rather, you can find, but it will be speculation or assumptions of analysts. The scouts that Bill Hertz mentions must have sat down somewhere in the Russian Ministry of Defense (and perhaps in the bunker) and from there send their latest reports from the front of the coming nuclear war to their overseas bosses.

In addition, today Russia is noticeably losing to the Americans in terms of the number of cruise missiles. About this in the material of Mr. Hertz, too, not a word. This is understandable: otherwise, the very thesis about the Russian nuclear threat will come to naught. And there will be a thesis about the threat of the American.