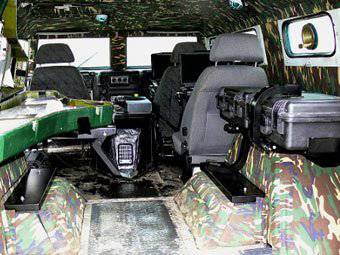 Lenta.ru On the basis of the armored car "Tigr", produced by "Arzamas machine-building plant", a mobile complex for controlling the Dragonfly and Lastochka unmanned aerial vehicles was created. As reported on the website of the Military Industrial Company, the new complex was named the Tiger MK-BLA-01.


The complex was created by experts of the "military industrial complex" and the St. Petersburg concern "Vega". The vehicle has containers for transporting reconnaissance UAVs Zala 421-08 "Dragonfly" and Zala 421-04M "Swallow" with a range of 25 and 45 kilometers, respectively.

The Dragonfly UAV weighs 2,5 a kilogram, is equipped with GPS / GLONASS satellite navigation modules and is capable of speeding up to 130 kilometers per hour. The drone is equipped with a 12 megapixel camera, a video camera and a thermal imager. The duration of the flight of the UAV is 70 minutes. The video presentation of the device can be found here.

The swallow weighs a kilogram of 5,2 and can reach speeds of up to 120 kilometers per hour. The UAV is equipped with a GPS / GLONASS navigation module, as well as a more efficient IR-radiation sensor, a camera and a video camera compared to the Dragonfly. The device can be in the air for up to two hours. More details about the characteristics of the drone can be found here.

As noted in the press release "MIC", "Tiger" MK-BLAH-01 is suitable for operation in harsh climatic zones and, as tests have shown, it is capable of performing tasks at air temperatures from -40 degrees Celsius and above. Due to the high cross-country ability, the Tigr MK-BLA-01 can also be used in the conditions of Siberia and the Far North. In the summer of 2012, the complex will be tested in hot climates.
Ctrl Enter
Noticed oshЫbku Highlight text and press. Ctrl + Enter
We are
Old and new ways of dealing with unmanned vehiclesChinese GPS is open for civilian use.
Military Reviewin Yandex News
Military Reviewin Google News
33 comments
Information
Dear reader, to leave comments on the publication, you must sign in.