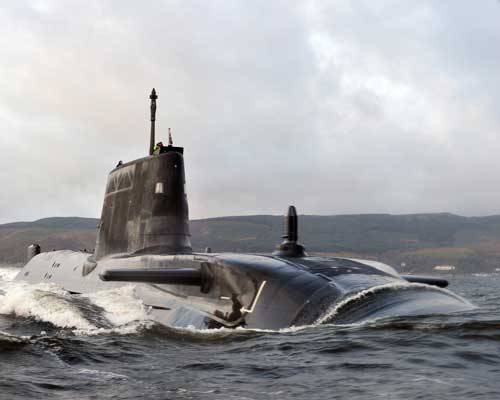 The composition of the British Navy adopted a multi-purpose nuclear submarine of the new generation Astute. The solemn ceremony was held on August 27 at the Clyde naval base, to which this submarine was assigned, having received the S119 airborne number.

The entry into operation of the head class Astute submarine is very important for the Royal fleet. The first three boats of the new project, developed by BAE Systems, were ordered in 1997. Initially, they were supposed to replace some of the remaining Swifture-class multipurpose nuclear submarines that remained in service.

However, the implementation of the planned plan was greatly delayed. The lead submarine was laid in 2001 year, the other two - in 2003 and 2005-m. For the construction of the first submarine took nearly a decade. By November, 2009, the implementation of the program was delayed by almost five years, and the planned budget was exceeded by 53%, or 1,35 billion pounds sterling (it was assumed that the cost of the first three submarines of the series would be 3,9 billion pounds).

In August, 2006, BAE Systems signed a contract to increase the order by four submarines. Astute was launched in 2007 year, at the same time the British Ministry of Defense recommended the developer to reduce the declared value of the ships by 45%, threatening to abandon their purchase, if this is not done. Some reduction in the cost of the program really took place.

Meanwhile, today only one Swiftsure class boat remains in the royal fleet, which should be written off at the end of 2010. Moreover, in December, the 2009 had suffered this fate from the head multi-purpose submarine of the Trafalgar class. That is, due to the delay of the Astute project, the submarine forces of the British Navy currently have a weakened composition.

The Astute class British Navy submarine is an atomic-powered submarine that should replace the five types of Swiftsure class submarines launched between 1973 and 1977 years and depleted.

Initially, the order was placed only on 3 submarines, but the UK Ministry of Defense (MoD) announced plans to produce three more such submarines. Astute's tactical and technical characteristics have been greatly improved compared to the Trafalgar class submarines of the British Navy's 1 flotilla, the second squadron of submarines based in the Devonport naval base. The new Astute will be relocated to the Faslane base in Scotland.

Astute class boats are designed to combat enemy submarines and surface ships, conduct reconnaissance and strikes against ground targets. The concept of this type of submarine is consistent with the strategy of the “maritime component of combined operations” adopted by the British Navy after the end of the Cold War.

Astute displacement - 7800 tons, length - 97 meters, crew - 98 people (including 12 officers). Each sailor has his own bed - so far the British submariners had one berth for two people.

In accordance with the stated characteristics, the submarine speed of the boat is up to 29 nodes, the depth of immersion is up to 300 m. Autonomy is 90 days. The submarine is equipped with installations designed to obtain oxygen and fresh water from the outboard.

The submarine is armed with Spearfish 533-mm torpedoes, Harpoon AGM-84 anti-ship missiles and RGM / UGM-109E Tomahawk Block IV cruise missiles (CR). The “tactical” Tomahawk “tactical” Tomahawk designed for network-centric warfare can also be used, the development of which is not yet completed. The boat has six torpedo tubes. Ammunition - 38 torpedoes and missiles.

The power plant consists of a Rolls-Royce PWR2 water-cooled nuclear reactor, the boat running is provided by a jet propulsion unit.

The submarine is equipped with Thales Sonar 2076 Stage 4 sonar complex (GAK), similar to GAK now installed also on Trafalgar class boats. The complex, in addition to long-range airborne antennas and bow antennas, includes a hydroacoustic station with flexible extended towed antennas, a station for detecting hydroacoustic signals and a mine-search. At the end of 2010, the modernization of the existing Sonar 2076 Stage 4 complexes on the British NPS will begin to the latest Stage 5. GAK Sonar 2076 is positioned in Britain as the best in the world.

Astales are equipped with two Thales' optico-electronic periscope-mast CM010, which do not descend into the solid hull. For a review of the surrounding space, such a periscope has a high-definition color TV camera, a camera for working in low light conditions, and an infrared camera. The use of devices of this type allows better display of what is happening at sea, as well as reduce the visual, acoustic, radar visibility of submarines going to the periscope depth.

In general, in the characteristics, the composition of weapons Astute is not something outstanding. In terms of basic indicators, they are superior to both American submarines of the Virginia class and Russian SSGNs from the 971 project. True, the radio-electronic and hydroacoustic equipment of the Shchuk-B combatants can no longer be called the most perfect, and not a single multi-purpose boat of the fourth generation of the 885 project has yet become part of the Russian Navy.