Against the background of attacks - the decision to arm the aggressor

December 15 2017
18
Here is a “truce” for all of us! So we have the "Minsk Agreement"! The news coming in the last days from the Donbass is disappointing: a violation of the silence regime, shelling, damage to residential buildings, wounded civilians, dying servicemen of the DPR ... 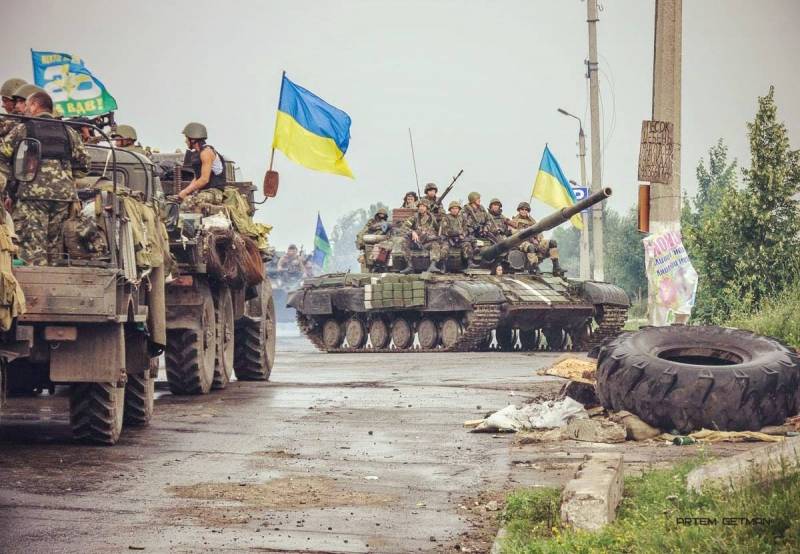 So, on December 12, during the shelling, two civilians, a man and a woman, were wounded by criminals from the Ukrainian Armed Forces in Dokuchaevsk. On the night of December 13, the center of Gorlovka was fired, the gas pipeline and several houses were damaged, and then the Kiev district of Donetsk was hit by the fire, where the gas pipeline was also disabled. In the village of Krasny Partizan (near Yasinovataya), due to the violation of the truce, a group of workers who tried to repair the power lines was in danger. Only by a miracle no one was hurt. Although these works were agreed with the Ukrainian side, which guaranteed the safety of staff in the presence of the OSCE mission.

In addition, in the Luhansk People's Republic in the city of Pervomaisk, as a result of the shelling, one of the families with children lost their home ...

14 December, the village of Krasny Partizan again came under fire, a residential building was damaged. In Donetsk, the enemy fired at the Petrovsky district. And in Dokuchaevsk a civilian was wounded again.

And on this background - there are sad messages from overseas. Two countries at once - the USA and Canada - expressed their intention to supply the regime of Ukraine weapon. They don’t hear the whistling of shells and baby crying, there they don’t see the blood of the wounded - there politicians sitting in comfortable rooms decide how to once again support their Kiev lackeys.

December 12 American President Donald Trump approved the Pentagon's budget. This document provides for the allocation of 350 millions of dollars for training the Ukrainian military and for supplying arms to Kiev. While - defensive. But more and more often in the USA they talk about the possibility of supplying lethal weapons.

December 13 - on the very day when the children of Pervomaisk lost their home, and the workers miraculously escaped death - the Canadian authorities decided to put Ukraine on the list of countries where it was possible to supply lethal weapons. This is done for the sake of "strengthening the bilateral relations between Ottawa and Kiev." It only turns out strengthening relationships ... on someone else's blood.

Maria Zakharova, a spokesman for the Russian Foreign Ministry, spoke out against such decisions: “It’s clear that pumping Ukraine with American and Canadian means of warfare pushes its leadership, sabotaging the peaceful settlement of the opposition in the east of the country, to new military adventures.” "The conflict in the Donbass, which became a consequence of the coup d'etat in Kiev, cannot be resolved, but the blame for the death of people will fall on those who will give weapons to the murderers," the diplomat added.

The head of the State Duma Committee on International Affairs Leonid Slutsky (deputy from the LDPR faction) also condemned the decision of Canada. He said that this is one of the forms of open external intervention in the conflict, it only postpones the implementation of the Minsk agreements.

How the Minsk Agreements are “implemented” - we see from reports coming from the DPR and the LPR. To these dramatic events one can add the recent seizure by the punishers of the Ukrainian Armed Forces of two villages in the “gray zone” - Gladosovo and Travnevy (near Gorlovka). Now, according to the information voiced by Edward Basurin, the peaceful population of these villages are going to be used as a human shield. Some of the inhabitants were captured by the punitive.

Yes, there is also Arsen Avakov, the Ukrainian Minister of Internal Affairs, appealed to the National Guard under the call for the so-called "de-occupation" of Donbass. I mean, a representative of the official Kiev openly proposes to crush the agreements fastened by the international community. True, Avakov speaks of "peaceful de-occupation", but it is clear that the word "peaceful" in this case is nothing more than a cover: both he and his bosses are well aware of what this "peaceful" scenario will turn out to be.

Instead of unequivocally, unequivocally condemning the criminal intentions of Kiev, some countries act in the opposite way - they offer the side, violating the truce, assistance in the form of additional armament. Indeed, it is difficult to call it something else than open, shameless complicity in crimes.

During his press conference, Russian President Vladimir Putin was forced to admit: “As for the Minsk format and its effectiveness, efficiency is low, primarily because of the unconstructive position of representatives of today's Kiev authorities.”

This is the truth that they do not want to see in Washington and Ottawa. Unfortunately, not everyone sees it even in Moscow. Otherwise, they would not have shown the film glorifying Ukrainian punishers from the notorious battalion “Aydar” (and this battalion is known, including torture, applied to civilians). Unfortunately, this film received an award at the Artdocfest international documentary film festival, and three activists who opposed its show were sentenced to 7 days of arrest ... Perhaps the methods of people who protested against glorifying war crimes are not entirely correct. But still, it was an action of fair anger.

Those who continue the criminal war, who bombard civilians, as well as their high patrons, have not yet spent a single day in prison, have not been held responsible for their bloody crimes. And it is possible that in the coming days we will again hear about the destruction of another house, the injury of another civilian and hundreds of ammunition fired at the cities of Donbass ...

Ctrl Enter
Noticed oshЫbku Highlight text and press. Ctrl + Enter
We are
Weekly summary (30 January-5 February) on the military and social situation in the DPR from the military officer "Mag"Reports from the militia of New Russia for 7 September 2014 of the year
Military Reviewin Yandex News
Military Reviewin Google News
18 comments
Information
Dear reader, to leave comments on the publication, you must to register.