The first Indian submarine of its own construction was adopted


The first submarine, built in India, was transferred to the fleet in September, and today received the status of a combat unit. Kalvari is the leading submarine of the same type and is based on the French project of diesel-electric submarines Scorpene. 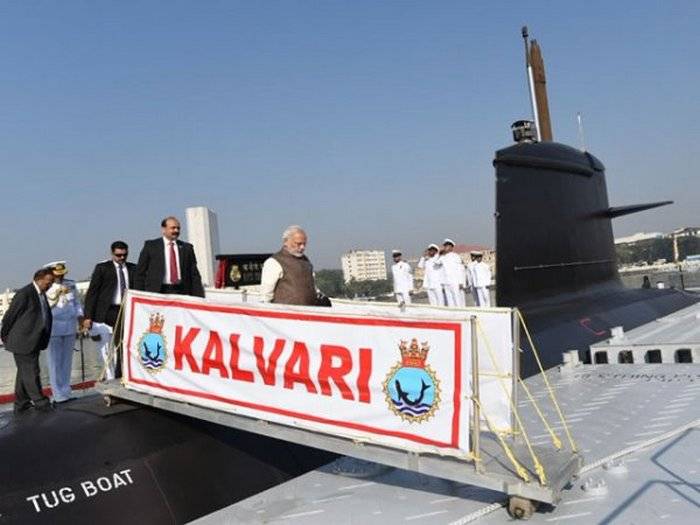 The contract for the construction of six diesel-electric submarines of the Scorpene type (known as Kalvari in India) was signed between the Ministry of Defense of India and the French company DCNS in 2004. According to the agreement, the first submarine was to be built in 2012 year, but today the implementation of the program is three years behind the deadline, and the costs for it have increased from the planned $ 3 billion ($ 500 million for each submarine) to more than $ 4 billion. One of the reasons for the increase in the cost of the program was the change in the project for part of the submarines, which should receive an anaerobic power plant.

Kalvari submarines are built as part of the thirty-year re-equipment plan for Project-75, adopted in 1999 year. In the future, as part of the Project 75 (I) plan, it is planned to build six more submarines to arm the Indian fleet. Submarines of the Scorpene type were designed by the French company DCNS for the needs of the French Navy, but after the French military department abandoned diesel-electric submarines in favor of nuclear ones, the project became an export one. To date, submarines of this type are built for the Navy of Chile, Malaysia, India and Brazil, reports "Warspot"

Ctrl Enter
Noticed oshЫbku Highlight text and press. Ctrl + Enter
We are
India adopted the first submarine of its own production.The first launch of the SM39 rocket from an Indian submarine of the Scorpene type
Military Reviewin Yandex News
Military Reviewin Google News
18 comments
Information
Dear reader, to leave comments on the publication, you must to register.