December 14 2017
29
The Soyuz MS-05 spacecraft descent vehicle with three crew members of the International Space Station (ISS) landed in the Kazakhstan steppes in 147 km southeast of the city of Zhezkazgan. This was reported on Thursday in the Moscow Mission Control Center (MCC). 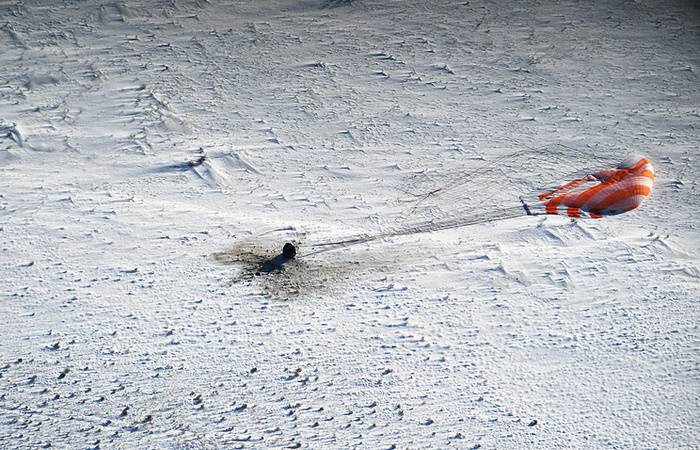 The MC-05 union undocked from the ISS in 08: 15 MSK and in 11: 16 MSK entered the Earth’s atmosphere. Roscosmos cosmonaut Alexander Misurkin and NASA astronauts Mark Vande Hi and Joseph Akaba remained at the station. the Soyuz MC-07 spacecraft will fly into space on December 17).

The capsule of the Union MC-05 was met by a group of search and rescue forces comprising X-NUMX Mi-14 helicopters, two An-8 airplanes and one An-12. The operation involved about 26 military, including a medical team of the Central Military District.

Specialists of the search and rescue forces took the crewmembers who returned to Earth from the descent vehicle and carried them to a heated medical tent, the MCC reported.

All crew members feel good
- Said at the Center.

Ctrl Enter
Noticed oshЫbku Highlight text and press. Ctrl + Enter
We are
The head of Roscosmos: Russia will build its orbital station after the ISSFailures of "Roscosmos" in the assessment of NASA
Military Reviewin Yandex News
Military Reviewin Google News
29 comments
Information
Dear reader, to leave comments on the publication, you must to register.