How Arabs will punish America 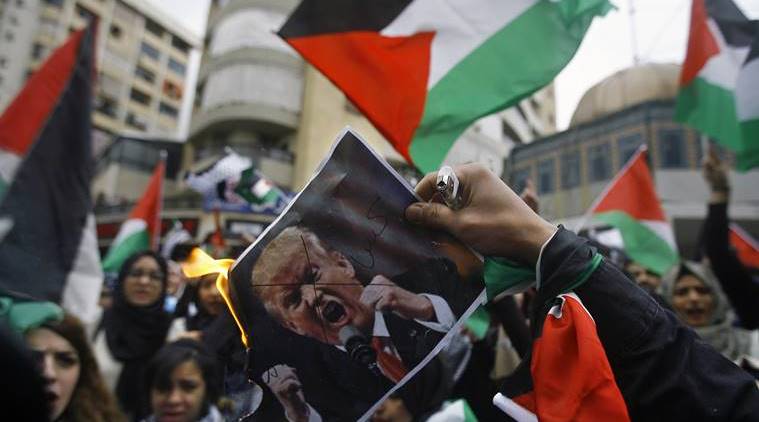 Agency Reuters An amazing message was conveyed from Cairo: in the Arab world, the question was raised about imposing economic sanctions against the United States.

The other day, Arab foreign ministers called on the United States to renounce the decision to recognize Jerusalem as the capital of Israel, saying that this step would lead to an increase in violence throughout the region.

The decision of President Donald Trump was "a dangerous violation of international law," has no legal force, and therefore is "invalid," the League of Arab States (LAS) said in a statement. This statement was issued following a meeting in Cairo, which was attended by all members of the Arab League.

Washington's recognition of Jerusalem as the capital of Israel cancels the long-standing US policy that the status of the city should be decided in negotiations with the Palestinians, since the latter want East Jerusalem to be recognized as the capital of their future state.

“The decision has no legal force ... it intensifies tensions, incites anger and threatens to plunge the region into even greater violence and chaos,” said the League of Arab States.

The Arab League noted that they would draw up a resolution for the US Security Council, which should reject the American decision.

Moreover, the Minister of Foreign Affairs of Lebanon, Mr. Gibran Basil, said at an emergency meeting that the Arab states should consider introducing economic sanctions against the United States and thereby prevent the US embassy from moving from Tel Aviv to Jerusalem.

“Pre-emptive measures [should be] taken ... starting with diplomatic measures, then political and right up to economic and financial sanctions,” he listed the sanctions, but avoided specific details.

However, we note that in the final statement of the League of Arab States economic sanctions were not mentioned in any way. This is not surprising: the Arab states are experiencing far from the best of times because of the chaos in the region and because of the decline in world oil prices. Because of the last their egg capsules are empty.

On the other hand, the Arab monarchies are far from the allies of the United States, which were considered even during the time of Obama, the president, in which Washington’s ties with the Arab world began to weaken quickly. This was caused not only by the relatively cautious policy of B. Obama, after much deliberation, who refused to fully participate in the Syrian war of the United States, which was expected by other Persian Gulf monarchies, but also by the shale revolution in the United States, which reduced the US energy dependence on Arab oil-producing countries. In the 2017 year, it is possible with some degree of confidence to even talk about strengthening the relations of a number of Arab states with Moscow, which would look like a challenge with Obama. However, Moscow’s cooperation with Tehran in the Syrian struggle against IG (forbidden in the Russian Federation) does not promote the rapprochement of some monarchies with Russia, and therefore it’s not possible to talk about geopolitical “friendship”. Too different interests of the parties, often opposite.

As for the draft sanctions, it does not yet exist in principle. Will it appear? Hardly. The members of the Arab League, even if they come to a single agreement, are unlikely to be able to punish the United States in any way. Particularly ridiculous is the kind of “financial” punishment in Washington. What, the members of the Arab League suddenly willfully change the rules of the international game and begin to sell oil for rubles? Or even refuse to sell it, despite the long-term contracts? Or will they suddenly decide to quarrel with Trump, who considers Shiite Iran hated by many Sunnis as a terrorist state? Of course, there will be no sanctions. They love to row in the Middle East, but no one has canceled the dependence of these countries on oil and gas revenues.

Recall also that, discussing the decision of the United States, Secretary General of the League of Arab States A. Abul-Gate and Foreign Minister of Palestine R. Al-Maliki called on the international community to recognize East Jerusalem as the capital of the Palestinian state.

“The decision [of the United States] is reduced to the legalization of the occupation,” the Arabic website quoted the English-language website "RT". In his opinion, the Secretary General referred to Israel’s continued control over East Jerusalem after the 1967 war of the year. He added that the United States had undermined its role as a mediator in the Middle East peace process, in fact, supporting the calls made by the Palestinian minister to find a better mediator instead of America.

Earlier, United States Special Ambassador to the United Nations Nikki Haley said that the United States in the peace process is trusted more than other 14 members of the UN Security Council. Haley even promised to “protect” Israel from “unjust” attacks made through the United Nations. She also said that her country “will not lecture to countries to which there is not enough confidence when it comes to a fair attitude to both Israelis and Palestinians.”

As a result, the general criticism of the decision of Washington at an emergency meeting of the Security Council was ignored by the American side.

Russian experts do not believe the formidable statements of some participants of the Arab League. At the same time, the very fact of such statements from the Arab world shows how rapidly relations between the United States and their Middle Eastern allies are deteriorating.

“The very fact that tough actions are being discussed is bad news for Washington ", - said in an interview with the newspaper "Sight" Dmitry Abzalov, President of the Center for Strategic Communications.

However, in his opinion, if any actions are taken, they will be of a diplomatic nature: “For example, you can limit your diplomatic missions in the United States. Or, on the contrary, to limit the activities of American diplomatic missions in the territory of countries that adhere to this position. ” Or there is such an option: "You can support Palestine and, for example, announce the transfer of the embassy to the eastern part of Jerusalem, which Palestine considers its own."

On the territory of the Middle East is located a significant part of the US military bases, recalls Abzalov. And here, too, some measures are possible: "There is an opportunity, for example, to complicate their functioning, for example, rent increases, restrictions on the activities of military personnel in these countries."

In general, it will become more difficult for Americans to engage in dialogue with Arab states, especially on controversial issues. The Arab world will try to use the current situation to strengthen its negotiating positions, Abzalov said. According to him, apart from the Arab countries, Turkey will also take advantage of this moment, which has a number of contradictions with the United States.

Today, the Arabs are not interested in the collapse of the oil market. And the dependence of the Arab monarchies on the United States is too great to talk about the sanctions opposition. In addition, there is no war, there is only local unrest. And Mr. Trump in the White House, surrounded by advisers, is well aware that the situation will remain under the control of the United States and Israel. In the Arab League this is also understood. Not without reason, the proposal of Lebanon on sanctions up to the financial did not even fall into the final statement of the Arab League. The "clean" sheet of the communique shows that the Arab world will not issue any such sanctions to Washington. Not by strongons with hegemon!

At the same time, Trump’s decision has already brought suffering and pain to the region.

A week ago, unrest and demonstrations of Palestinians began in Jerusalem against the US decision to recognize the city as the capital of Israel. Collisions occurred and in Hebron, Bethlehem, and other cities in the West Bank. The Israeli police used tear gas, rubber bullets and sound grenades. According to Reuters, more than thirty people were injured.

There is a dark symbolism of dates: December 9 was fulfilled thirty years since the beginning of the first Palestinian intifada. 1987 to 1993 More than two thousand Palestinians and one hundred and eleven Israelis died in the battles for the separation of Palestine from Israel.

And now the region is hot again.

Observed and commented on Oleg Chuvakin
- especially for topwar.ru
Ctrl Enter
Noticed oshЫbku Highlight text and press. Ctrl + Enter
We are
Trump "realized the reality" and recognized Jerusalem as the capital of Israel. Trump countered the whole world!The Palestinian problem and the question of the survival of Israel in the future
Military Reviewin Yandex News
Military Reviewin Google News
32 comments
Information
Dear reader, to leave comments on the publication, you must sign in.