December 14 2017
24
There was such an epirus commander in ancient times - Pierre. First of all, he became famous for his “victory”, which turned out to be no victory at all. Not everyone remembers that he fought against Rome, that he won in 279 BC in the battle of the city of Auskul. But the expression "Pyrrhic Victory" is known to all. Like his bitter words: "Another such victory, and I will remain without troops." So it finally happened.


But what happened as a tragedy is repeated in the form of a farce. It is good to introduce another term - “Tramp victory”. In the sense of - victory, which was not. Or even this: the victory that was, but something completely different forces have achieved it. In any case, one cannot be proud of such a victory - there are even fewer reasons for this than even Pyrrhus. 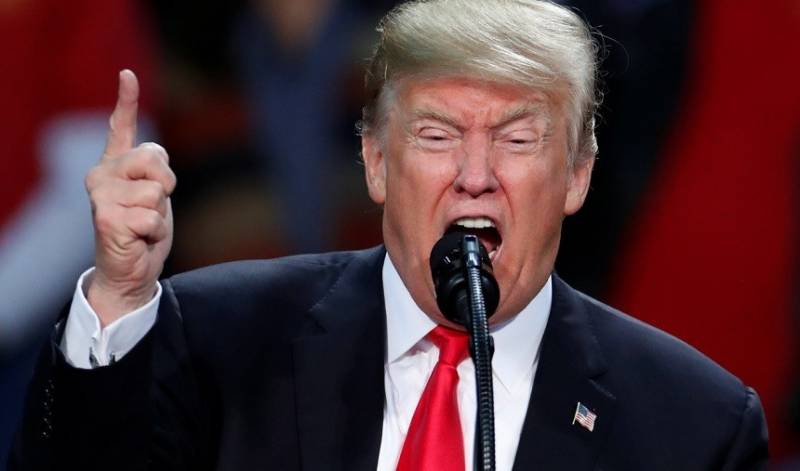 Speaking December 12 at the White House about the draft law on financing the US Department of Defense, Donald Trump said: “As you know, we won in Syria and Iraq. But they [the terrorists] moved to other places. We intend to destroy them there as fast as they move. Over the past 8 months, we have achieved greater success in the fight against IS, than during the whole period of our previous administration.».

The statement that Washington defeated the terrorists of the “Islamic state” (an organization banned in Russia) is a farce. This is the exaggerated “tramp victory”.

Unfortunately, it is not necessary to say that the “Islamic State” (IG) has been completely defeated. So there is no victory at all. However, there is the following fact: so powerful blows were inflicted on this terrorist organization, that it was considerably weakened and no longer exists as a force that held a large part of Syria and Iraq under its control. True, the danger she still represents, as a mortally wounded beast. But who inflicted such wounds on this “beast”?

The US president is trying to ascribe this merit to himself. The facts show the opposite: Russia's intervention in the Syrian conflict allowed the Islamic State irreparable damage. These are Russian pilots, infantrymen, nurses, officers, soldiers died in this fight. Moreover, on the part of the Russian Federation there was a legitimate intervention carried out at the request of the Syrian leadership. While the United States was there it is not at all clear why.

Not so incomprehensible. Only the answer “why?” Is different. Washington and the coalition led by him acted approximately according to the following principle: “one strike against the“ Islamic state — two attacks against the Syrian army and its allies — a dozen attacks against civilians ”. As a result, all the actions of the Americans and their allies were, by and large, in the interests of the "Islamic state".

Is it necessary to remind once again that without US intervention in Middle Eastern affairs, starting from 2011, there could have been no terrorist organization such as IS?

And Trump is now talking about some kind of "victory" ...

However, this is not the first "Trump victory". A few days earlier, while in the state of Florida, he completely broke out into a pretentious speech in which he attributed other victories to the United States: “We are the nation that dug the Panama Canal, won two world wars, sent a man to the moon and brought communism to its knees».

The "victory" of the United States in two world wars - until such an absurdity, it seems, no one has yet agreed. Especially if you take into account the very modest role of Washington in the First World War. Until 1917, the United States maintained neutrality altogether. They had to somehow participate only after the German submarine sank the British ship Lusitania, which was heading from America to Britain. Anyway, it's hard to say who was the winner in the First World War.

But in the Second World War, the winners, of course, were. But, above all, is the Soviet Union. What then recognized all of Europe. Recognized by our then partners Roosevelt and Churchill. Trump is not here, of course, who is now trying to downplay the role of the USSR. But he too assertively attributes the victory exclusively to the United States, by the way, offending his closest ally — Britain, which also “plowed” (and the main thing, of course, that “plowed the tractor” —USSR!).

As for the fact that "the American nation has put communism on its knees" - this is an absurd statement. Even if a significant blow was struck at the social camp at the end of 80 - the beginning of 90-s of the last century - you cannot bring the idea that continues to live on Earth to its knees. That very idea, under the banner of which, by the way, Hitler's fascism was crushed.

In general, what kind of Trump’s “triumphant” statement is that any will turn out to be a lie.

"Another such victory, and I will remain without an army," Pyrr lamented. About Trump, you can say this: one more such victory, attributed to the States - and all sensible people in the world will laugh at Washington.

Ctrl Enter
Noticed oshЫbku Highlight text and press. Ctrl + Enter
We are
Reports from the militia of New Russia for 27-28 September 2014 of the yearResults of the week. "Well, do not change me because of every idiot!"
Military Reviewin Yandex News
Military Reviewin Google News
24 comments
Information
Dear reader, to leave comments on the publication, you must sign in.