December 18 2017
10
Kayaba Ka-1 is a Japanese reconnaissance gyroplane created during the Second World War. This aircraft was used as a passing (including sea) reconnaissance aircraft, including for adjusting artillery fire and fighting submarines. The manufacturer of the autogyro was the Japanese company Kayaba Seisakusho. The autogyro was used by the Imperial Army of Japan in the period from 1942 to 1945. During this time, 98 aircraft were released in two versions: Ka-1 and Ka-2.


At the end of the 1930-s, the Japanese military, who tried to focus on the most advanced developments in the field of global aircraft industry, turned their attention to the rotorcraft flying in the air - autogyros. The military of many countries attracted the ability of these machines to fly up almost vertically and literally hover in the air above one place. Such opportunities made it possible to count on the high efficiency of their use as artillery spotters. In Japan, these types of equipment simply did not exist, so they decided to search for suitable aircraft abroad. 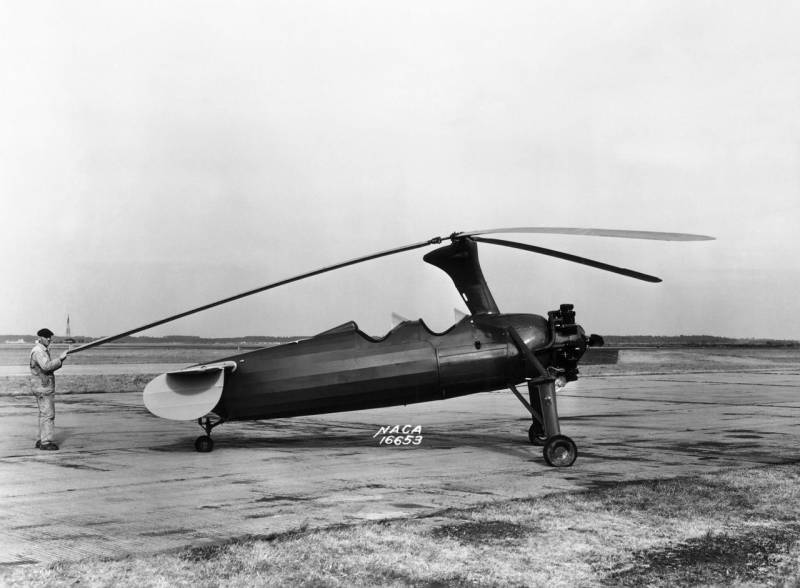 Autogyro Kellett KD-1
The first gyroplane was invented by an engineer from Spain, Juan de la Cerva, this happened in 1919. His gyroplane S-4 completed its first flight on January 9, 1923. The main period of development of these aircraft occurred in the 30s of the last century. The gyroplane was a rotary-wing aircraft, which used a rotor to rotate automatically to create lift. Another name for gyroplane is gyroplane (this term is officially used by the Federal Civil Administration aviation USA).

Like helicopters, the gyroplane has a rotor, which creates lift, but the gyroplane's screw rotates freely under the influence of aerodynamic forces in the autorotation mode. In order to fly, in addition to the freely rotating rotor, the gyroplane has an engine with a pulling or pushing propeller (propeller), which provides the aircraft with horizontal speed and thrust. When the gyroplane moves forward, it creates the necessary counter-flow of air, which flows around the rotor in a certain way and causes it to switch to autorotation mode, to rotate, creating the necessary lifting force.

The absolute majority of autogyros are not able to take off vertically, however, they require a significantly shorter take-off run (10-50 meters with a rotor pre-spin system) than aircraft. Almost all autogyros are able to land without a run or with a mileage of only a few meters, moreover, they are able to sometimes hang in the air, but only with a very strong headwind. By maneuverability and their capabilities in the air, autogyros occupied an intermediate niche between airplanes and helicopters. 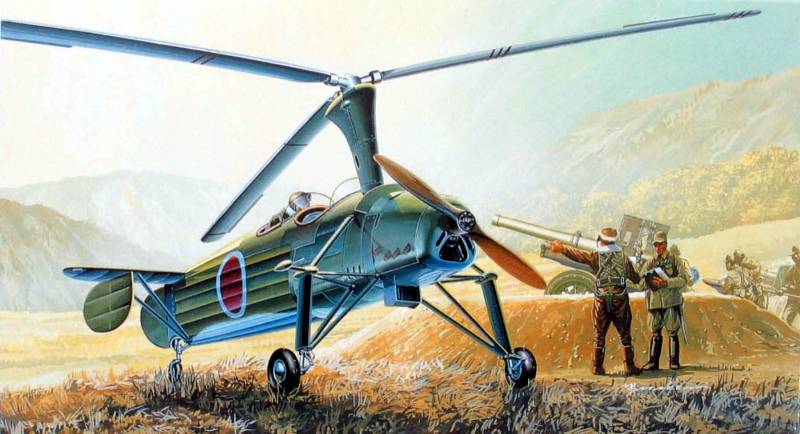 Autogyro Kayaba Ka-1
In 1939, the Japanese purchased, through nominees, one copy of the Kellett KD-1A autogyro in the USA. Created in 1934 year, the autogyro in its external layout was similar to the English apparatus Cierva C.30. He also had two open cabins and suggested tandem crew accommodation. The model was installed 7-cylinder star-shaped air-cooled engine Jacobs R-755, which developed the maximum power to 225 hp This engine rotated three-bladed main rotor with folding blades, which was equipped with a mechanical system for promotion and a brake.

After the delivery of the KD-1A autogyro in Japan, his tests began. The flight characteristics demonstrated by the apparatus suited the military, but during one of the flights the gyroplane crashed, receiving significant damage. The aircraft was not recoverable. The wreckage of the American autogyro was transferred to a small company Kayaba, which was to create their own military counterpart based on them. The first Japanese-made autogyro, designated Kayaba Ka-1, was released at Sendai. It was a double reconnaissance gyroplane, resembling the appearance of Kellett KD-1A, but modified according to Japanese standards. The car made its first flight on 26 May 1941. The aircraft differed from its overseas predecessor mainly by the engine - instead of a Jacobs radial engine, it was equipped with an Argus As 10 engine of greater power - 240 hp.

The tests of the Japanese autogyro have been very successful. He could take off from the site with a length of just 30 meters, and with an engine that worked at full power, at an angle of attack of 15 degrees, he could practically hang over one place, and also simultaneously perform a turn around its axis - by 360 degrees. Among other things, the car was very easy to maintain, to which the military also paid increased attention. 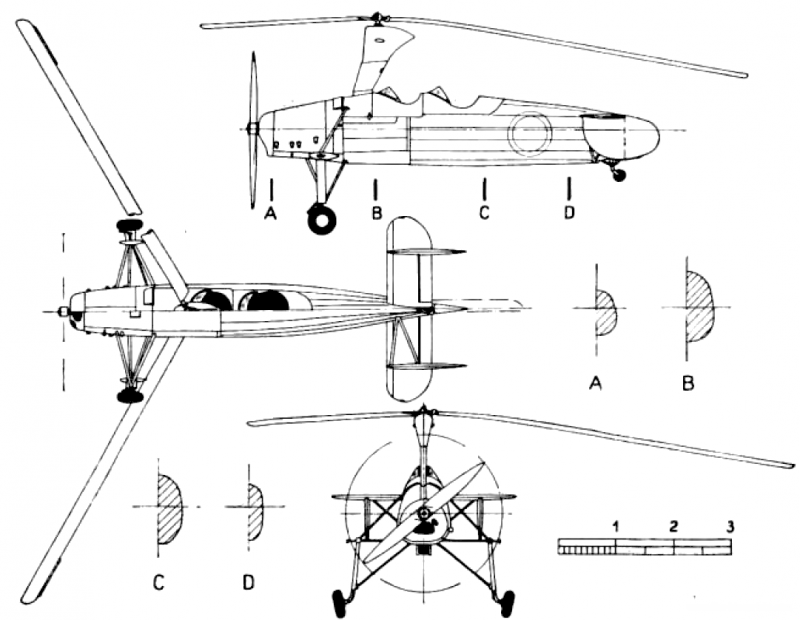 Autogyro Kayaba Ka-1
The possibilities demonstrated by the autogyro completely satisfied the representatives of the Imperial Army of Japan, so he was sent to mass production. Already in 1941, the aircraft began to flow into the artillery units, where it was planned to use them to adjust the fire from the air. The autogyro was produced in an extremely limited game. Some sources deal with 98 released copies, while others refer to 240 autogyros produced. Most likely, their release was, indeed, an extremely small amount, which determined their episodic use in military actions, on which they could not have any significant impact. It is believed that the Kayaba Ka-1 autogyros were released only 20 units, after which they began to release the Ka-2 version, on which stood the same Jacobs R-755 engine as on the American version. The total number of Ka-1 and Ka-2 autogyro wagons produced before the end of the Second World War is estimated at 98, of which 12 was destroyed before being transferred to the army, the engines remaining on 30 were not installed. As a result, the army received only about 50 of similar aircraft, of which the order of 30 machines was used.

Initially, the Japanese army leadership hoped to use the Kayaba Ka-1 autogyros in China to adjust artillery fire, but the changing course of the war required an increase in the defense of the Philippines, where the autogyros were sent as liaison aircraft instead of Kokusai Ki-76. It was a Japanese connected aircraft based on the German Fieseler Fi 156 Storch.
After the land army of Japan had its own escort aircraft carrier "Akitsu-Maru", which was converted from an ordinary passenger liner, which, in turn, with the outbreak of war, became an amphibious ship, several Kayaba Ka-1 autogyros entered into its armament. From reconnaissance they were converted into anti-submarine. Since the payload in the double version was extremely small, the crew of the gyroplanes placed on the aircraft carrier was reduced from two to one person. This allowed to take on board up to two 60-kg depth charges. In the new for themselves quality autogyros Ka-1 were engaged in patrolling the territorial waters of the country of the rising sun.

In the end, most of the available Kayaba Ka-1 and Ka-2 autogyro scooters were converted for patrol and anti-submarine service. On the escort aircraft carrier Akitsu-Maru, they were deployed from August to November 1944. Along with the Ki-76 aircraft, they were the only aircraft that could land on the short flight deck of this escort aircraft carrier, more often it was used as a ferry to transport aircraft. The ship was sunk by a US submarine 15 on November 1944 of the year. 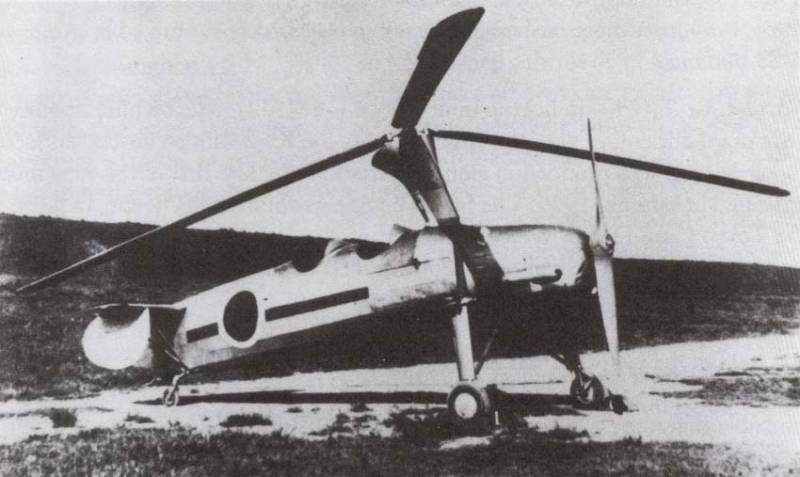 Autogyro Kayaba Ka-1
Starting in 17 on January 1945, the Ka-1 autogyros were used for anti-submarine patrols from airfields located on Ika Island. The maintenance base was located at the Gannos airfield in Fukoka Prefecture. Since May 1945, they patrolled the waters of the Tsushima and Korean Straits from Tsushima Island. After some time, the zone of the American carrier-based aviation reached the Tsushima Strait, so already in June, the remaining Ka-1 and Ka-2 autogyros were relocated to the Noto Peninsula, where they remained until the end of the war. These autogyros did not manage to sink a single enemy submarine, but they performed their reconnaissance function, engaged in the detection of submarines.