"Pioneer" flies over the sea. The horizon is filled with blood 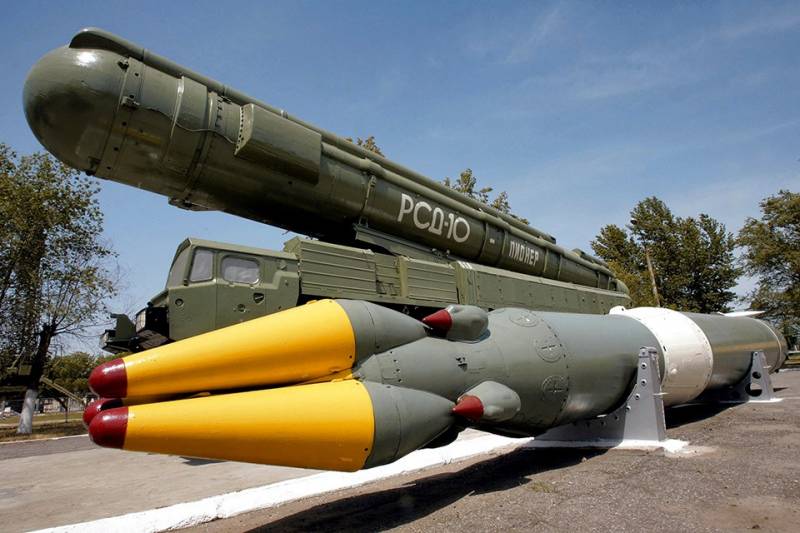 In any situation, they lost a significant part of the submarine missile carriers (SSBNs), up to two aircraft carrier groups, and lost the bulk of their fuel reserves for the Pacific fleet, docks for repairing aircraft carriers, thousands of military specialists and the only strategic submarine base in the Western Hemisphere.

Mat queen on the unprotected diagonal: the red starts and wins. “Pioneer” - the most powerful missile from the arsenal of Soviet naval weapons.

The last battle is over.
Hey, is anyone alive ?! -
In response, only the wind howl.

In these forgotten lands, just in 200 km from the US, the Gudym (Magadan-11) missile base was located, the Portal on the local slang. Fully autonomous defensive structure, representing a two-kilometer tunnel drilled in the hill with a lot of deaf branches. Entrance doors at both ends of the tunnel had a mass of 40 tons and provided protection against a shock wave from a direct hit by the warhead.

The base was divided into parts with different levels of access. The movement of goods through the tunnels was carried out by electric trolleys on the narrow-gauge railway. In addition to the two main locks, there was another exit to the surface, representing the launching structure with a retractable roof (the so-called “Dome”). 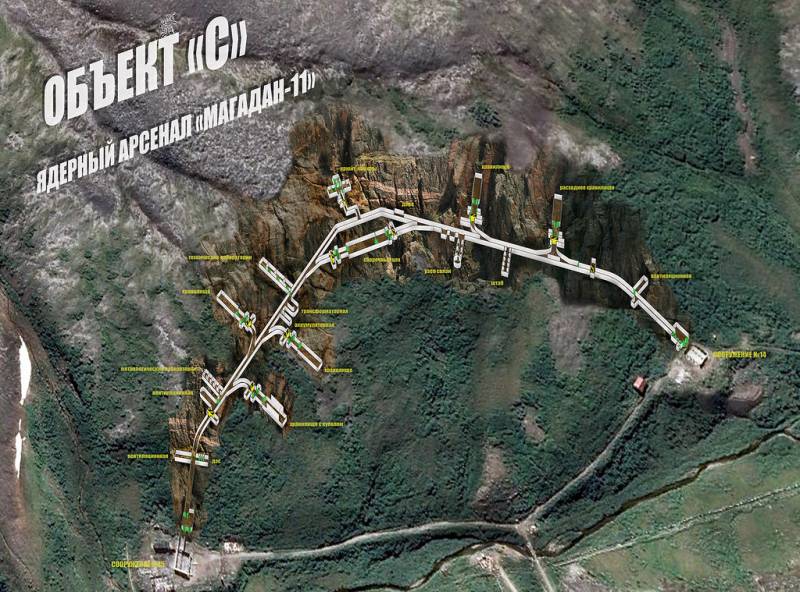 Outside the main base, on the surface there were a number of geodesically adjusted and prepared launch sites with concreted approach routes for mobile missile systems.

The rocket of the “Pioneer” complex had a split head with three blocks of individual guidance (power 150 kt) and had a range of 4500 km. The aiming system (INS) provided a circular probable deviation from the target within 500 m.

The transport and launch container with the rocket was located on the six-axle chassis of the MAZ-547В. Despite the considerable weight of the complex (the launch weight of the 37 rocket is tons), the all-wheel drive chassis (12х12) with the HP 650 diesel engine ensured sufficient mobility, maneuverability and speed up to 40 km / h on public roads.

For 15 years of operation, not a single case of a missile accident was noted. During the test, operation and elimination 190 “Pioneers” were shot. All launches are recognized as successful. The probability of hitting the target reached 98%.

SS-20 Saber - “Thunderstorm of Europe”, deployed in the western directions since 1976. The threat did not go unnoticed - in response, the “Pershing-2” missile complex (deployed in the Federal Republic of Germany in 1983 for the first time) arrived from overseas. A small deadly masterpiece by the Martin-Marietta company with a launch weight of 7 tons, equipped with a radar warhead.

Despite its phenomenal accuracy (CWO - 30 m!), The “Persings” did not reach Moscow, but they were able to “put up” in a matter of minutes the positions of the Strategic Missile Forces and command posts in the western districts. The technological level of “Pershing” went far beyond the capabilities of the military-industrial complex of the Soviet Union. It was impossible to provide an adequate response at the same level, and the Union proposed a plan for disarmament and the elimination of medium-range missiles (CIAS, signed by both parties in 1987).

“Persings” were destroyed on the stand by the method of static burning of both steps.

The Soviet “Pioneers” were shot and liquidated during launches in the Chita region, and later - by ground explosion without being extracted from the TPC.

By the spring of 1991, it was all over. Now sworn enemies stand and look at each other in the museum aviation and astronautics in Washington. 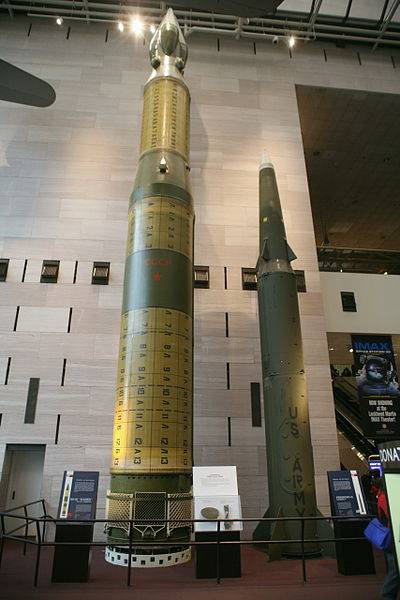 The scandalous European “voyage” of the “Pioneer” complex, which nearly stood at the end of the world, hides another, little-known page in stories RSD-10.

Why were the three complexes sent to snow-covered Chukotka? In order to break the Kitsap naval base (aka Bangor) at “X” hour.

The object has existed since 1977. Now there are based eight (of the 14 being in service) American submarines of the Ohio class, each of which carries the Trident-24 2 SLBM. There are missile storage facilities, moorings with loading equipment and the SWFPAC complex for calibrating guidance systems and developing flight missions for the Tridents.

The only base of US strategic naval submarines in the Pacific.

In addition to the strategists, two submarine nuclear-powered ships with 156 cruise missiles (USS Michigan and USS Ohio) and the three most advanced multi-purpose submarines are officially registered in Bangor: the classmates of Sivulf and Connecticut and the submarine of special operations Carter. 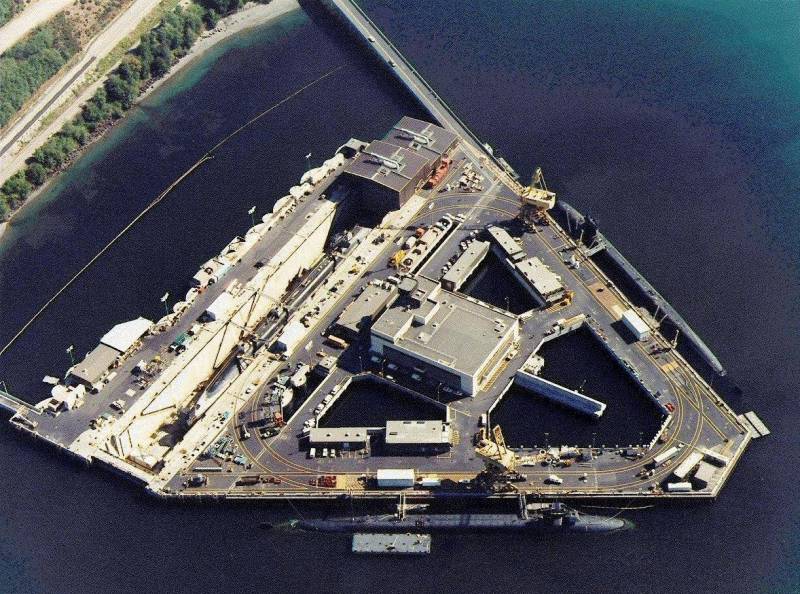 In the neighboring bays (Brementon, Everett) aircraft carrier ships “Nimitz” and “John Stennis” are moored with escort ships. In addition to the arsenal, the largest fuel storage facility of the fleet (“Manchester”) is located on the territory of the naval complex.

A large ship repair enterprise is also located here - an intermediate maintenance service “Padget Sound” with its collection of nuclear reactors (removed from 125 decommissioned cruisers and submarines) and the parking of the reserve fleet ships. “Padget Sound” is the only place in the western hemisphere where docking of atomic aircraft carriers is made.

A lot of destroyers, submarines and warships of other classes constantly “crowd” at the wall of the ship-repair enterprise. In the old days there were even more.

This is what the Kitsap Bay Bay naval complex in the northwestern United States is in and around Seattle. 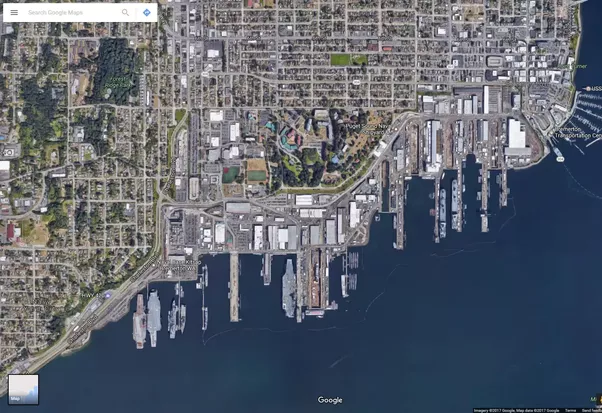 In Google images, silhouettes of aircraft carriers and military transports — the main vehicle of the US Army on the Earth globe — are distinguishable. 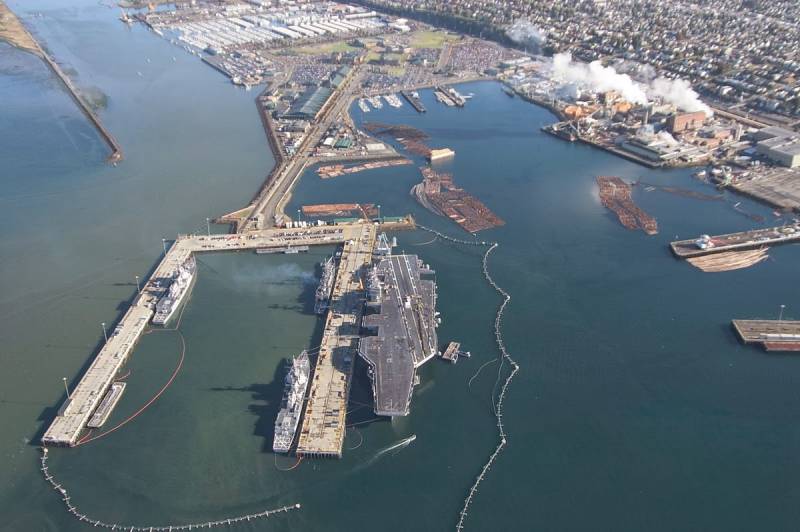 Airborne assault group at the berth of the naval base Everett

The warships on this coast are seen from the end of the 19th century. But the place does not enjoy fame among sailors - it is too cold. Because most of the large surface ships are based in areas with a much more attractive climate (San Diego, Pearl Harbor, Norfolk, where snow is a rarity), which greatly simplifies the maintenance and operation of equipment.

In order not to stain the X-rays of the eternal Californian summer, nuclear submarines with nuclear weapons were driven north. There, where they happened to be under the gun of the medium range RK “Pioneer”. 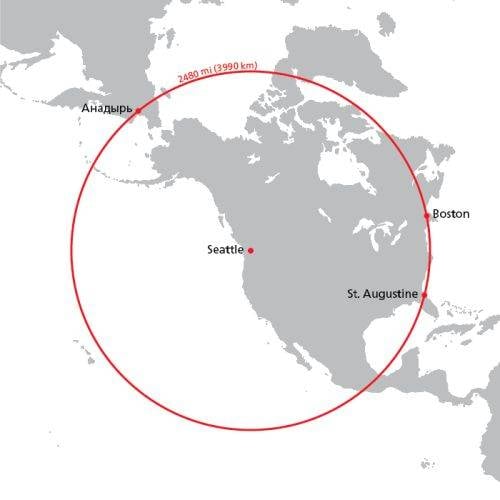 Nuclear weapon was shipped from Chukotka in 1986 year. For some time, the territory of the base “Magadan-11” was used for the storage of military property; The military finally abandoned the site in 2002. 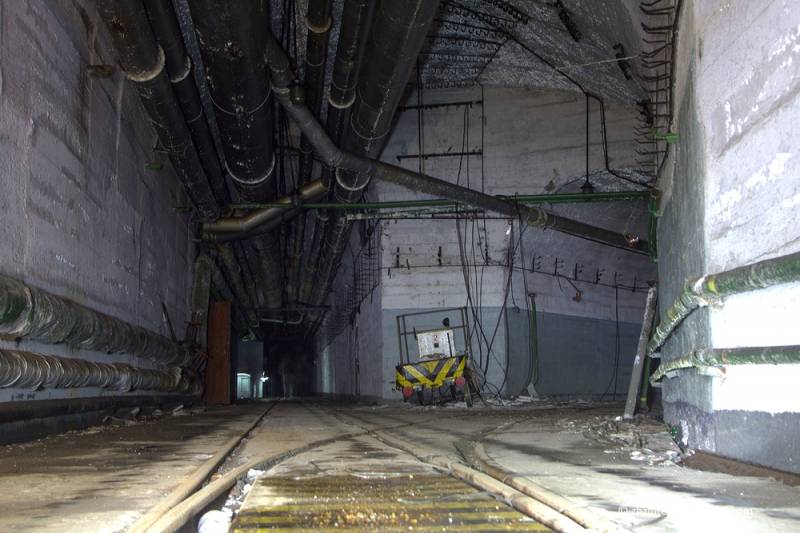 Detailed photo report on the current state of the database: https://zavodfoto.livejournal.com/5027295.html.

Ctrl Enter
Noticed oshЫbku Highlight text and press. Ctrl + Enter
We are
J-20A in the tasks of expelling the “backbone” of the US Navy from the western part of the APRNuclear potential of China: history and modernity. Part 2
50 comments
Information
Dear reader, to leave comments on the publication, you must to register.