December 14 2017
102
In the new military doctrine, the Kazakhstani specialized bodies focused on maintaining internal order. According to some Western experts, this arrangement of accents is inspired by the events in Ukraine, reports eurasianet.org.


Who is the enemy?
In late September, Kazakhstan adopted the fifth military doctrine since independence. The document reflects shifts in strategy, apparently at least partially aimed at eliminating the potential threat from a neighbor and ally of Kazakhstan - Russia, although analysts close to the government of Kazakhstan argue that the actions of the West pose the greatest danger to the sovereignty of the country.

The carefully formulated document states that it is the product of an expert analysis of the military-political situation in the world and the “changing nature of military conflicts”.

Some provisions of the doctrine allow freedom to interpret who the enemy is and what is a threat. In particular,
the list of main threats means “strengthening the confrontation between world and regional powers in an attempt to change the existing world order”
According to Georgy Dubovtsev, an expert on military issues at the Kazakhstan Institute of Strategic Studies (KISR) under the President of Kazakhstan, it is clear that the document reflects the experience of such countries as Afghanistan, Iraq, Libya and Syria, which have become arenas of mediated wars. Dubovtsev also notes that Russia did not initiate unrest in any of these countries, all problems were caused by Western governments operating under the slogans of “promoting democracy” and “fighting tyranny”.

"Hybrid Wars"
But there are clear indications that some new aspects of the Kazakh military doctrine appeared in response to completely different threats. Unlike the 2011 doctrine of the year, Kazakh military strategists are now preoccupied with the possibility of applying “hybrid methods”. Also mentioned is the threat of “encouraging and escalating armed conflict on the borders of the Republic of Kazakhstan”.
New Kazakh military doctrine is clearly connected with Ukraine
It is very similar to the doctrine of Belarus adopted in 2016, but Minsk more openly pointed out the lessons learned from the events in Ukraine, ”said Deirdre Tynan, director of the Central Asia project in the International Crisis Group organization.

After the “euromaidan”, which led to the overthrow of Ukrainian President Viktor Yanukovych in 2014, who tried to play a strategic double game in foreign policy, but on the whole was more inclined towards Russia, the Kremlin annexed the Crimean peninsula. “Capture of the Crimea” took place without bloodshed, but in the Donetsk and Lugansk regions in the east of Ukraine there was a completely different situation. The separatist movements, according to most observers, “received powerful reinforcements in the form of a huge number of weapons and secretly introduced Russian troops. " Bloodshed continues to this day. 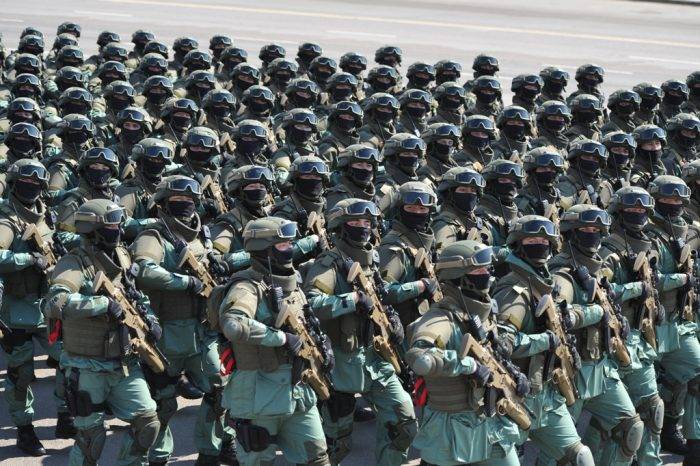 Allies or "time game"?
Although these events worried Kazakhstan, it formally remains a firm ally of the Kremlin. But, according to political commentator Ruslan Zhangazy, Astana could thus simply try to gain time.

“We showed caution and did not accept our [new military doctrine] immediately after the Russian military aggression, that is, during the period of the most acute conflict. We waited until attempts were made to achieve a peaceful settlement of the conflict, ”Zhangazy said.

In the 2014 year, when Astana was already concerned about the fate of the Crimea, Russian President Vladimir Putin added fuel to the fire, calling Kazakhstan "a territory in which there was never a state." “The Kazakhs never had statehood. He (Nursultan Nazarbayev) created it, ”Putin said. Many have taken this statement as a warning to Kazakhstan not to show too much diplomatic independence.
The words of the Russian leader have caused a wave of nationalist rhetoric in Kazakhstan and increased efforts to raise the status of the Kazakh language,
also fueled by the demographic situation in the northern regions of the country, where it is believed that the risk of separatism is highest.

"Demographics as a trump card"
According to state statistics, in Petropavlovsk, the administrative center of North Kazakhstan region, the share of ethnic Kazakhs is only 27,6%. In Kostanay, this figure reaches 37,5%. In Oskemen, the capital of East Kazakhstan region - 40,6%, and in Pavlodar - 44,5%. In the industrial cities in the north and east of the country, including Rudny, Lisakovsk and Ridder, the share of Kazakhs is 28,4%, 24,8% and 13,9%, respectively.
But the composition of the population of Kazakhstan is undergoing significant changes.
On the one hand, the growing rate of external migration is primarily due to the departure of ethnic Russians in historical homeland. At the same time, the government of Kazakhstan is actively resettling ethnic Kazakhs from the southern regions to the north. The stated goal of such a policy is to get rid of surplus labor in the south and support the economic potential of the north. Those wishing to relocate are offered privileges and mortgages on favorable terms.

Demographics may be the strongest card in the deck of Kazakhstan, since, although the country's strategic positions are changing, the country's military spending is in an anemic state.

Just a safety net
According to the analytical center Ranking.kz, in 2016, the defense budget of Kazakhstan decreased by 3% compared with the previous year. And this is despite the fact that the budget is calculated in tenge, the rate of which has fallen sharply over the past two years. Moreover, as reported by Ranking.kz in February, defense spending last year amounted to 440 billion tenge (1,3 billion dollars at the current exchange rate), and this year will fall to 408 billion tenge (1,2 billion dollars).

In general, Kazakhstan cannot turn its back on Russia and is still closely associated with its northern neighbor in economic terms, as well as in terms of security. Against this background, the adoption of a more defensive military doctrine is more like a safety net, rather than a radical change in course.

“Kazakhstan is a member of the CSTO, maintaining a high level of cooperation with Russia through the CSTO and on a bilateral basis,” said Tynan. “By strengthening relations, Astana hopes that these agreements will keep Russia in check and position Kazakhstan as an equal partner, not like Ukraine.”

Ctrl Enter
Noticed oshЫbku Highlight text and press. Ctrl + Enter
We are
A great interview with Sergey Lavrov: about Ukraine, Obama and IranWhat you didn't want to know about England
Military Reviewin Yandex News
Military Reviewin Google News
102 comments
Information
Dear reader, to leave comments on the publication, you must to register.