The spans of the Crimean bridge connected with the arch

December 13 2017
76
The builders completed the assembly of spans of the road part of the bridge across the Kerch Strait in the second sea section - between Tuzla Island and the fairway, the Crimean Bridge information center reported. 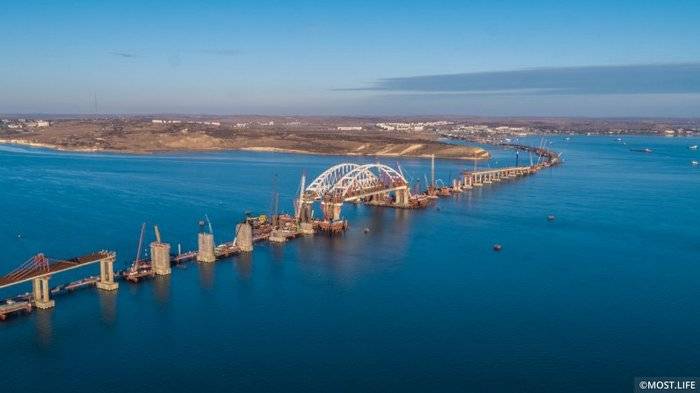 They noted that the assembly of the spans between the island of Tuzla and the fairway was completed. In late December, similar work will be performed on the last offshore section - from the fairway to the Kerch coast.

The first to reach the arch were the spans, which in the future will organize the movement from the Crimea to Taman. In the course of the next day, the sliding of the second axis will be completed - the spans along which the cars will travel in the opposite direction.

In general, the length of the "thread" of metal structures is more than two kilometers, in this section it is stretched between the 33 supports. Its total mass is about 20 thousand tons. The construction of the bridge spans here was carried out since February 2017, by the method of longitudinal sliding.

The bridge should connect the coast of Crimea and Taman by the end of the year. It will be the longest in Russia - its length will be 19 kilometers. Car start is scheduled for December 2018, trains - for December 2019

Ctrl Enter
Noticed oshЫbku Highlight text and press. Ctrl + Enter
We are
Installation of spans of the automobile part of the Crimean bridge will be completed before the end of the year.Ukrainian hysteria breaks about the truth of life
76 comments
Information
Dear reader, to leave comments on the publication, you must to register.