What is the future for the country preparing a modern education system?

December 14 2017
272
Often on the pages of "Military Review" through the prism of national security we discuss issues related to the modern education system. Many readers ignore topics of this nature, guided by the thesis, “Why is it on HE?” - “Education is for the educational portals, for Military Review, this is a military topic, and that’s the point.” And literally through several topics in the “neighboring” branches, fellow citizens who sincerely believe that the education system is not worthy of attention here, for some reason, are suddenly surprised by users who are not able to keep talking about the technical aspects of modern weaponsare lost in matters of domestic stories, lead pseudocytes, extricated from the fake bins "Google". Even more surprised when individual users, instead of reasoned discussion of a particular topic, try to cheat or “tune” rating points on the comments from the series: “We all tear!”, “It’s the damn Americans to blame (Jews / Germans / Ukrainians)!” And so on. the same series.


In fact, it is the educational system that will allow to answer the question, which way will the state go tomorrow. It is the education system that determines the principles of not only vocational orientation, but also the fact that INSIDE a “professionally oriented” person is consumer grip from the “Hurray, I am the first in line for iPhone” category, or does the understanding that citizenship is not determined position in the queue or rating "Forbes".

So, what kind of educational system was built in the last quarter of a century? What are the first fruits of this construction, which looks like a chaotic modern multi-voiced Babylon?

In fact, despite the seemingly chaotic sequence of educational reforms, they have an unambiguous “general line”. And this line consists in a clear rejection of any hint of a society of social justice. And it is covered under the most plausible excuses, poured over the most vivid and remarkably smelling sauces.

Here are a few:
We need to cultivate an individual approach so that the school releases a free, developed person, and not a blinkered future army unit, accepting only orders.

We need progressive systems of testing and other controls so that children even from the provinces become students of prestigious universities.

We need effective managers (managers) who can increase labor productivity in the country to an unprecedented level.
Everything is great, beautiful, sharp, but not one iota does not correspond to modern reality.

From a young age, a child receives an informational message that his success largely depends on the financial success of his parents. There are funds from parents - take part in countless profanations in the form of various paid (more often distance) Olympiads, get beautiful forms with beautiful seals from “Horns and hoofs” - enclose it in a portfolio (a very fashionable little word) and become a successful student. There are means - tablets, computers, smartphones, printers, the ability to go on paid excursions - again, success. And if the parents did not come out with faces (wallets) and cannot afford to send their children to the paid competition of young mathematicians to the city of “Fools”, then sit, student, and do not count on success in this democratic life. 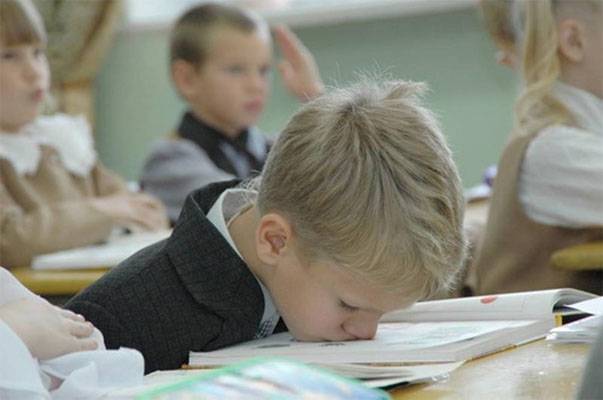 In this system, not only the student becomes a hostage, but also the teacher. GEFs, KIMs, KOSy, OPOPy. The person who received education in order to train and educate the younger generation, today was caught up in papers, bureaucratic norms that turn teachers into a biorobot. Reports and reports again kill the time that could be spent on a direct dialogue with those who sit at their desks, to educate the teacher. The teacher more often sees in front of him ridiculous forms from the Department of Education, all kinds of checkers of his professional activities, rather than the eyes of children.

In this regard, it is strange to talk about why modern children suddenly lose interest in education as a process ... They lose interest in education precisely because the education system stopped noticing them, lost all interest in them. The main thing for the system is to serve before the inspection structures, of which there is darkness for one average school. The main thing is to show on paper a report on how many points on the Unified State Examination students of graduate classes scored - on average - regardless of the fact that those who scored the maximum number of points were forced to spend more time with tutors than at school. And who prepared the child for the exam - a public school or parents' funds, which (parents) actually pay taxes so that the public school works ... And if the parents don’t have the means to take private lessons for the child - at whose expense government structures are going to hang his possible low score on the exam? Or is it now time for everyone to become successful to go to private educational structures? If there is enough money ...

Education officials are not ready to give a clear answer to these questions. Still would. They find it easier to hide behind the initiatives of the president, who often frankly descend on the brakes. It’s simpler than to answer unambiguously: what kind of “product” of the educational system is the state, after all, ready to see after all these liberal reforms. For now, the product is a frank “color differentiation of pants”, with clarification at the school desk how many times and before whom you need to sit with a bell in your nose ...

On the modern education system - a great film by Konstantin Semin "The Last Bell."

Ctrl Enter
Noticed oshЫbku Highlight text and press. Ctrl + Enter
We are
Situational analysis of the death of the MH17 flight (Malaysian Boeing 777), made on the basis of engineering analysis from 15.08.2014Results of the week. “In our cooperative, the board is always agreed”
Military Reviewin Yandex News
Military Reviewin Google News
272 comments
Information
Dear reader, to leave comments on the publication, you must sign in.