December 13 2017
18
The Rosselectronics holding of Rostec State Corporation will deliver a large batch of command and staff vehicles (KSHM) in the interests of Rosgvardia in 2018, the press service of the holding reported to the Military Outlook says.


As reported in the state corporation, the relevant contract has already been signed by the parties. The supplier is the leading enterprise of the Constellation Concern Rosselektroniki, JSC Ryazan Radio Factory. 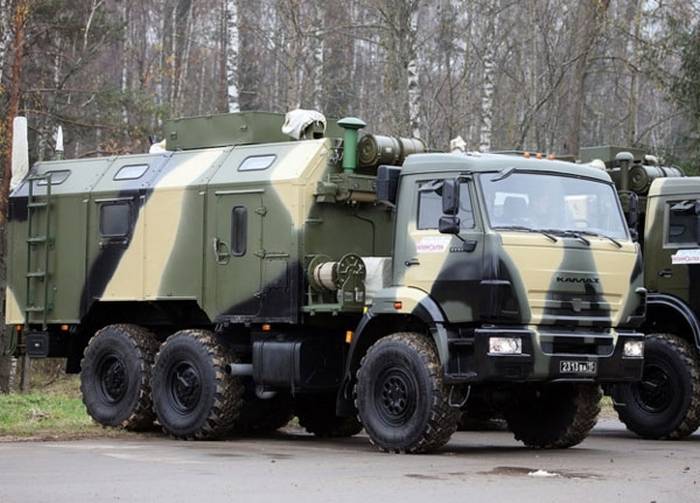 It is noted that the command-staff machines KSHM P-142NSA-R are intended for the organization of field radio communication nodes and ensure the integration of several telecommunication systems into a single information space. The KSHM radio equipment is mounted in the body of the van on the KAMAZ chassis and ensures the operation of the communication equipment both in the parking lot and in motion. Crew - 5 man. One of the advantages of KSHM P-142NAA-P is the absence of light unmasking signs at night.

At the same time, JSC Ryazan Radio Plant began production of sets of equipment for operational testing of the KSHM radio stations. The first copies have already arrived in test operation. The main part of the sets are multi-channel software and hardware complexes that allow you to simultaneously check up to eight transceivers of various types. In particular, the apparatus provides performance monitoring radios manufactured by companies Concern "Constellation" P-168-25U-2, P-168-100U-2, P-168-5KV, P-168-100KB, P-168 MPA P -612-18. The equipment is designed for all types of signal modulation and control systems used in existing radio stations. The operating frequency range is from 1 MHz to 2 GHz. In this case, fault analysis can be carried out both in stationary and field conditions.

Software systems developed on the basis of the operating system Astra Linux, approved for use in special equipment. It has a modular structure that allows you to quickly introduce new products into the inspection cycle.

According to the results of 2016-2017, the Concern "Constellation" ensured the early execution of contracts for the supply of crankshafts for the needs of the Ministry of Defense, the Federal Security Service of the Russian Federation and the Rosguards.