December 13 2017
22
The issue of arranging military burials under Lithuanian law is in the competence of local authorities, therefore the Russian side should conduct a dialogue on this topic with municipalities. This was announced by Lithuanian Culture Minister Liana Ruokite-Jonsson on December 12 at a meeting with Russian Ambassador Alexander Udaltsov, the ministry’s press service reported.

The arrangement of burials is regulated by legal acts and is the exclusive right of local governments, therefore these issues should be resolved through friendly agreements with local governments
- noted the head of the department. 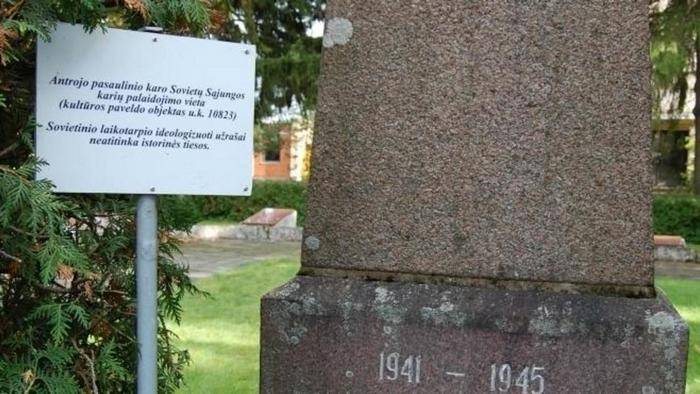 Ruokite-Jonson recalled that the program of cooperation in the field of culture ended in 2014, and the signing of the new document was delayed. Up to now, the arrangement of the burial places of Soviet soldiers in Lithuania, which the Russian side actively assists, has been carried out on the basis of the Improvement Rules for the immovable cultural heritage significant for foreign states, which are approved by the Minister of Culture, Sputnik Lithuania.

In November, a scandal erupted around the reburial of the remains of Soviet soldiers in the Vilnius Antakalnis cemetery. The Lithuanian Department of Cultural Heritage stated that the monument on the grave contained Soviet symbols, and the reburial was not fully agreed with the Ministry of Culture.

In October, information appeared in the Lithuanian media that the administration of the Birziai region of Lithuania in the places of burial of Soviet soldiers on their own initiative installed signs indicating that the inscriptions on the monuments allegedly did not match "historical the truth. "The Russian Embassy in the Republic called the installation of the plates" an infamous act. "
Ctrl Enter
Noticed oshЫbku Highlight text and press. Ctrl + Enter
We are
Military Reviewin Yandex News
Military Reviewin Google News
22 comments
Information
Dear reader, to leave comments on the publication, you must sign in.