December 13 2017
14
The representative of the Russian Ministry of Defense in the working group on security issues of the Tripartite Contact Group for Conflict Resolution in the south-east of Ukraine, Colonel Andrei Korotkov, said that the Ukrainian authorities created "openly discriminatory" working conditions for the Russian participants in the Donbass conflict resolution working group. Visits to monitor the situation are made as difficult as possible, participation in events is blocked and even go out into the street is allowed only "under guard". 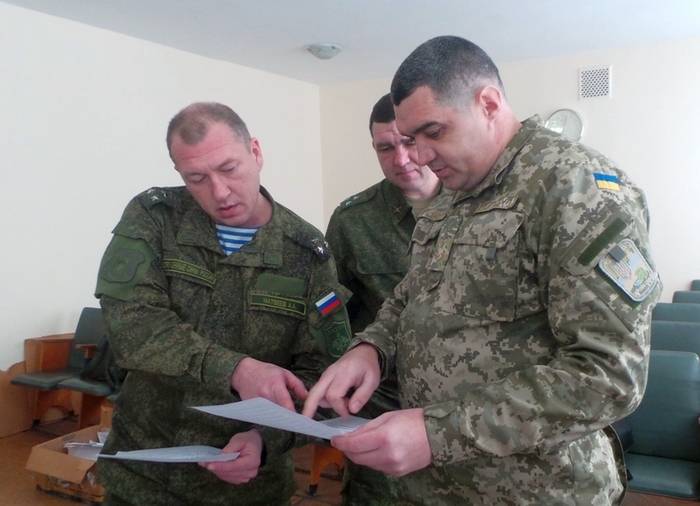 During the last months, the conditions of stay on the territory of Ukraine of Russian officers from the Joint Center for Control and Coordination of the issues of the cease-fire regime and the stabilization of the situation (JCC) by the efforts of the Ukrainian side have become much more complicated
- stated the colonel.

According to him, they are "already openly discriminatory in nature" and concern not only the fulfillment by Russian officers of their duties under the JCCC, but also questions of basic life activity.

For example, according to the regulations approved by the Ukrainian leader of the JCCC, freedom of movement of the Russian military around the building in Soledar, in which they work and live, is limited to the maximum, Korotkov noted.

It should be noted that the Kiev authorities regularly sabotage the work of the Joint Control and Co-ordination Center, said earlier Russian Foreign Minister Sergey Lavrov. He noted that personally the Ukrainian President Poroshenko is doing everything possible to make the stay of Russian officers at the Center unbearable.

Kiev, Lavrov stressed, is interested in having the Center stop its work, but for now it was not possible to achieve this, the Ukrainian authorities are doing everything necessary to turn it into a non-functioning structure.

Ctrl Enter
Noticed oshЫbku Highlight text and press. Ctrl + Enter
We are
Reports from the militia of New Russia for 27-28 September 2014 of the year
Military Reviewin Yandex News
Military Reviewin Google News
14 comments
Information
Dear reader, to leave comments on the publication, you must to register.