December 13 2017
3
Aircraft MiG-29MT returned to Astrakhan region from Syria, where they successfully coped with their tasks, according to the Department of Information and Mass Communications of the Ministry of Defense of the Russian Federation.

Crews of fighters MiG-29SMT returned to the airfield of permanent basing in the Astrakhan region. The pilots performed the flight from Hmeimim airfield after successfully completing tasks on the territory of the Syrian Arab Republic
- said in a statement 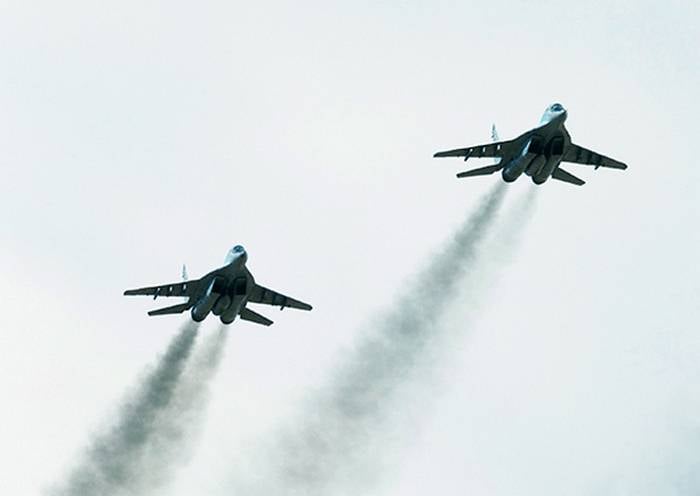 Lieutenant-General Sergei Dronov, deputy commander-in-chief of the Aerospace Forces, representatives of the Yunarmiya All-Russian Children's and Youth Military-Patriotic Social Movement, veterans' organizations, colleagues, relatives and members of the families of the arriving servicemen took part in the celebrations to mark the crew’s arrival.

Today, pilots, engineering specialists returned to their native landaviation services completing the task of destroying the forces of international terrorism in the territory of the Syrian Arab Republic
- said lieutenant general Sergey Dronov
Our country in a short time created in Syria a small in number, but very effective grouping of aerospace forces, which provided a radical change in the current situation. The whole world was able to make sure that the Russian weapons and equipment are among the best in the world, and the professional skill and morale of the Russian military are at the height

Zamgolkoma VKS added that the experience of hostilities in Syria will be in demand with further training in all types of aviation.

Ctrl Enter
Noticed oshЫbku Highlight text and press. Ctrl + Enter
We are
Unarmeytsy visited the MiG Corporation aircraft manufacturing plant in Lukhovitsy on the eve of MAKS-2017More than 8 thousands of young men will take part in parades and processions on Victory Day
Military Reviewin Yandex News
Military Reviewin Google News
3 comments
Information
Dear reader, to leave comments on the publication, you must to register.