Find and destroy: Warrior's electronic glasses were tested with a combat robot

December 13 2017
20
Electronic glasses, which in the near future will be included in the Russian combat equipment "Warrior", experienced with a robot intelligence officer. This was told by Dmitry Semizorov, general director of the Moscow-based TsNIITOCHMASH, where the “Warrior” was created and improved.

The electronic information "Warrior" displays additional information: control signals, map of the area, aiming mark weapons.
- The task is not to show what the sight sees, but to indicate the point where the bullet or projectile will fly when fired. That is, distance to the target, wind speed and other parameters are taken into account.
- quotes Semizorov Tass. 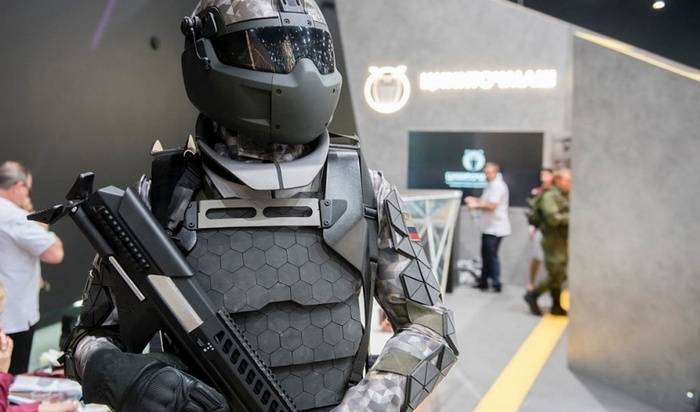 Points were tested with a combat robot at the test site. The machine inspected the field, found the target and placed an aiming mark on it. The picture with the sight was projected on the glasses of the soldier who was in the shelter. The man gave the command to open fire and the robot hit the target.

There are already samples of personal small arms with an aiming system that displays the image on the glasses. They also work
- added Semizorov.

The main purpose of the glasses - the preservation of the life of a soldier - he does not need to lean out of the shelter to look at the scope. You can shoot from around the corner.

The transition from the current "Warrior" to the equipment of the next generation will be gradual, with the addition and partial replacement of elements, said the head of TsNIITOCHMASH. Some new items will appear soon. So in the "Warrior" may be included biomedical sensors. Designed shoes that protect the soldier from anti-personnel mines.

It is only necessary to bring it to mind, make it more ergonomic, comfortable and easy. So far shoes have hefty soles and heels.
- told the agency interlocutor. In the future, mine detection sensors can also be built into such boots, and the outfit itself can be equipped with means to suppress them.

Ctrl Enter
Noticed oshЫbku Highlight text and press. Ctrl + Enter
We are
Russian third-generation combat equipment will receive fundamentally new materialsCombat gear "Warrior" on the way
20 comments
Information
Dear reader, to leave comments on the publication, you must to register.