December 21 2017
36
Some time ago, an article on new types of bullets for submachine guns with a sharp edge appeared on the VO. Spinning in a shaped barrel, such a bullet could, in principle, inflict a very strong defeat at close range, and more from a submachine gun is not required. Of course, this is just an assumption and nothing more. It is interesting, however, that there was a time when projectiles in the form of a disk were seriously considered by artillerymen from different countries of the world, including Russia, as a real replacement for spherical and even cylindroconical projectiles. 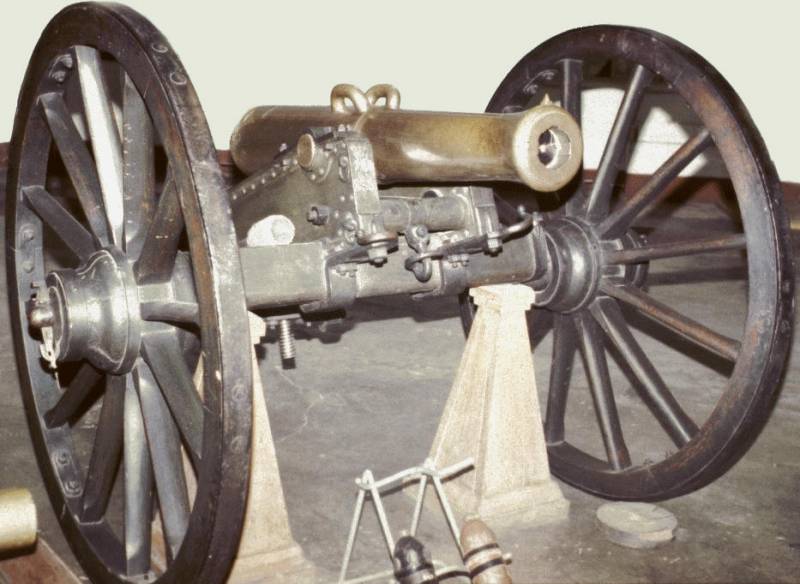 And it was so that the experience of the Crimean War showed to the whole world that the range of fire of field artillery is too small, and that the fire from rifled guns makes it possible to hit artillerymen who were in artillery positions even behind the battle formations of their infantry. All this required the development of not only new types of rifled small weapons, but also artillery systems of increased range. 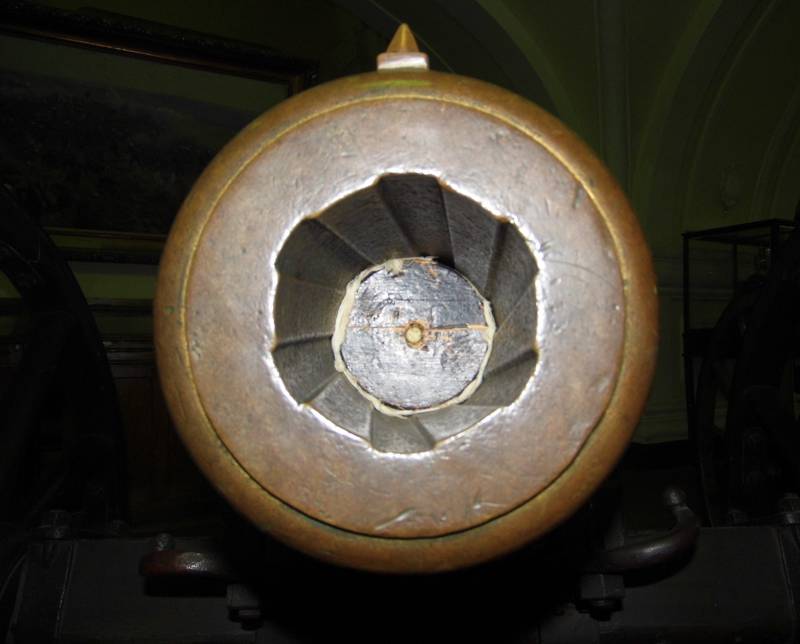 The barrel of the muzzle-loading bronze cannon.

Another unpleasant discovery was the armor, which began to sheathe wooden warships. The ball bombs of Peksan’s guns bounced off this armor, but even if they exploded from hitting it, they could not penetrate anyway. They tried to increase the impact force of the guns by increasing the caliber to 508-mm, but such guns for the ships turned out to be excessively heavy.

It seemed to be the easiest to modernize (that is, to convert into rifled) old bronze cannons, since cast iron ones were not suitable for this purpose. That is, the principle of manufacturing the barrel remained old, charging too, but the presence of rifling allowed to increase the firing range and the destructive power of new projectiles to these guns. In Russia, for example, already in 1858, a four-pound (86,8 mm) gun was designed, with a traditional bronze barrel, which, however, had six rifles inside. For this instrument Professor N.V. Maievsky developed an original cast-iron grenade weighing 4,6 kg, on the case of which zinc projections were made, which entered into grooves inside the barrel during loading. At the head of the projectile was a copper shock tube, instantly ignited the explosive charge in the projectile when it hit the target. Well, and the projectile, moving in the barrel and at the same time rotating, continued to rotate after its departure from the barrel. This achieved greater accuracy of shooting. Its range was twice as high as that of a smooth-bore gun of the same caliber; the mass of the projectile and the amount of the explosive contained in it were higher. 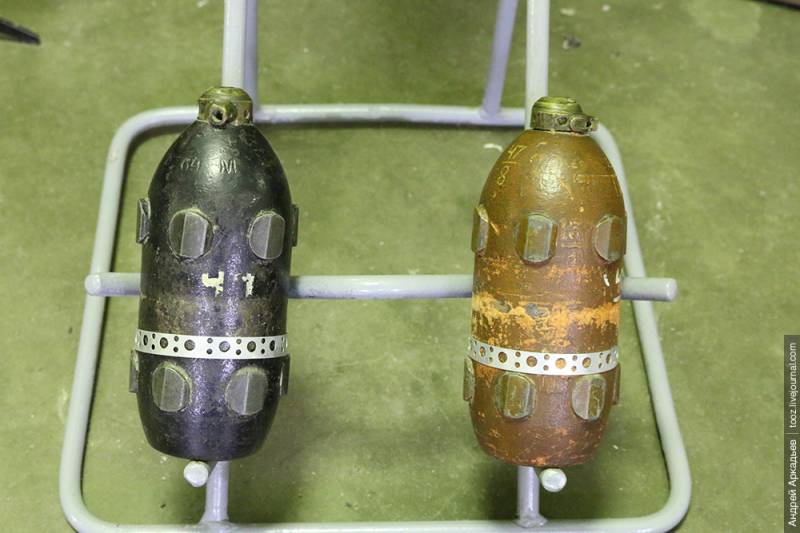 The drawback of the gun was the reduced rate of fire, since the projectile had to be advanced into the barrel along the rifling, that is, rotated over the entire length of the barrel. Part of the powder gases when firing still broke through into the gaps between the zinc protrusions and the walls of the barrel, which caused the projectile to oscillate and reflected in the accuracy. But soon Maievsky designed breech-loading rifled field guns with bronze barrels and wedge gates 9-pound (107 mm) and 4-pound caliber, cast iron shells to which had many small cuts and an external (on top of the cast-iron!) Lead sheath. The breakthrough of gases was thus eliminated. 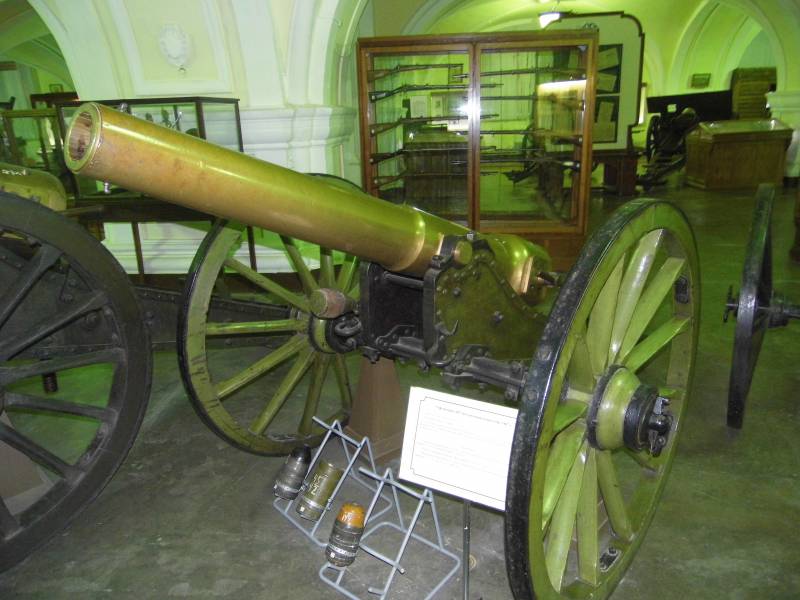 However, Prof. Mayevsky was also interested in other ways to increase the penetrating power and firing range of artillery guns. For example, it could be a disc-shaped projectiles fired from guns with a special bore. By this time they were engaged in the same England, Belgium, here in Russia, and in Italy. For example, in his special study on discal shells, launched in 1857, the Italian artilleryman Saint-Robert proposed several ways to make disc shells rotate: for example, a disc shell with a lead belt around the circumference could cut into the notch teeth (like a toothed rack), and when moving along such a channel, and encountering a greater resistance from above than below, would receive the required rotation; 2) the flat parts of the projectile surface have a protrusion on a common axis, and on the side walls of the elliptical canal there are two notches for these protrusions, moving along which the projectile would roll along the bore, and 3) and, finally, the most original proposal was the barrel with smooth elliptical channel, curved in the form of an arc! When fired from such an “arc trunk”, the centrifugal force would press the projectile against its upper part, and it would roll along it, and end up with the desired rotation. 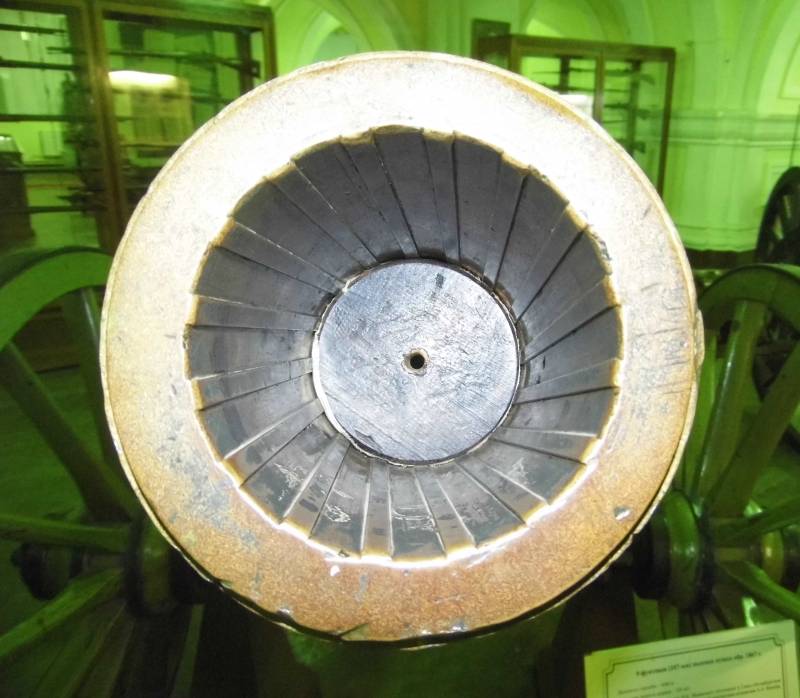 Separate experiments were seemingly very comforting properties. For example, the projectile of the Belgian artilleryman Puyt with a weight of about eight pounds made it possible to get a range of up to 1.250 fathoms (1 fathom - 2.13 m), while the usual core of the same caliber and weight could not shoot further than 250 fathoms. At a distance of 100 fathoms such a projectile punched a frame from a double row of bars ten inches thick. 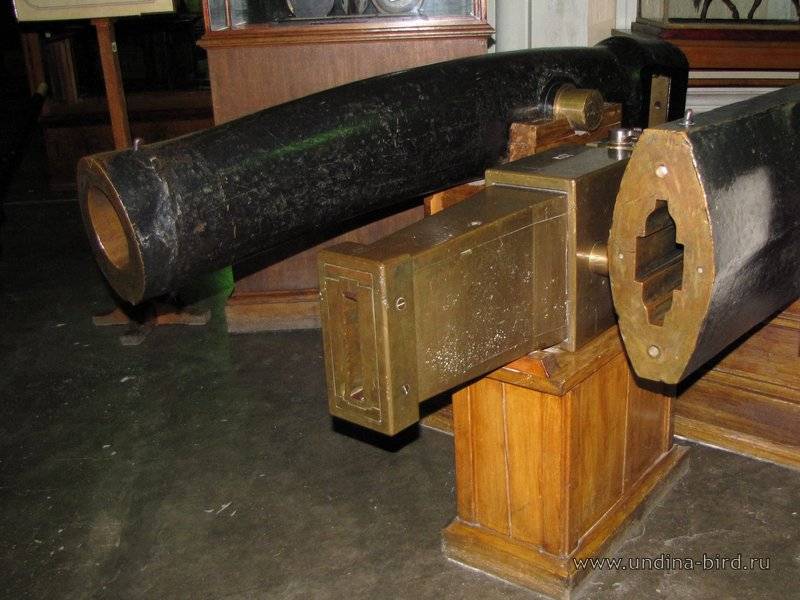 Diskettes guns from the Artillery Museum in St. Petersburg. Left - N.V. Maievsky, in the center - A.I. Plestsov and on the right - A.A. Andrianova.

Obviously wanting to test all this in practice, Professor Mayevsky in 1868 offered a gun with a barrel bent upwards, in which the projectile disk would get rotated due to centrifugal force. The shooting carried out in 1871 — 1873 has confirmed that the calculations are correct: a disk projectile weighing 3,5 kg, with a speed of 480 m / s, was able to fly 2500 m, whereas as a normal core of similar weight of all 500 m. 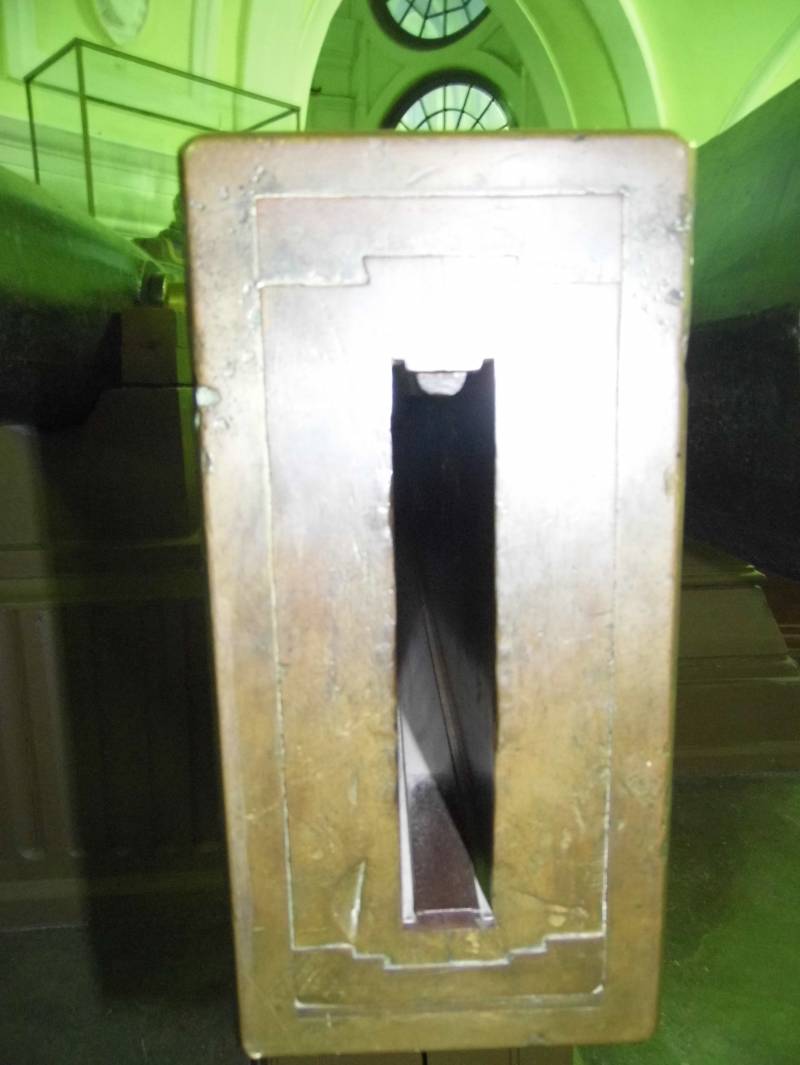 A.I. Plestsov and I.V. Meat eaters offered to tighten the disk shell with a rack in the upper part of the barrel. On the projectile, a lead band was provided for this at the end. They had a shell and "rolled" on this rail, and from this, and then rotated. 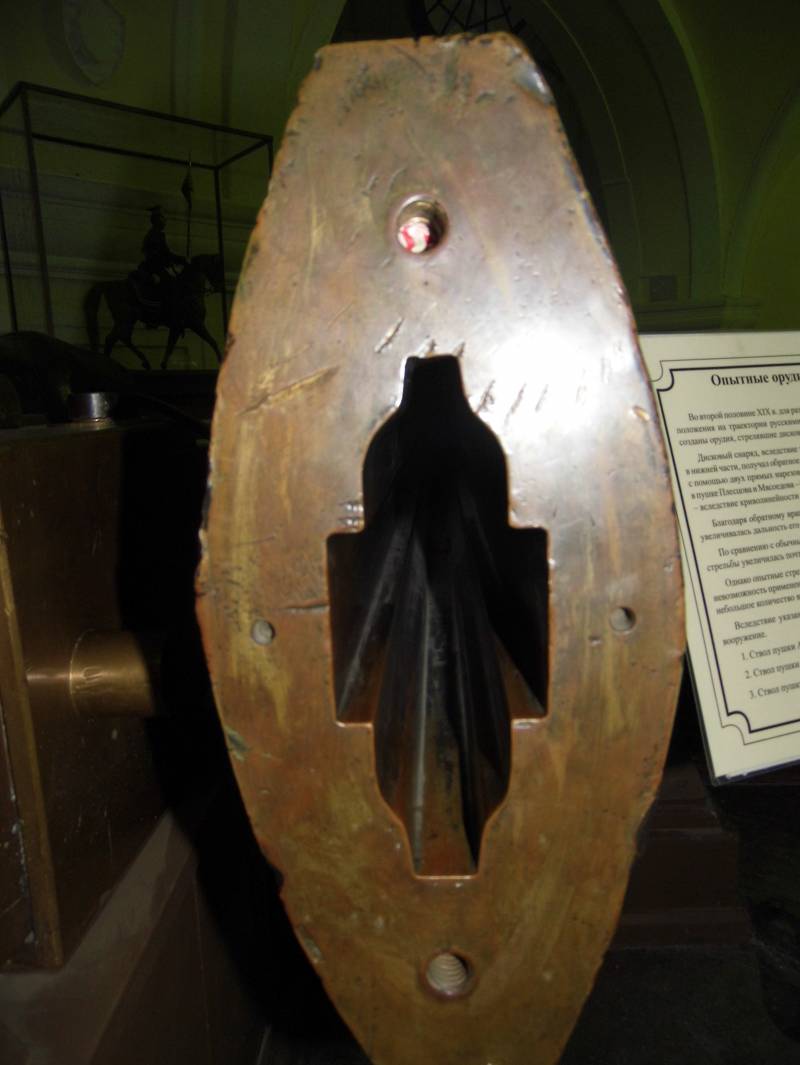 A.A. gun Andrianov had no rake. She had straight rifling: a narrower in the upper part of the barrel, but wider - in its lower part, because of which he braked in the upper part and began to turn. Interestingly, all of these tools, proposed by our designers, were breech-loading, had modern wedge closures, but were still cast in bronze. Steel trunks at the time did not work yet. 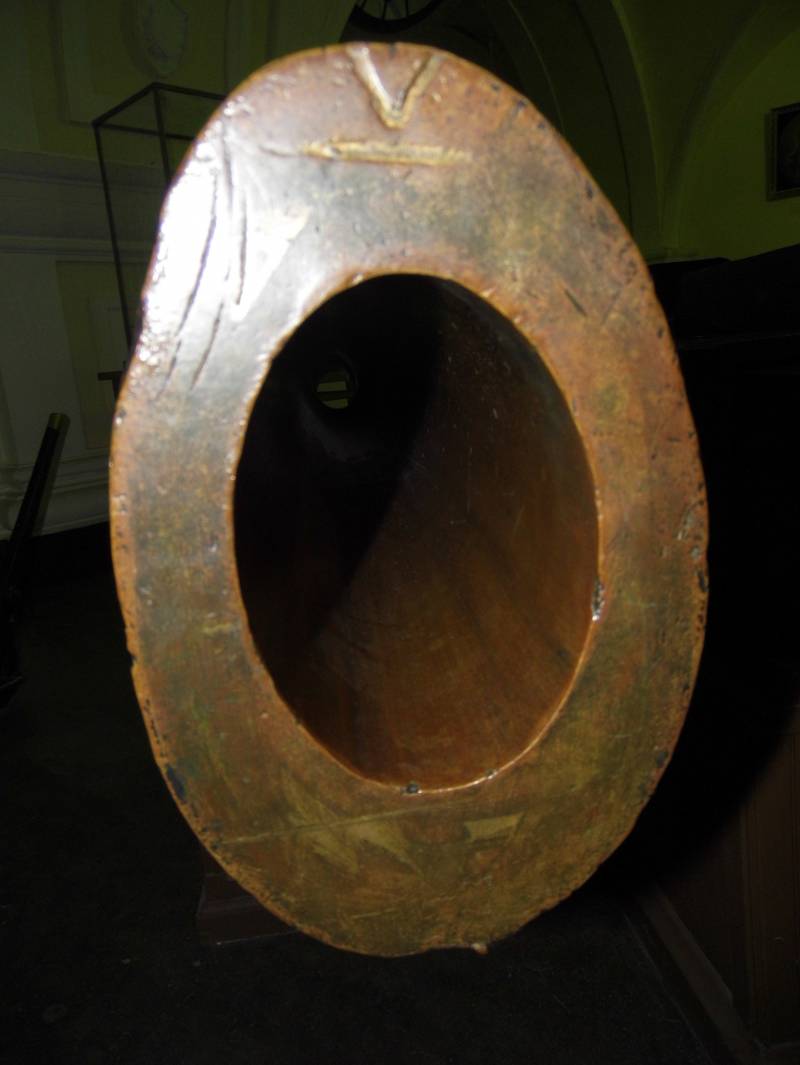 That is, there were several systems of guns that fired discoid shells. What, as it turned out, was good and bad in them? Firstly, the range was good, and secondly, it turned out that at certain angles, the discoid projectile on the final segment of the trajectory can move like a boomerang - “slightly backward”, that is, it allows the troops to be fired behind the walls and on the opposite slopes of the ravines! But there were also serious disadvantages, the main of which was the spread of the trajectories of the flight of the disc-shells. It affected a lot of factors, which designers were unable to change. For example, wind, atmospheric pressure, and uniformity in the production of ammunition at that time was very difficult to achieve. But that which was naturally compensated in rifled implements for cylindrical shells could not be compensated in the “diskettes”. Or, for example, such a question and question is very important, like placing a explosive charge and a fuse in a disk-shell. In any case, due to its shape in such projectiles, the bursting charge was even less than in a spherical one. And where in it could put a shock fuse? That is, it was impossible in principle, not to mention the fact that such a weapon could not shoot either grapeshot or shrapnel, and these for the type of projectiles were most widely used in artillery at that time. 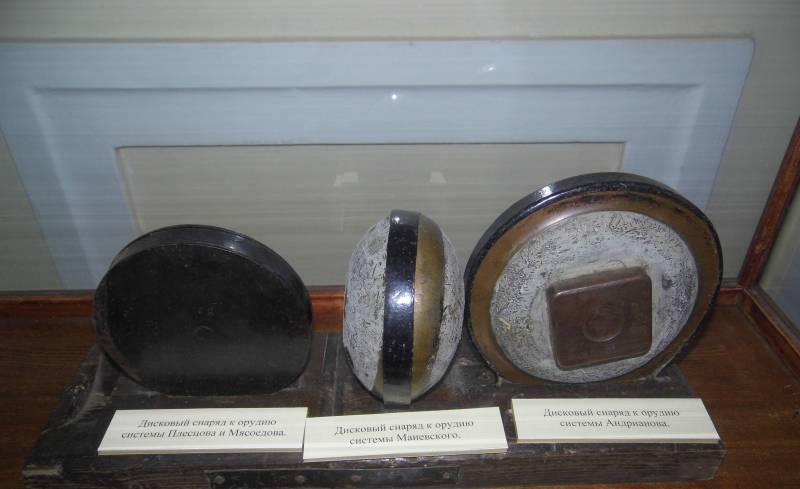 The last attempt to create a thrower for discoids in Russia was made in the 1910 year, but it also failed due to the inability to get any satisfactory accuracy of shooting at long distances.

P.S. The author and the site administration are grateful to N. Mikhailov for providing photos from the St. Petersburg Artillery Museum.