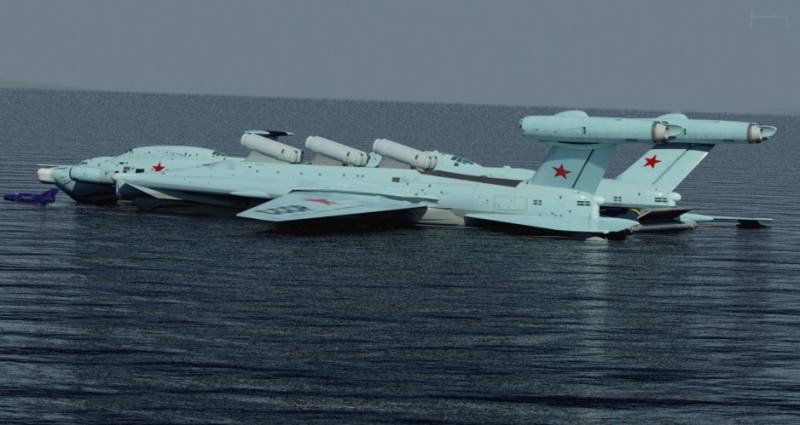 Shipbuilding engineer Vladimir Yatskov proposes to return to the development of aircraft-carrying ground effect vehicles. The idea looks very attractive - the fleet receives an unsinkable aircraft carrier that can move at a speed of around 300 nodes. What is alarming?

On the ship with a take-off weight of 16-18 thousand tons, it is planned to place more than two dozen aircraft. But let’s recall the modern small aircraft carriers of a similar or even greater displacement: the English “Illastries” (now withdrawn from the British fleet), the Italian "Giuseppe Garibaldi" and the like ("Book of problems for an aircraft carrier", "military-industrial complex" No. 1, 2017). They carried a total of 8-12 aircraft. And these are displacement ships, the volume of the internal premises of which significantly exceeds the similar E-plan in similar take-off weight. Therefore, in the best case, 4-6 modern combat aircraft can be placed on such an aircraft carrier. This is too little for a ship like Goodbye Montana to have significant operational value. In any case, the combat capabilities of its air wing cannot be compared with the power of the air group of a classic aircraft carrier, say, project 1143.5, where from 65 aircraft to 36 are military aircraft.

Pay attention to the power plant superE-plan. The author measures its potential in megawatts. Meanwhile, it is more appropriate to take into account the engine thrust indicator, since, although the ekranoplane belongs to a specific class of ships, in essence it is closer to seaplanes. In this case, the key index determining the possibility of its separation from water is the specific thrust-to-weight ratio — the ratio of the maximum total thrust of all engines of the vessel to its take-off weight. For existing E-plans, it ranges from 0,23 to 0,28. Although on the cruise flight can be 0,09-0,11. On the basis of these data, we estimate the required total thrust of the power plant of an airplane.

The aircraft engines available today in take-off mode (in particular, in the afterburner) develop thrust of the order of 30 tons. Note that it has not grown too much over the past two decades, so the most heavy aircraft have four, or even six, like the An-225, engines. The Americans put eight motors on the famous B-52 bomber. In the medium term, it is unlikely that an engine with more than 40 tons will appear on the take-off afterburner and 20 tons - on the cruise. Even these numbers seem fantastic today. Nevertheless, we take them as the basis for further calculations. Based on such a predicted thrust of one engine, it is easy to determine their number for WIG of various take-off weight.

That is, it will be necessary to place more than 130 engines on the ekranoplan-aircraft carrier, each with a load that is not quite attainable today. And, if we assume that in the take-off mode, special launch rocket engines can be used, which have a particularly large load, in addition to the main engines, the required amount of the ultimate - more than 100. Where to place the motors on a relatively small surface of an e-plan of the type of a rectangular monocry 250 meters long? After all, they must be installed within the same tier, otherwise they will create mutual interference. I'm not talking about the problems associated with the simultaneous use in flight of such a large number of engines. We recognize that in reality, no more than 15-20 engines can be installed on the wing, which corresponds to the maximum take-off weight of the vessel up to 3000 tons.