They took a cushy 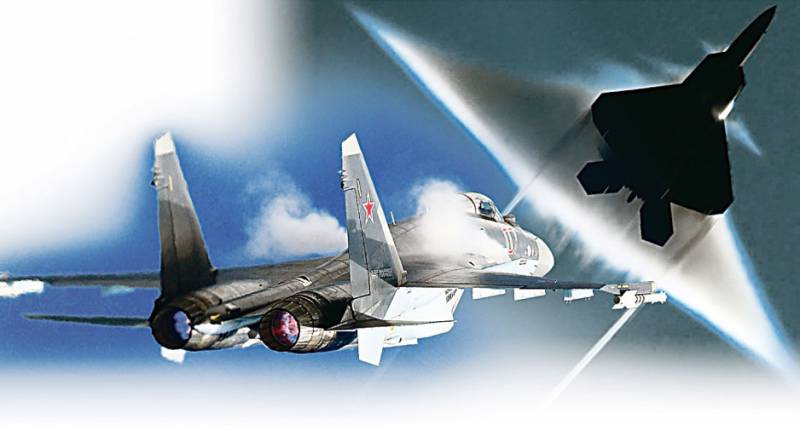 November 23 in the sky over Syria, a landmark event occurred not only from a political but also from a military point of view. Faced the Russian and American concept of creating equipment for air combat.

On this day, the Su-25 attack aircraft of the Russian Aerospace Forces struck the positions of militants in the Meyadin area. Suddenly, the US Air Force F-22 fighter intervened in our aircraft. "Raptor" dangerously maneuvered, released heat traps. After some time, as specified in the Russian Ministry of Defense, the American pilot began to produce brake flaps with constant maneuvering, simulating an air battle. In response, the Russian command sent the Su-25 fighter to the Su-22 and F-35 confrontation area. His appearance for the American side was very unexpected. F-22 increased speed and retired from Syrian airspace to Iraq.

Officially, only the December 9 reported the incident to the Russian Ministry of Defense. The reason was the accusation by the Pentagon that our combat aircraft dangerously approaching American machines in the sky of Syria. Meanwhile, reports of the Rook and Raptor maneuvers have long appeared on several American and Arab online resources. Until 9 December, these sources were not taken seriously, but now the information was confirmed by the Ministry of Defense of the Russian Federation.

This caused a storm in the Western, especially in the American media. Respected aviation resource The Aviationist has published a large article on the analysis of what happened. True, most foreign experts and journalists took the path of least resistance. And they wrote off everything to the next fake from the Russian Ministry of Defense. Fortunately, in recent years, our military department itself has been giving trump cards to the Western media.

Especially caustic comments received the fact that the Su-35 was able to scare and drive away the F-22. Still, "thirty-fifth" from the generation of "4 ++", and the American "Raptor" - from the fifth. And according to Western journalists, the F-22 is clearly superior to the Russian fighter. But some analysts and experts, reluctantly, recognized that in this situation, the Su-35 was a real threat to the Raptor. Moreover, the experts of The Avionist blog conducted a fairly thorough study of the capabilities of the F-22 and the "thirty-fifth", concluding that the Su-35 had very high chances to bring down the Raptor. True, the authors later seriously edited the article, removing the entire comparison of the two fighters and leaving only the description of the incident. What happened in the sky over the Syrian Meyadin.

Crowd in the syrian sky

This is not the first collision of American and Russian combat aircraft. In the summer of 2016, the aircraft of the Russian Aerospace Forces, allegedly Su-34, worked on the basis of the IG (banned in Russia) near the Jordanian border. The object was used by the United States and Great Britain to train moderate opposition, and shortly before our raid, there were about 30 special forces of her royal majesty.

American F-18 fighters were retargeted to the collision area. Getting close to the Russian aircraft, they made it clear that ours were bombing the wrong target, after which the Su-34 left the zone. The clash caused quite a violent reaction in the United States. But the Russian Defense Ministry said that the incident was not.

Reports of air incidents between the US allies in the anti-Igilov coalition and the Russian Aerospace Forces appeared a few more times. In particular, the German media published videos and photographs of how aircraft similar to the Su-35 escorted a Luftwaffe Tornado fighter bomber in an reconnaissance flight in Syrian airspace. Some time later, the Pentagon posted a video shot by F-18: American deckers escorted Russian Su-35 to the Syrian sky. 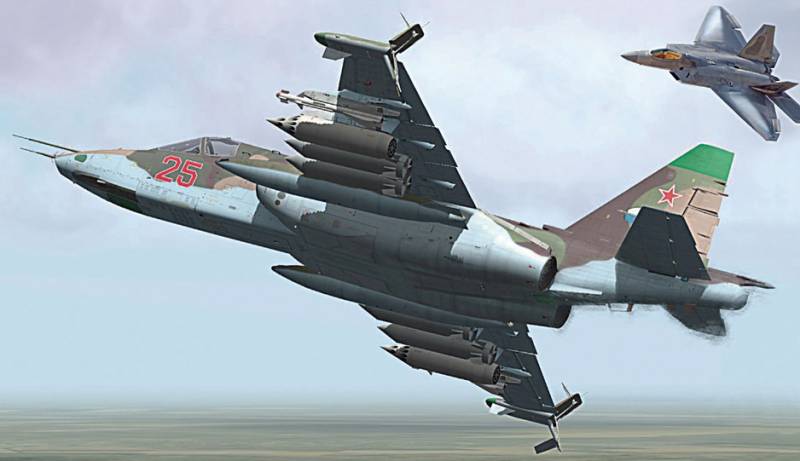 What is the reason for such activity in the opposition of the Russian Aerospace Forces to the Americans and their allies? The answer is simple: the US Air Force has repeatedly struck at positions of government troops, and in the summer of this year, deck aircraft of the United States even shot down the Su-22 Syrian Air Force. This was explained by the fact that he de bombed not the IS, but the "moderate" Kurds.

So what happened on November 23 fits into the big picture. Su-25 worked on specified targets in the Meyadin area. Perhaps the strike of “Rook” really fell, according to the Americans, not to those who should. But most likely the American military, entangled who is today their ally and who is the enemy, simply did not understand the situation. F-22 began to show the Su-25 pilot that he was not working on those goals. But the Russian pilot ignored the American colleague and continued to perform the task.

Due to the unique design and flight characteristics of subsonic low-altitude Su-25 is a very difficult goal for the F-22. If the aircraft of the Syrian Air Force was in place of the Russian car, the “American” would most likely have shot it down. But with the “Rook” the F-22 pilot had to demonstrate all his skills, maneuvering at low speeds.

The report of the Ministry of Defense of Russia argues that "Raptor" released brake flaps. However, the F-22 design does not include such elements. The aircraft drops speed using wing mechanisms and thrust vector variable engines. But, apparently, the Russian pilot saw that the “American” “fluffed up the wing”, and decided that the “American” had released “brake pads”.

Most likely, as soon as F-22 began to behave aggressively, the command decided to call Su-35.

With a halo, but not an eagle

Since its inception, the F-22 has been surrounded by the aura of a unique, invincible car. "Raptor" was created for long-range air combat. Its main advantage is the ability to hit targets at a great distance, while remaining invisible to the enemy radar. But the F-22 is not so invisible. The aircraft can be easily observed visually. But its main demarcating feature is the thermal footprint. It is believed that the main infrared emitter on aircraft - running engines. In particular, this is why the F-22 designers took the nozzles into special movable housings. On the one hand, these structural elements reduce heat generation, and on the other, they serve as elements of the thrust vector control mechanism.

However, the main supplier of heat - the fuselage, wings and other elements of the airframe. They seriously heat up from friction with air, and it is very problematic to hide this radiation. That is why Russia pays close attention to the development of optical-location systems. In particular, the Su-35 received a unique OLS-35, which detects the heat of aircraft at a distance of 60 – 70 (according to other data, up to 100) kilometers. Further to the pilot it is enough to direct the rocket homing head to the target using the control system. The main advantage of the OLS is that, unlike the radar, it operates in the passive mode and does not emit anything. Therefore, it is impossible to detect it.

But in order to approach the Raptor at a distance of 60 – 70 kilometers, where OLS will begin to work effectively, it is necessary to overcome the radar coverage of the American fighter. On board the F-22 is a very powerful station AN / APG-77 with an active phased array. True, the radar "Irbis", installed on the Su-35, according to its characteristics, does not really lose to the American radar. But the “thirty-fifth” is still not as radio-invisible as the Raptor. Therefore, the Russian car must break through as close as possible to the F-22. And here the unique station of electronic warfare "Khibiny" comes to the rescue of the Su-35. Its capabilities are sufficient to minimize the effectiveness of the AN / APG-77 radar. Also, the Su-35 can take a cunning maneuver - start moving closer to the F-22 at an extremely low altitude, where the relief of the terrain will hide it from the all-seeing eye of the American radar station.

At a distance of 60 – 70 kilometers, the maneuverability of the Russian fighter and the capabilities of its OLS-35 will come to the fore. Moreover, in the conditions of radio-electronic jamming, the F-22 will lose its main advantage and will no longer be able to shoot the enemy from a long range, while remaining inaccessible.

Of course, modern combat is a combination of many factors. These include airborne radar detection aircraft, anti-aircraft missile systems, ground-based and airborne electronic warfare systems, as well as automated control systems. The first theoretical papers on the possible advantages of combining OLS, EW and super-maneuverability in the West appeared at the beginning of the 2000s. That is how Australian experts justified the refusal to purchase new American F-18, while many countries in this region actively purchased the super-maneuverable Russian Su-30. True, then such conclusions were questioned. Moreover, they were called "marginal." The concept of stealth fighters dominated with not very high tactical and technical characteristics, but powerful radar and long-range missiles, the embodiment of which was the F-35.

But at the beginning of the 2010s, it turned out that optical-location stations and electronic warfare devices were a dangerous combination for the enemy. In particular, the training battles between Eurofighters and F-22 showed that the latter lose when the Europeans use their IRIS-T OLS. At the same time, Eurofighter cannot boast of good maneuverability, for which it is even called a “flying iron”, and powerful EW systems. And the US Air Force is already actively experimenting with 2015 in the direction of using overhead sighting containers in air combat.

So, on November 23, Su-25 appeared in the Su-22 and F-35 maneuvering area. How sudden was his appearance for the USAF? Apparently, the Russian fighter has achieved a complete surprise. How did you manage it? Either the pilot activated the Khibiny and penetrated the area under their cover, or the Su-35 was walking at extremely low altitude. The latest version is supported by the fact that the Su-25 is a low-altitude vehicle. And in Syria, the “Rooks” rarely rise above five thousand meters. Based on the fact that the F-22 involved the mechanization of the wing, it was at a low altitude that the incident occurred.

Below five thousand meters and in the conditions of close combat, the advantage has completely shifted to the side of the Su-35. At the same time, the American pilot could not understand whether his Russian colleague took him on the OLS-35 or not. Probably, the heat traps mentioned in the message of the Defense Ministry of the Russian Federation, which the American fighter was shooting, were an attempt to knock the optical-location station off the track. In this situation, the pilot of "Raptor" realized that he had completely lost, and preferred to retire as quickly as possible.

In essence, November 23 in a combat situation for the first time faced two concepts. “Marginal” combination of OLS, electronic warfare and ultra-maneuverability against the “trend” set of powerful radar, radar invisibility and long-range missiles. The “marginals” won behind the clear advantage, which casts doubt on everything that has been achieved by Western aviation in the last thirty years.

Ctrl Enter
Noticed oshЫbku Highlight text and press. Ctrl + Enter
We are
List of destroyed the largest and most high-tech enterprisesMilitary reform as an integral part of the security concept of the Russian Federation: Systematic dynamic assessment
Military Reviewin Yandex News
Military Reviewin Google News
38 comments
Information
Dear reader, to leave comments on the publication, you must to register.