The news we deserve? 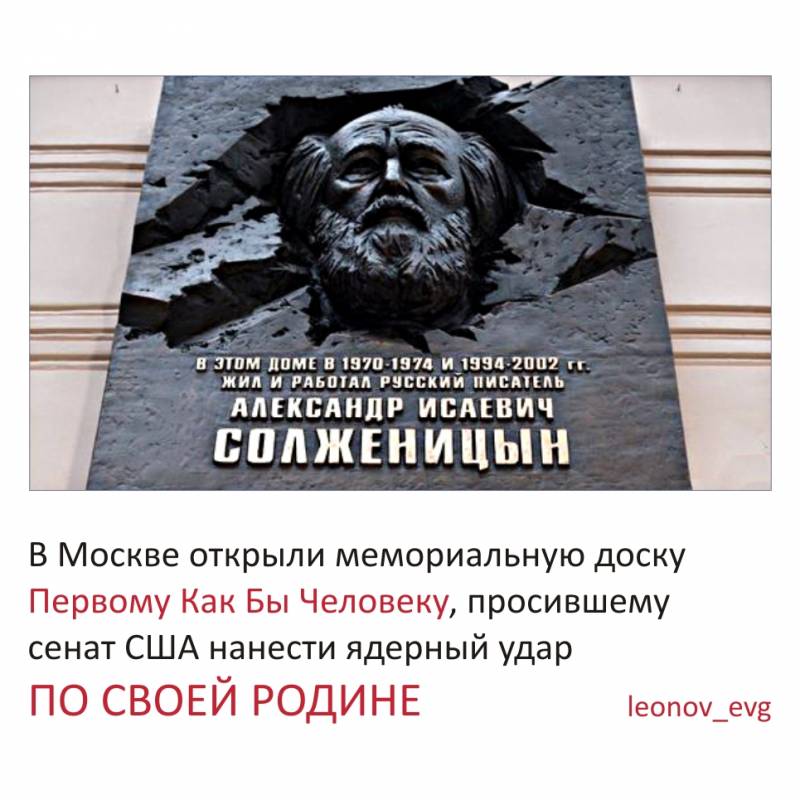 On Monday, a memorial plaque to Alexander Solzhenitsyn, a writer and Nobel Prize winner in literature, was opened in the center of Moscow. So says news. Hard to resist. But I will continue to quote ...

"The board is located on the front part of the 12 house, 8 building along Tverskaya Street from Kozitsky Lane. This house housed the apartment where the writer lived, and in 1974, he was arrested there on the eve of emigration. A museum is being created in this apartment.
The author of the work was a sculptor, chairman of the Union of Artists of Russia Andrei Kovalchuk. The opening ceremony of the memorial plaque was attended by Natalya Solzhenitsyn’s widow, Deputy Prime Minister of the Russian Federation, Chairman of the Organizing Committee for the 100 anniversary of the writer Sergei Prikhodko, Deputy Moscow Mayor Leonid Pechatnikov, President of the Russian Book Union Sergei Stepashin, Federation Council member Vladimir Lukin, Solzhenitsyn’s friends .

The board is open on the day of the writer’s 99 anniversary, and on the 100 anniversary of this date dozens of events are planned to study and popularize the writer's work. "

I remember how I, a tenth grade student, was told to read his "The Gulag Archipelago", "In the First Circle," "Last Day ..." of some Ivan Denisovich.

And, it should be noted that the teacher of literature in my school was my mother — a teacher with experience, with awards and a bunch of children who won deserving places at the Olympics under her strict guidance.

And then such a slag in the form of this shit, which, well, just did not fit into the mind of the child ... 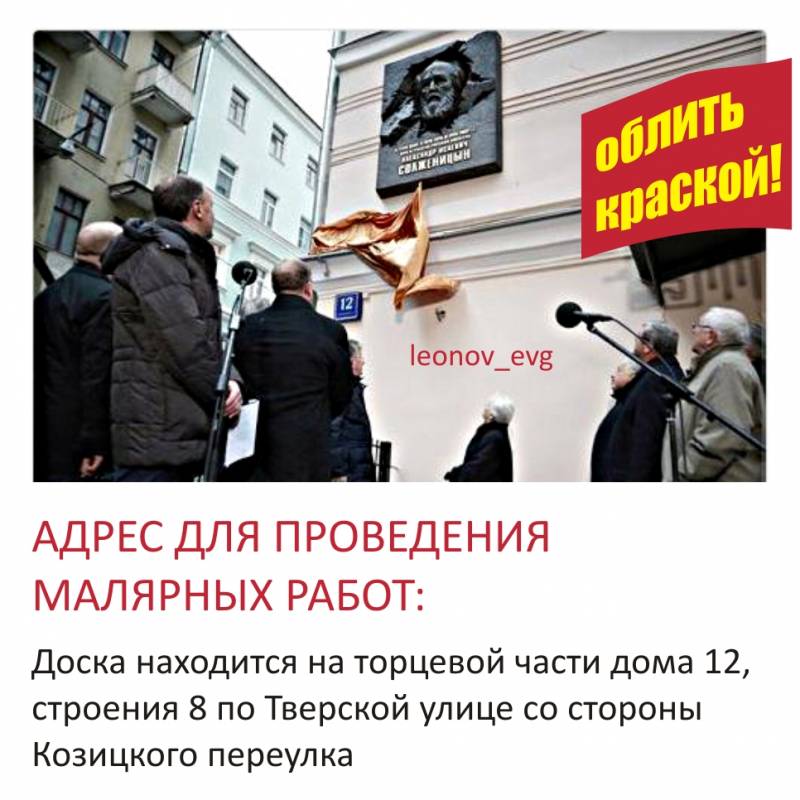 When I asked her what it was and why to read it, she replied that these works were included in the compulsory school curriculum.

Need I say that it was 90? I emphasize: compulsory! That is, they were collected, the old Soviet teachers, teachers, and put before the fact: to relay on children this, without exaggeration, to say nonsense and heresy against our own people.

It took me years to grow up and realize how harmful the food was then fed our minds. Overwhelmed with emotion.

I will switch to time ... I will continue to quote news feeds:
"Bolshaya Kommunisticheskaya street in the center of Moscow was renamed Solzhenitsyn Street, a monument to the Nobel laureate is planned to be opened on it, not far from the House of the Russian Diaspora, bearing the name of the writer, on Upper Radishchevskaya Street." Communist! K o m m u n i s t i k e c k u! Here is a paradox!

In 90, we were defeated, we were replaced with an ideology-matrix, instilled the idea that "everything communist is bad," and we began to be treated with outright Russophobic propaganda. People, wake up! SOLZhEnitsyn - a traitor to their homeland. 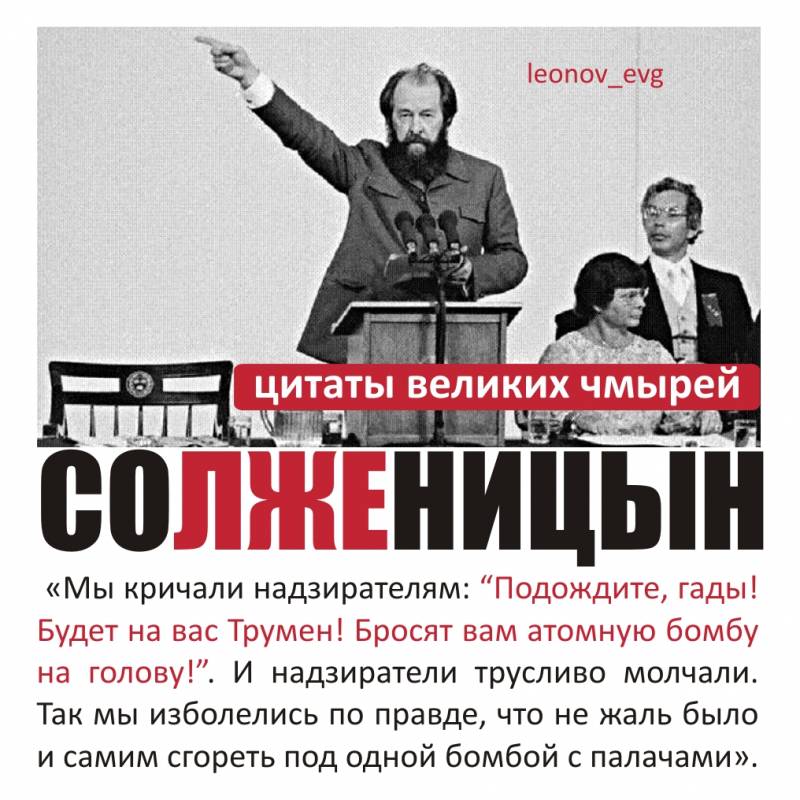 Quotation from the opus titled "The Gulag Archipelago:
“We were glowing with each other in such a mood — and on Omsk on a hot night, when we, steamed, wasted meat, were kneaded and crammed into craters, we shouted to the guards from the bottom:“ Wait, bastards! Truman will be at you! They will throw an atomic bomb on your head ! ". And the guards were cowardly silent. Our pressure grew perceptibly for them and, as we felt, our truth. And so we were really sorry for the truth that it was not a pity to burn ourselves under the same bomb with the executioners. We were in that ultimate state, when there is nothing to lose. ”

That is, this person, as it were, declares that he wants Truman to be found on us? Whoever dropped nuclear bombs on Japanese cities! Is he in his mind? And was he in his mind when in the US Congress he called on America to launch a nuclear strike on the USSR?

I will not post here a video of his speech before US congressmen - it is of very poor quality and with an off-screen, infamous English translation. You can all find it in YouTube on request. Also about all the facts of sponsorship of this insignificant person by America is widely known, and I will not give them here.

I want to talk on another topic that I consider relevant in this context. 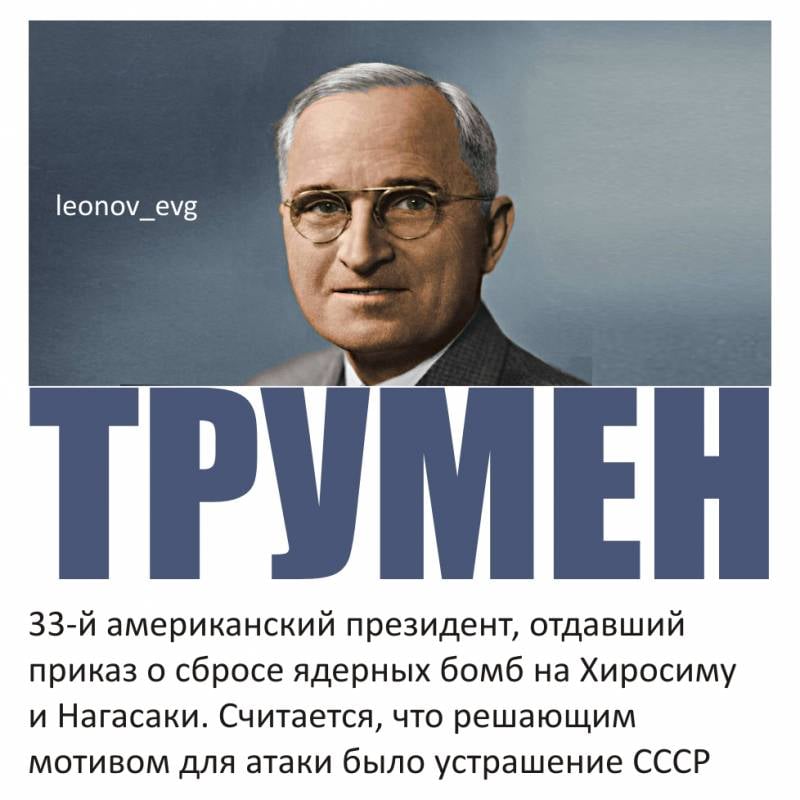 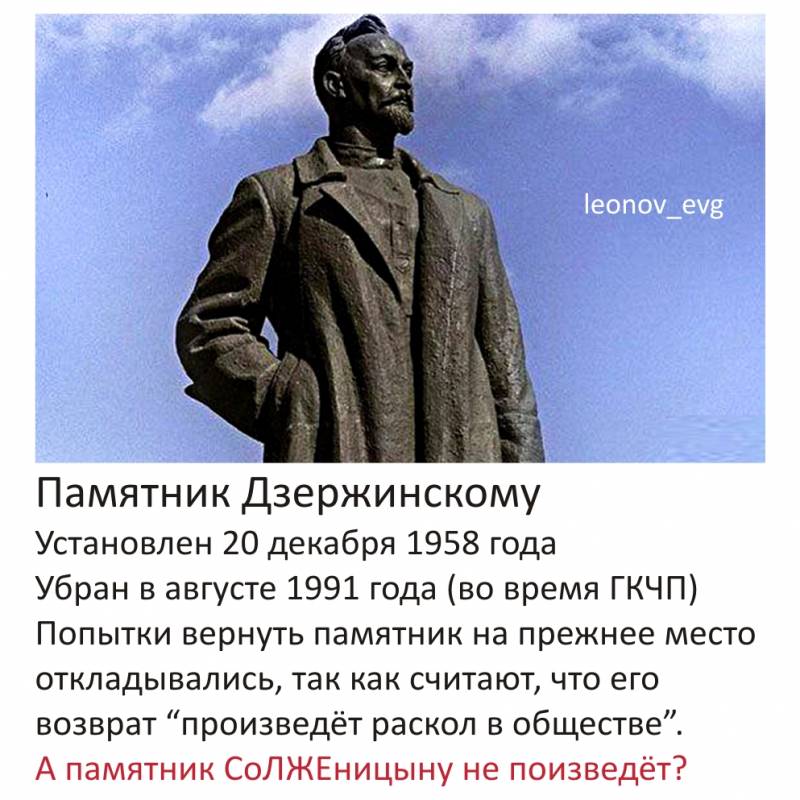 Everyone knows that in 1958, on December 20, a monument to Felix Edmundovich Dzerzhinsky, the founder of the All-Russian Emergency Commission (VChK), was opened in Lubyanskaya Square in Moscow. 22 August 1991 The monument to Dzerzhinsky was dismantled by the defenders of the White House, who celebrated the victory over the coup. The bronze monument was transferred in 1994 to the Sculpture Park on Krymsky Val.

For several years, disputes about the possible restoration of the monument to Dzerzhinsky on Lubyanka have not abated. For the return of the monument to its former place, the Moscow authorities more than once spoke (for example, Y. Luzhkov, and there was also a separate attempt from the communists). However, each time this idea was rejected by the Moscow City Duma’s commission on monumental art, citing the argument that “the restoration of Dzerzhinsky’s figure could split the society”.

And the opening of the memorial plaque SOLZHENITSINA cannot split the society? Are you out of your mind? So, Iron Felix - down, and a traitor to the Motherland - to honor and praise as a benefactor?

It's not my style to splutter. I always try to find a reasonable way out. But the use of fists in extreme cases, I do not exclude. By fists, I mean this ...

We have already achieved the removal of the board of Mannerheim, the pest for our country. The same must be done with the board of the American henchman Solzhenitsyn. And in order for this process to move faster, I am for people who are ready to carry out “painting”, indicating here the location of this disgraceful artifact for us: the 12 house, the 8 structure along Tverskaya Street from Kozitsky Lane.

And, yes, for those who misunderstood: I urge to paint this board. 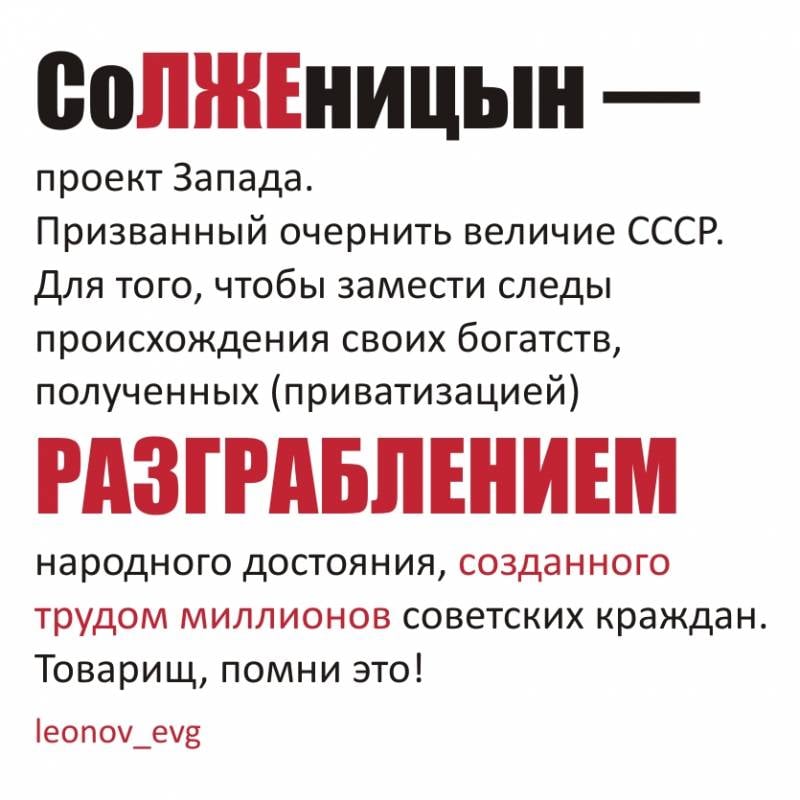