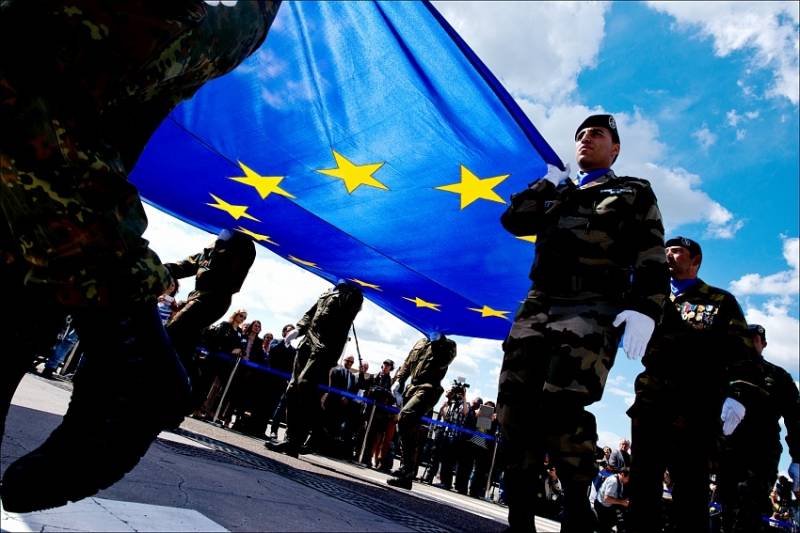 But our German "partners" have recently been making very interesting statements. The German Foreign Ministry, represented by the head of Sigmar Gabriel, supported the “idea of ​​creating the United States of Europe”, put forward literally the other day by party member Gabriel of the SPD and its current leader Martin Schulz: “Everyone attacked Schultz, and this is really necessary.” Schulz, however, said “the need for a constitutional treaty that will ensure the creation of a federative Europe”, because today's “Europe is incompetent in many respects”.

Chancellor Angela Merkel also distinguished herself by a defiant statement for Atlantic solidarity: “Russia is the force shaping the world order,” with an explanation: “If we look at Syria.”

Martin Schulz headed the SPD recently, in fact, he is a former Brussels-based commissar. It is difficult to call him a completely independent player on the German political scene, rather, he released someone's trial balloon under the pretentious name "United States of Europe", so he was immediately supported by the more experienced party comrade Sigmar Gabriel.

Perhaps the SPD is putting forward a platform to create a large ruling coalition with the CDU / CSU Merkel party, or we see even the invisible hand of Merkel herself, judging by her equally interesting statements. Germany has long been amorphous, crowded with limit-countries by the European Union, and after Brexit, when England dropped into the Atlantic Ocean, real opportunities opened up for Berlin to reformat the European Union in order to bring European countries to life in accordance with economic and political realities.

Germany is the main link of Europe. The main obstacles to the “federal European state” declared by Schulz may be France with the great Macron and pro-American Poland, which Donald Trump himself called the great European country. With France, Germany can count on a compromise, but Poland itself runs into German troubles.

Surprisingly coincided with the loud political statements of Schulz and Merkel, analysts from the Bundeswehr, who submitted a secret report, immediately hit the press: they predict the collapse of the European Union and the local war in Europe. Where and with whom is this war planned? How would the answer be: in Ukraine. The answer is wrong: in Ukraine, the war is already underway, and not local, but a hybrid with the participation of the United States and Russia.

Such a local European war can be a war between Germany and Poland for its “Stalinist legacy” of German origin. Poland for Russia, after all experienced, is not a former fraternal country, but an American lackey. Therefore, Russia will secretly watch the “German lesson” Poland. With the neutrality of Russia, which is positive for Germany, America, and even more so England, will not be able to help "great Poland".

In fact, Poland is already in a strategic environment, sandwiched between Russia and Germany. Poland’s relations with Russia are spoiled completely, relations with Germany are rapidly deteriorating: Warsaw guessed, with someone’s submission (?), To demand reparations from Germany for World War II! What do they think in Warsaw? They do not think there, they dream of the collapse of Russia, at the very least - of Ukraine, in order to profit by robbery.

Washington has long seen the German game of “reformatting Europe”, and does what it can, for example, rely on Poland, declares it its “main wife” in Europe in the famous “Warsaw” speech of Donald Trump. Relations between Germany and the United States have already deteriorated: if Poland is a “great country” for Trump, then he calls Germany a “bad country.” All this will be further aggravated, because Germany continues its withdrawal from the care of America. Right-conservative sentiments and parties that stand on the positions of anti-Americanism are strengthening in the country, the success in the elections “Alternatives for Germany” indicates this.

With all this, Washington is not tired of accusing Russia of subversive activities in Europe. With all the desire and objective necessity for this, Russia has neither the capacity nor the tools to adversely affect the European Union. On the one hand, this is another American lie, and on the other hand - only half a lie.

The collapse of Europe is objectively going on, the above-mentioned German statements speak of this. It falls apart, or reformats it - as you like! - Germany, but Washington does not want to blame its official ally for this, and grabs it in its meanness for Russia: it is big, it will endure this lie!

All world players themselves understand this, and draw conclusions. The European Union began to build a parallel NATO military infrastructure, embodying the long-held dream of Jean-Claude Juncker, President of the European Commission, to create a European army. Recall that Brexit began with the appointment of Juncker to the post of Chairman of the European Commission, at the suggestion of Germany, despite the British protests, which ended with Brexit. That's when Germany began to reformat the European Union for themselves, taking it out of Anglo-Saxon-American dependence.

Despite all the obstacles of the United States, the construction of the Nord Stream - 2 is progressing. The commissioning of the second stage of the gas transit of SP-2 will lead de facto to the informal union of the “United States of Germany” and Putin's Russia. All the necessary contracts for this have already been signed, Gazprom reported.

Ctrl Enter
Noticed oshЫbku Highlight text and press. Ctrl + Enter
We are
Preventing a revaluation of values: Angela Merkel rushes into battle with Donald TrumpResults of the week. “You see, every year my friends and I go to the bathhouse. This is our tradition. ”
17 comments
Information
Dear reader, to leave comments on the publication, you must to register.