Simultaneously with the creation of the first Yokoshi underwater-based production aircraft E6Y1 in Japan, they began construction of the first aircraft-carrying submarine of a special construction - the I-5 project J1M. The abbreviation "J" - abbreviated from "Junsen" ("Junyo Sensuikan" - from the Japanese "submarine cruiser"). The J1M project was a development of the J1 project, differing from it in the presence of aircraft armament.

The boat was laid in October 1929 of the year in Kobe, in the shipyards of the firm "Kawasaki" and entered service in July 1931 of the year. The main tasks of the I-5 submarine were reconnaissance and combat against merchant ships and enemy ships in the Pacific. It had a surface displacement of 2243 tons (submerged 2921 ton) and a range of 24400 miles in the surface position at a speed of 10 knots (in the submarine 60 miles at 3 knots). The autonomy of the boat was 60 days.

The E6Y1 seaplane was disassembled in two small hermetic cylindrical hangars, installed side by side for chopping, recessed as much as possible into the deck. This was done to maintain the normal stability of the submarine. The E6Y1 fuselage was removed in the right-hand hangar, and the wings and floats in the left. Parts of the aircraft before assembly were removed from the hangars with a special crane on the deck. The seaplane assembly time ranged from 30 to 40 minutes. Already with a little agitation, the extraction of parts of the aircraft became impossible, since the low-lying hangars were flooded with sea water.

Pneumatic catapult Type N1 model 3 was mounted behind the hangars in the stern of the boat only in 1933 year (after testing aboard the boat I-52). It provided the launch of aircraft weighing up to 2 tons. Until that time, “Yokoshi” E6Y1 took off from the water, where it was lowered by crane.

The cruising I-6 project of the J2 project became the second specialized aircraft-carrying submarine. The submarine was laid in the 1932 year (ibid Kobe) and was commissioned in the 1935 year. It installed a pneumatic catapult Type N1 model 4 of lower power (launch of aircraft weighing up to 1600 kg), since the capabilities of the previous model were considered redundant (normal take-off weight E6Y1 did not exceed 800 kg). The I-6 itself differed from the I-5 in a slightly larger displacement (underwater 3061 tons), power of diesel engines (8000 horsepower against 6000) and reduced ammunition of torpedoes (17 against 20). The autonomy of swimming increased to 90 days.

Submarine I-6 took into account the experience of the previous boat and aviation the hangars were equipped with hydraulic lifts, which lifted them above the deck from a half-sunken (stowed) position before removing parts of the disassembled seaplane from there. This made it possible to assemble the aircraft with little excitement, reducing the dependence on weather, unlike I-5.

In 1934, two more aircraft-carrying submarines of the J3 project were laid. These were the boats I-7 and I-8 (entered service in 1937 and 1938). They became the largest submarines of Japan, built in the prewar period. Surface displacement was 2525 tons (underwater 3061 ton). The boats could operate throughout the Pacific (the range in surface position at 16 speed nodes was 14000 miles) and acted as flagships of submarine squadrons. 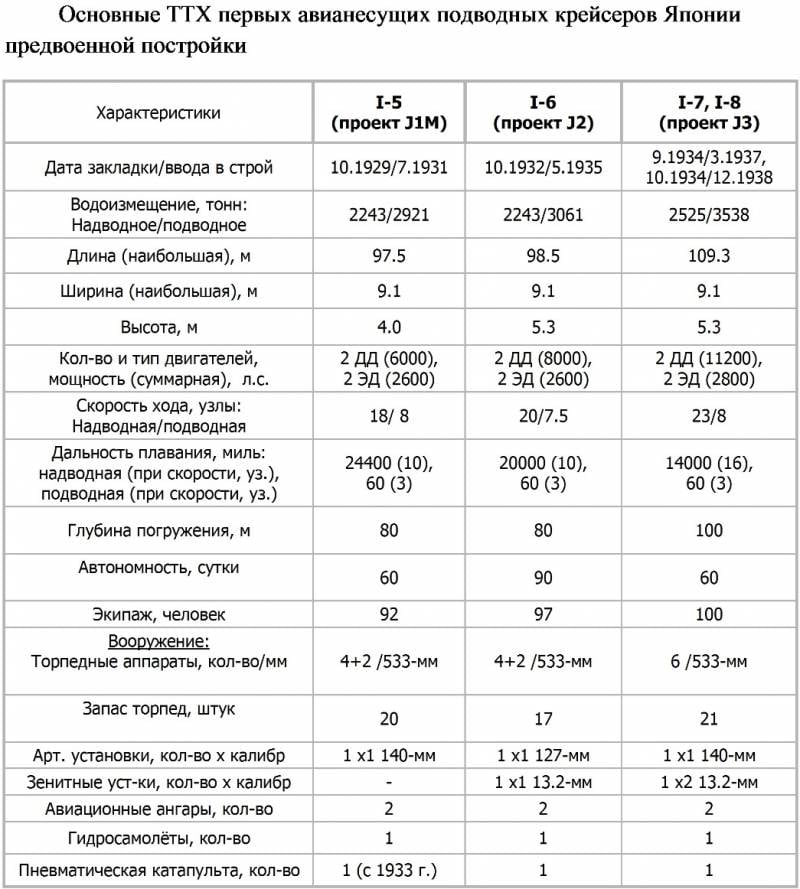 At the beginning of 1934, when active preparations were underway for construction for the Imperial Japanese Naval fleet of two flagship aircraft carriers of the J3 project, the development of a new, more modern reconnaissance seaplane began.

In accordance with the new requirements (9-Shi specification), it was supposed to be a double two-float seaplane with a strong and lightweight design, compact size and folding wings. When folded, the aircraft was to be freely placed in a cylindrical hangar with a diameter of 2 meter. Since the length of the aircraft hangar on a submarine depended on the size of the promising seaplane, in order to minimize it, the developers put forward the condition of developing, as far as possible, a short fuselage. The number of metal parts in the design of the aircraft, in order to increase resistance to the corrosive effects of salt sea water, should also be small.

The winner in the competition for the creation of a new aircraft for submarines project J3 was the company "Watanabe" (Watanabe). In March, 1934, the engineers of the company, under the leadership of the chief designer of the project Riohachiro Higuchi, began to create a new aircraft. All work was done in the strictest secrecy.

The first prototype of a naval reconnaissance seaplane, designated “Watanabe” E9W1, was built in August 1934 of the year and was intended to conduct a complex ground test. Flight tests began only in February 1935, after the release of the second E9W1 prototype and took place in the area of ​​the Fukuoka naval base from the I-5 and I-6 submarines. 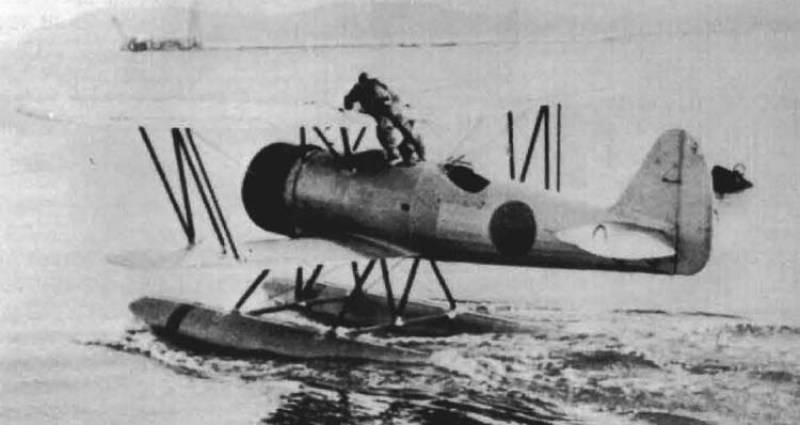 The prototype of the “Watanabe” E9W1 seaplane under test

The seaplane “Watanabe” E9W1 was a double single-engine float biplane of small size and mixed design. The fuselage frame was welded from steel pipes and in the front part was sheathed with sheet duralumin, and in the tail section - with linen and plywood. The upper wing was attached to the fuselage by four racks, and the bottom - directly. The upper and lower wings were connected by struts N-shaped and braces. The lower wing in relation to the upper wing was slightly shifted back. The ailerons were installed on both the lower and upper wings. Two large floats were fastened to the lower wing with uprights. Right behind the upper wing in the fuselage were open cockpits of the pilot and the observer, with small transparent visors. The observation booth was equipped with a radio station and a defensive 7.7-mm machine gun (Type 92) on a pivot mount.

For placement in the aviation hangar of the submarine E9W1 understood on 12 parts. It took just a minute and a half. The assembly of the aircraft was carried out in two and a half minutes. 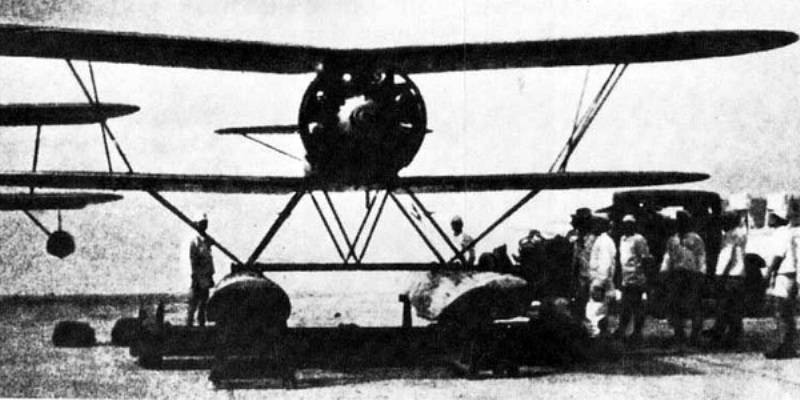 The prototype of the “Watanabe” E9W1 seaplane on the coast

The Hitachi star-shaped 9-cylinder air-cooled engine GK2 Tempus 11 with horsepower 340 with a wooden two-blade constant-pitch propeller provided the aircraft with a maximum flight speed of 232 km per hour and cruising 148 km per hour (at 1000 meters altitude). The normal range of the flight was 590 km, and the maximum - 730 km. The practical ceiling E9W1 is equal to 6750 meters. The reserve of fuel in the tank with a capacity of 250 liters ensured the maximum flight duration within 4.9 hours.

Reconnaissance seaplane "Watanabe" E9W1 from the submarine I-6

During flight tests, unsatisfactory longitudinal stability was revealed - in flight, the E9W1 constantly tried to upset its nose, and during sliding, there was a tendency to gassing. In addition to the whole picture of the flight, there was also a tendency to spontaneous heeling. The problem was solved by installing a new keel of larger area and height (on 100 mm).

In June 1936, the flight tests of the second prototype "Watanabe" E9W1 were successfully completed. After the modifications, the new seaplane met the requirements set for it (9-Shi specification) and was adopted by the Imperial Japanese Navy under the designation E9W1 model 1 (“small naval reconnaissance type 96 model 1”). 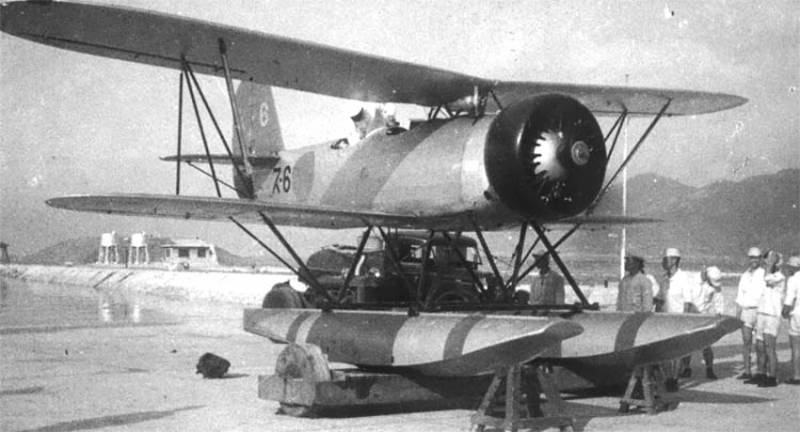 Even before the completion of testing and official adoption at the factory of the company “Watanabe” in the city of Fukuoka, the production of an installation batch of new seaplanes was started. Serial aircraft differed from the prototypes by changing the design of the racks for attaching the floats to the fuselage. All were released 32 serial aircraft E9W1 and one flight prototype.

The first E9W1 arrived on the equipment of the submarine I-7 and I-8 in 1937 and 1938 years after they were commissioned. During the blockade of the coast of China, these submarines operated in the South China Sea. Seaplanes carried out reconnaissance flights, taking off from boats using pneumatic catapults. In addition to intelligence, the E9W1 was used to guide tactical submarine groups (submarines) to detected transport vessels attempting to break through the blockade.

If in the initial period of E9W1 operation, a team of four people took about an hour to prepare for its departure, then as they gained experience, this time was reduced to 40 minutes. After the reconnaissance flight was completed, the seaplane was landing next to the boat and it was lifted aboard with the help of a crane, taken to pieces and placed in a hangar. At the beginning, they also spent an hour on this operation, but then this time was significantly reduced.

The experience of the combat use of I-7 and I-8 submarine cruisers showed that the seaplanes based on them significantly expand the combat capabilities of submarines for conducting reconnaissance in remote areas (outside the range of the basic reconnaissance aircraft) and conducting combat operations on enemy sea lanes.

However, the location of the catapult behind the cabin in the stern deck of the boat and launching planes against the course, as well as storing them in disassembled form in two separate hangars was considered extremely inconvenient and unsuccessful (the preparation of the seaplane took too much time, and to launch it the submarine had to stop ).

The Watanabe E9W1 itself was the first truly serial reconnaissance seaplane intended for basing on cruising submarines. He served on Japanese submarines for six years, until his replacement, starting with 1940, with the more advanced Yokosuka E14Y float monoplane. In the middle of 1942, the 14 reconnaissance aircraft E9W1 was still in service on the I-7, I-8 submarines. I-10, I-15. I-17.I-19.I-21, I-23. I-25 and I-26, but by the end of the year they were replaced.

The Americans learned about the existence of "Watanabe" E9W1 just before the outbreak of hostilities in the Pacific Ocean and assigned it the union code name "Slim" (Slim).

Of the 32 built, six E9W1 were supplied by the Royal Thai Navy, where they successfully served until 1946. 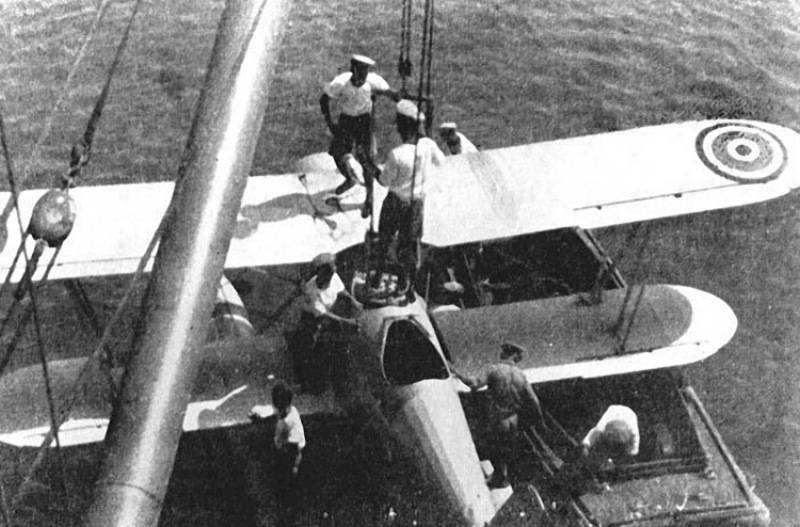 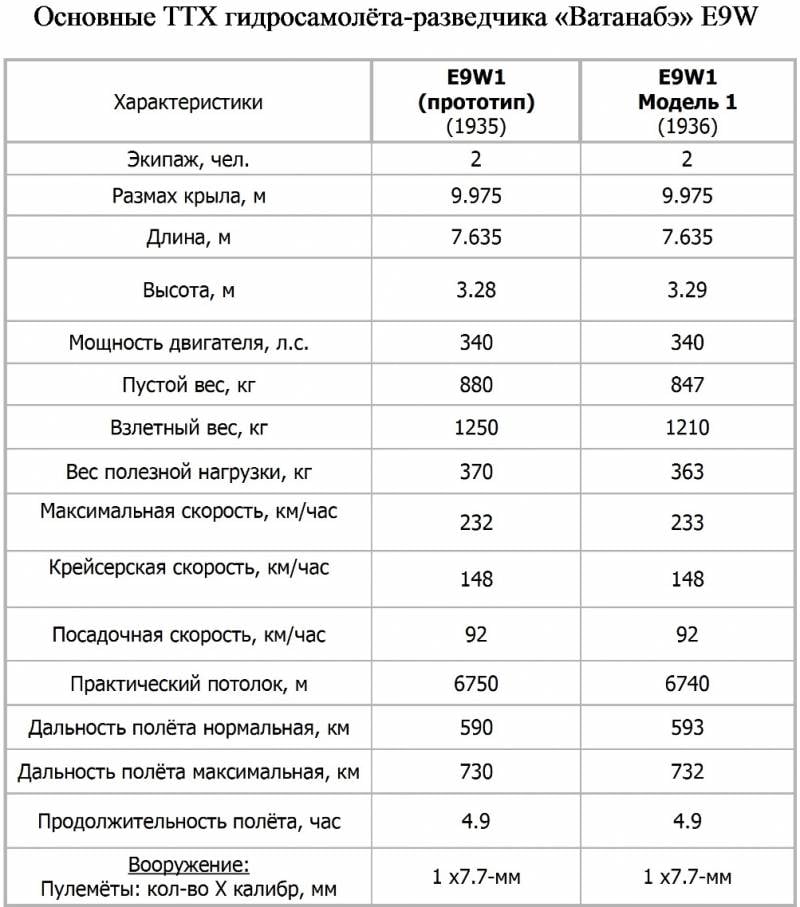