Autumn, ships are burning in the sky ... About the report of the Roscosmos Commission

December 13 2017
80
On the eve of the so-called emergency commission of Roscosmos published a report, which reflected the results of the investigation of the unsuccessful launch of the Soyuz-2.1b launch vehicle. It is worth recalling that as a result of the failure that befell the space system being put into near-earth orbit, 28 of November lost 19 of various satellites, including not only domestic, but also foreign ones. In Roscosmos promised to conduct an investigation as quickly as possible and not to delay the conclusions. The usual in such cases, the publication of the conclusions of the special commission did not really happen, and the final calculations of the experts who made up the commission were published two weeks after the crash. 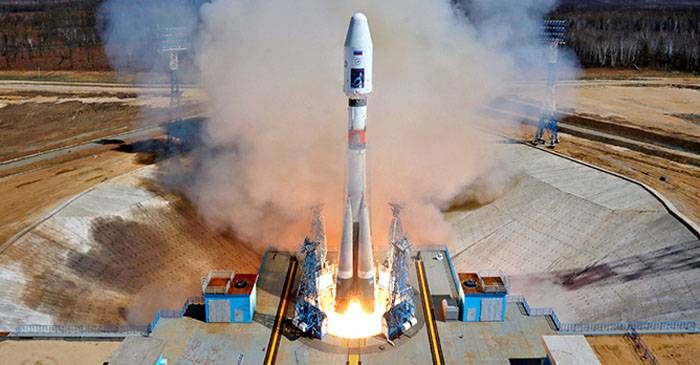 From the materials of the commission that were sent for publication in the media:
The collapse was caused by the unpredictable behavior of the Fregat upper stage after it had separated from the launch vehicle. This revealed a hidden problem in the algorithm, which was not manifested for decades of successful launches of the Soyuz-Fregat ligament.
The terms “unpredictable behavior” and “a problem that has not manifested itself for decades”, frankly speaking, are alarming.
Further from the commission of Roscosmos:
After the separation of the upper stage, the control system began to issue a control action to turn the orbital unit to the required angular position. At the moment of spatial orientation of the accelerating unit, the non-standard angular position of the RB “Fregat” was recorded. As a result, he left the calculated orbit after the incorporation of the main engines.

Further, the specialists stated that the existing combination of parameters of the launching pad of the cosmodrome and the azimuths of the launch vehicle and upper stage were never met. That is why, they declare in Roscosmos, the existing methods did not allow to initially identify problems with this kind of combination.

More from the official report of the Ministry:
Having conducted a comprehensive analysis, the commission members believe that the manifestation of this incorrectness of the algorithm might not have happened when launching the same payload from the Vostochny cosmodrome with the same upper stage on the same rocket. The launch would have passed normally, for example, in the summer or in the event that the areas of falling of the detachable parts of the PH were set aside from the selected ones.

Frankly, such statements made in the final report look pretty strange. One gets the impression that all these interpretations about the “unseen until now” combination of parameters and azimuths are used in order not to focus on the main problems. But the main problems lie in the actual irresponsibility of some against the background of lack of control on the part of others.

When you read the paragraph “as if” about the reasons for the fall, and in it (in the paragraph of the report) there appears a phrase that, they say, the launch would have passed normally, if it were summer, and not late autumn — the pre-winter period, then you involuntarily ask yourself: And when did the time come in astronautics, when it became important to take into account the whole time of year, rather than the specific time of launch and its specific date, for the output of satellites to near-earth orbit? It turns out that keeping track of the coordinates of the launch site of the launch site and azimuth of the launch vehicle for Roscosmos specialists is much easier in the summer than keeping track of the same parameters in the fall ... Is it possible that not only those involved in calculations, but also the performance of the processors used in the equipment are cold? ..

Based on the statement of the special commission, it remains only to get lost completely when answering the question: how did the Soviet specialists manage to fake and launch the first artificial Earth satellite in October? Is it possible that their lateral computing tools were not affected by the October dank weather, and the launching table “did not tilt” in relation to the launch vehicle azimuth during the calculations.

In general, you can play here as long as you like, and those very problems of irresponsibility and lack of control do not disappear from this. By the way, the government stated that, they say, there’s no need to worry too much. Like, all the losses covered by insurance. Fear, they say, and further, and drop even on 19, even on 119 satellites "in one sitting" ... everything will pay off. But what about prestige and reputation, which no insurance exactly covers, and cannot cover by definition. But is it really accepted to talk about it by officials today ...

After all, if it were customary to say, then I would have to state the obvious things: the storekeeper (or the welder), by definition, cannot be the main culprit in the crash of a spacecraft for the simple reason that it is just a storekeeper (and just a welder). And behind them there is a whole system of “effective management,” whose representatives master enormous funds from the budget, but a priori are not ready to bear personal responsibility.

After all, if it were customary to say, we would have to admit that we have built such an education system, which eventually smears any incompetence, exposing it to an individual “creative” approach. He is an artist, he sees it ...

If we, starting with the education system, the paper of the report replaces any real result of the work, and it’s on the paper that the eyes of the inspection bodies are burning, then what to say in other industries. In the same space, you can then unsubscribe, that, they say, the coordinates, parameters and azimuth "it would be better to be summer", and then "put" the form of the insurance policy - and all the cases.

All interested parties have already figured out that it is this approach that suits the management. And then it is necessary, indeed, to look for real culprits, to find a reference to modern training in educational "organizations." Well, that’s good, you’ll have to come to the current programs of the famous TV journalist Konstantin Semin, and answer his burning questions about why our educational centers are growing like mushrooms after rain, and the level of education continues to fall, why through federal channels - “ Sirius "and other" Kvantoriums ", and in the provincial schools there are toilets on the street, thin roofs (although devastation is not known to be closet ...), and 1 is a computer in the computer science office, and even then brought from an enthusiastic teacher.

So, it turns out that the next launches can be expected in the summer? .. Or will there again be problems: heat, locusts and dry winds, which prevent rockets and the entire modern space industry? ..

Otherwise, now the text from the DDT repertoire “Autumn, harnessing ships in the sky” has an additional meaning.

Ctrl Enter
Noticed oshЫbku Highlight text and press. Ctrl + Enter
We are
Situational analysis of the death of the MH17 flight (Malaysian Boeing 777), made on the basis of engineering analysis from 15.08.2014Another satellite crashed without reaching the specified orbit
Military Reviewin Yandex News
Military Reviewin Google News
80 comments
Information
Dear reader, to leave comments on the publication, you must to register.