What did Putin discuss with the leaders of Syria, Egypt and Turkey? 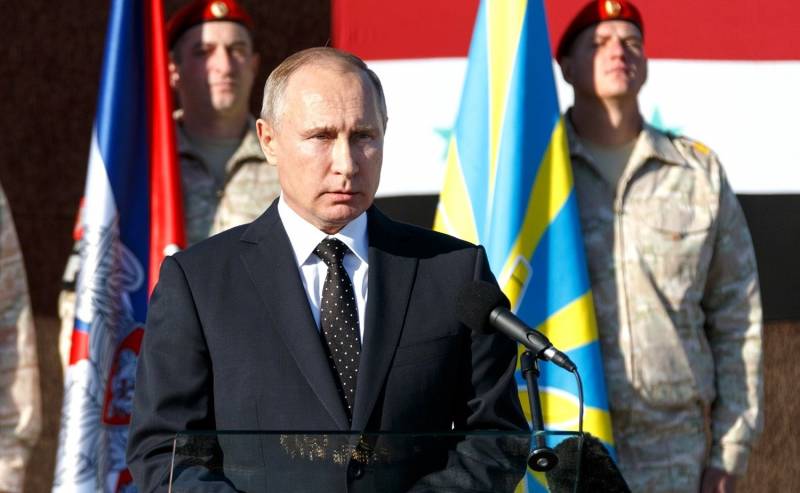 Bashar Assad at a meeting with the Russian president, thanked Russia for effective assistance in the fight against terrorism.

Indeed, the threat of terrorism is generally very high. The fact that we defeated one of the main groups in Syria, the IS (banned in the Russian Federation), is extremely important for Syria, and for Russia, and for the whole world,
said Vladimir Putin.

He noted the merits of the Russian group and gave the order to proceed with the withdrawal of troops from Syria, thereby putting an end to the operation that began at the request of Assad 30 September 2015 of the year.

As Sergei Surovikin, commander of the Russian forces in Syria, who spoke to Putin, said that “the forces and assets remaining in Syria are enough to carry out tasks with the same efficiency in the future.”

It is noteworthy that “Putin’s visit to Syria and his statements were made against the background of Moscow’s and Washington’s correspondence polemics about the merits in the victory over the IS”, now Western partners “will find it more difficult to dispute the fact that Moscow has significantly strengthened its position in the region”, Fyodor Lukyanov, editor-in-chief of Russia in Global Affairs magazine.

I think that this blitz-visit to Syria and the announcement of the end of a major military campaign played a significant role, since everything that happened with Russia's position in the Middle East and the change of its status and capabilities, as well as further prospects, are primarily related to Syria. It is clear that the end of a major military phase does not mean, firstly, a complete withdrawal from there, secondly, it does not mean the cessation of diplomatic efforts, but, on the contrary, presupposes their sharp activation,
Lukyanov told the agency.

In his opinion, the main issue to be resolved during his visit to Cairo and negotiations with the Egyptian leader was the restoration of air links between the countries.

The most important thing was to resolve the issue with the flight connection, which extremely worries the Egyptian side. Apparently, he is close to resolution, and this removes the obstacle to the further development of relations. Because for the rest, relations between Russia and Egypt in the last 3-4 of the year, excluding the tragic incident (in November 2015 of the year, the plane of the Kogalymavia airline that flew from Sharm el-Sheikh to St. Petersburg crashed over)
said the expert.

Putin, during a meeting with his Egyptian counterpart Abdel Fattah al-Sisi, said that Russia as a whole "is ready to resume direct flights between Moscow and Cairo." Later it was announced that the Russian side is ready to sign a protocol with Egypt by direct flight connection this week.

Another important topic of the meeting of the two leaders was the discussion of the situation in the region, which again became tense after the US recognized Jerusalem as the capital of Israel.

Obviously, the situation in the region is changing very quickly, Trump's latest decision on Jerusalem, of course, introduces an additional factor of uncertainty. I think that for Russia it is now very important to take a position that would be constructive and would not be aimed at supporting one of the parties to the conflict. That is, Russia cannot, roughly speaking, give up Israel, it is an important partner of Moscow in the region, but Russia cannot join the American position and recognize Jerusalem as the capital of the Israeli state without simultaneously recognizing Jerusalem as the capital of a Palestinian state,
said Andrei Kortunov, director general of the Russian International Affairs Council (INF).

Putin’s one-day visit to Turkey was the seventh meeting with Erdogan from the beginning of 2017 of the year, before that they had met both during bilateral negotiations and on the margins of various forums.

At a joint press conference on Monday evening, Erdogan called the US actions to recognize Jerusalem as the capital of Israel “an irresponsible step.”

We saw that the position of the President of the Russian Federation is similar. We agreed with him in opinions. Two days later, a summit of the Organization of Islamic Cooperation will be held in Istanbul, where a very serious signal will be given on Jerusalem,
added the Turkish leader.

The most important topic of the meeting was the Syrian settlement, especially after Putin’s morning statement about the end of the operation of the videoconferencing system.

Turkey is the most important partner now. Because without close cooperation and mutual understanding with Ankara, the Syrian issue will not be solved further, Turkey is critically important for Russia in this regard. I do not think that there is complete love, trust and harmony between Moscow and Ankara, this cannot be, given the extent to which interests differ in many parameters in the Middle East. But both parties understand that they really need each other. And frequent contacts with Erdogan show that very pragmatic and rational approach,
said Fyodor Lukyanov.

Another significant statement at the end of Putin’s blitz visit to Ankara was the practical end stories With the Ankara deliveries of the Russian C-400 air defense systems: the presidents said that the issue would be resolved within a week.

Ctrl Enter
Noticed oshЫbku Highlight text and press. Ctrl + Enter
We are
Results of the week. “Take off your hats! Expose the head! The body will be taken out now! ”
Military Reviewin Yandex News
Military Reviewin Google News
72 comments
Information
Dear reader, to leave comments on the publication, you must to register.