Constitution day. Can the Basic Law become a binding law for all?

December 12 2017
53
The Constitution of the Russian Federation. What associations arise among those citizens of Russia who were, if I may say so, at a conscious age, when the main document of the country a couple of years after the collapse of the USSR was adopted? Sociological studies show that among the wealth of opinions of Russians about the adoption of the Constitution of December 12 1993, the opinion prevails about a kind of overlap of most of the items in the new version of the main set of laws. Obsessions from the outside.


In the interview "Russian newspaper" Pavel Krasheninnikov, head of the State Duma Committee on State Construction and Legislation, who participated in the drafting of the 1993 Constitution, states that there was no overlap. Allegedly, the Constitution of the Russian Federation was born purely sovereign - with the only remark that “Russian experts studied a complex of constitutional acts of other countries”. As examples, Pavel Krasheninnikov cites the basic laws of the United States, European countries, and even the constitution of India — states with a federal form of organization.

However, you can study many foreign examples, but here the main final option. And the option has a clear bias towards the constitutions of the so-called “progressive democracies”. On the one hand, this is wonderful, because democracy is like the rule of the people. But after the birth of the new Constitution, it literally immediately became clear that the Basic Law is in itself, and life in the country is in itself. One of the examples is Article 2 of the Constitution of the Russian Federation. So it sounds:

Against the background of a total crisis that paralyzed the state after the collapse of the USSR, the very concept of “human rights and freedoms” became an open mockery of tens of millions of Russians. When the majority of the citizens of the country were busy with the questions: “how to survive?”, “How to feed a family?”, Then rights and freedoms were somehow not remembered. Moreover, people did not want to think that the freedom to be an engineer, a scientist, a teacher who sells radio components on a flea market can be a “supreme value” and even be defended by the state.

Article 3, from point 2: “The people exercise their power directly, as well as through state authorities and local governments”, from point 3 of the same article: “The highest direct expression of the people’s power is referendum and free elections”.

If the highest direct expression of people's power is elections and a referendum, then it turns out that there is also some kind of “not higher” opportunity for the people to exercise power. Apparently, talking about meetings, rallies and the like, the holding of which is already described by separate laws. Yes, in 90, there were plenty of meetings and meetings, but it was just that the popular will didn’t work well with the realization of them. Why are there meetings, when both referendums and free elections eventually turned into a farce.

It is worth recalling that the falsification of the 1996 election results of the year was recognized not only as a losing candidate, but also by many Russian politicians who know what it is about. The people who then came to the polling stations to exercise "the highest direct expression of power through free elections" turned out to be deceived. In fact, we are talking about deception by those who at one time created the new Constitution. And it showed that the creators of the Basic Law themselves can easily turn into its main violators - there would be a personal interest.

Year 1996. Western "friends" actively promoted the idea of ​​signing the famous shameful Khasavyurt agreements, when the sovereignty of the Russian Federation openly ceased to spread to Chechnya. And about the observance of Russian law there is no speech immediately after the publication of the new Basic Law of the country. But these are the very "friends" who initially showed a big thumbs up, demonstrating the approval of the new Constitution of Russia. It turns out, openly contributed to the violation.

In general, our Constitution, which, they themselves say, is so trying to protect the ultra-liberals - the singers of the “great fathers of the Basic Law”, has in fact been subjected to abuse since the signing by the main democrat of that time in Russia - Boris Yeltsin. First of all, the abuse was committed by the persons themselves, who today are trying to allege contemporary anti-constitutional violations. If so, what did you start with? Is it not a violation? From them, from them.

This is alarming. People who in the 90-e were in the highest echelons of power, in fact, having made a state (unconstitutional) coup, are now rushing to power with all their forces, while appealing to the Constitution. Also funny, really. A sort of champions of constitutional principles, which ... walked the country once and now declare that they would strictly observe the Constitution strictly as opposed to "from these". This hypocrisy and the simultaneous thirst for revanchism - to return the country at a time when constitutional norms were interpreted as flexibly as the interpreters needed. 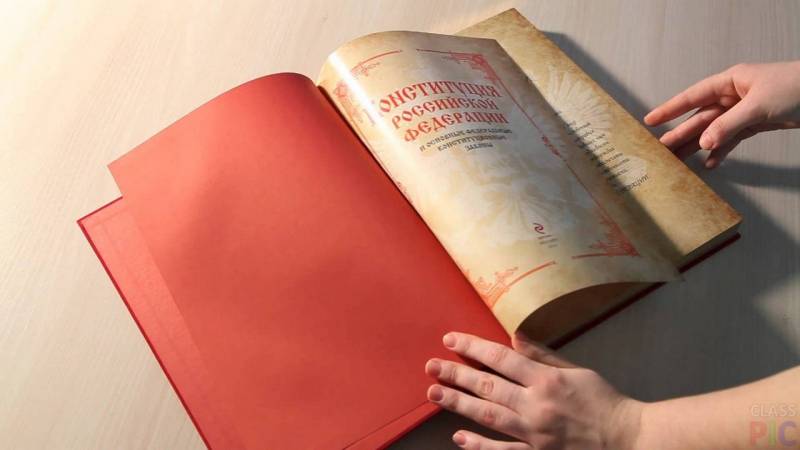 Today they are far from being unshakeable, but this is our main task - to make our own, feasible, contribution to the Basic Law as a result of really straightening into the Basic Law - for everyone and for everyone, and not remaining a book “137 interpretations. For the Constitution to become a set of rules for any citizen of the country, and not a flexible system for the circle of the "elect." Say: utopia is utopia? Who knows ... Sometimes utopias become reality. Shrug off, of course, much easier. But isn’t that why they brush us off so often?

Ctrl Enter
Noticed oshЫbku Highlight text and press. Ctrl + Enter
We are
Situational analysis of the death of the MH17 flight (Malaysian Boeing 777), made on the basis of engineering analysis from 15.08.2014Results of the week. "God forbid to see Russian revolt, senseless and merciless!"
Military Reviewin Yandex News
Military Reviewin Google News
53 comments
Information
Dear reader, to leave comments on the publication, you must to register.