December 17 2017
17
The most effective anti-tank guns of the final stage of the Second World War were distinguished by their large size and corresponding weight, which made it difficult to operate, in particular, to move around the battlefield. In 1943, the German command ordered the development of new tools, which should have been distinguished by lower weight and size while maintaining combat qualities. One of the solutions to this problem was the gun 7,5 cm PAK 50.


Perhaps the best German anti-tank gun of Hitler's Germany was a 75-mm towed gun 7,5 cm PAK 40. Its shells, depending on range, could hit everyone Tanks existing adversary. However, such weapon had certain cons. A gun longer than 5 and weighing about 1,5 was in need of a tractor, which sharply reduced its mobility on the battlefield. In addition, it differed relatively high cost. Thus, the army had every reason to demand a cheaper, compact and lightweight gun with high combat potential. 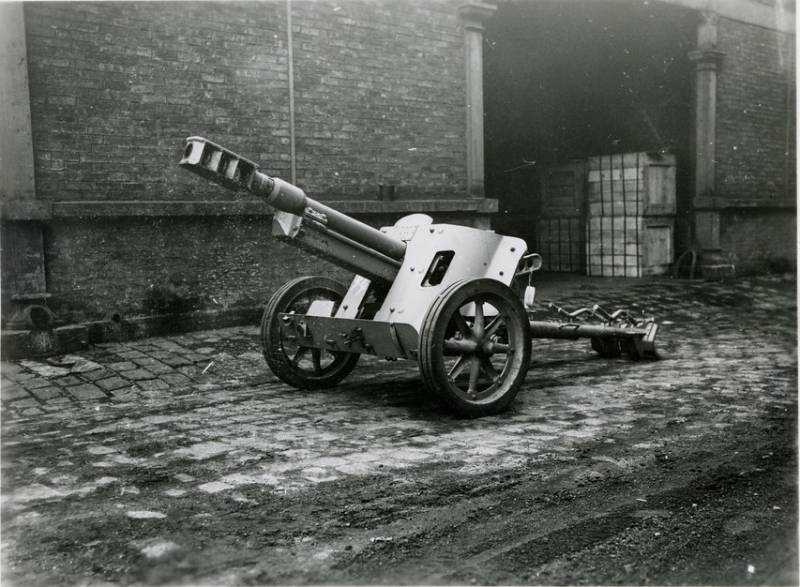 Work on the creation of new anti-tank guns, different acceptable fighting qualities and a reduced mass, began in the year 1943. The tasks were proposed to be solved in different ways. For example, the company Rheinmetall-Borsig proposed to build a new gun based on the principle of low pressure in the barrel. Such ideas were soon implemented in the project PAW 600, which came to mass production. A little later, an alternative anti-tank gun was proposed that did not use any unusual ideas.

The 7,5 cm PAK 50 project was based on a curious idea, based on existing developments and making the best use of existing opportunities. Ammunition of the PAK 40 serial gun included shots of various types, including the 7,5 cumulative projectile cm Panzergranate 38 HL / B or Pz.Gr. 38 HL / C. This product, weighing 4,57 kg, had an initial speed at the level of 450 m / s and in the entire range of ranges punched up to 100 mm of homogeneous armor at the meeting angle 30 °.

However, in a certain range of ranges, the Pz.Gr. 38 HL / C significantly lost in terms of armor penetration to other shells of a similar purpose, using the kinetic principle of destruction. Because of this, gunners mainly used armor-piercing shells of the types Pz.Gr 39 or Pz.Gr. 40. The cumulative projectile, in turn, could not fully demonstrate its potential. 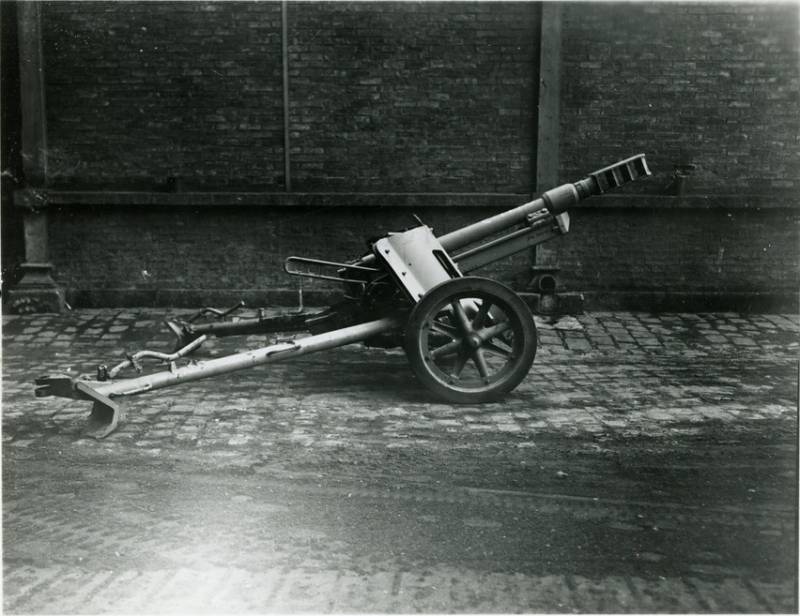 This ammunition was proposed to use in the new project of the gun. In contrast to the sabot shells, the cumulative did not impose special requirements on the length of the barrel and the pressure in its channel. This made it possible to shorten the trunk, as well as to use less thick walls. A gun with similar design features expectedly lost the ability to effectively use shots with a sabot projectile, but without them could show acceptable performance.

According to known data, the PAK 50 gun was proposed to be built on the basis of off-the-shelf components borrowed from those or other serial systems. In the future, this was supposed to simplify the serial production and operation of such systems. The wheeled carriage was borrowed from the anti-tank gun 5 cm PAK 38. In the 1943 year, this tool was removed from production due to obsolescence, and in the foreseeable future, a significant number of released carriages could be at the disposal of industry. The barrel and bolt for rework had to be borrowed from one of the serial guns.

To provide the desired characteristics, the authors of the project used a rifled barrel with a caliber 75 mm, whose length was reduced to 30 calibers (2250 mm). The shortened barrel was equipped with a developed three-chamber muzzle brake of an active-reactive type. The brake was distinguished by its large size and the presence of three large chambers at once. This design was associated with a reduced pressure in the barrel bore: the exhaust gases had less energy and a corresponding brake was required to transfer it to the gun. The breech of the gun was equipped with a horizontal wedge gate. Loading ammunition, as in the case of other German guns, carried out from the rear to the right. Apparently, the semi-automatic system was saved, independently discharging an empty sleeve.

The position of the gun

The barrel was mounted on movable supports connected to hydropneumatic recoil devices. The cylinders of the latter were located inside a light armored casing, placed under the barrel and serving as a guide. The swinging artillery unit was equipped with means of vertical guidance with manual drives. The latter allowed the barrel to be raised at angles from -8 ° to + 27 °. The horizontal guidance drive provided guidance within a sector of width 65 °.

The carriage had a fairly simple design. The supporting devices of the gun were fixed on the transverse tubular beam. It also installed unsprung wheels and tubular beds with openers. A characteristic feature of PAK 38 carriage was the extensive use of lightweight aluminum parts. Due to the expected growth of loads in the new project, they were replaced by steel ones. In terms of running and some performance characteristics, the new 7,5 cm PAK 50 cannon was no different from the serial 5 cm PAK 38.

Shield cover was also borrowed unchanged. A large width flap was fixed on the stationary part of the mast with a large notch in the upper part. Below it was joined by a swinging rectangular shield. It was proposed to install a large curved shield on the moving part of the mast, the sides of which were bent backwards. To improve the basic characteristics of the shield consisted of two parts, separated by some distance. 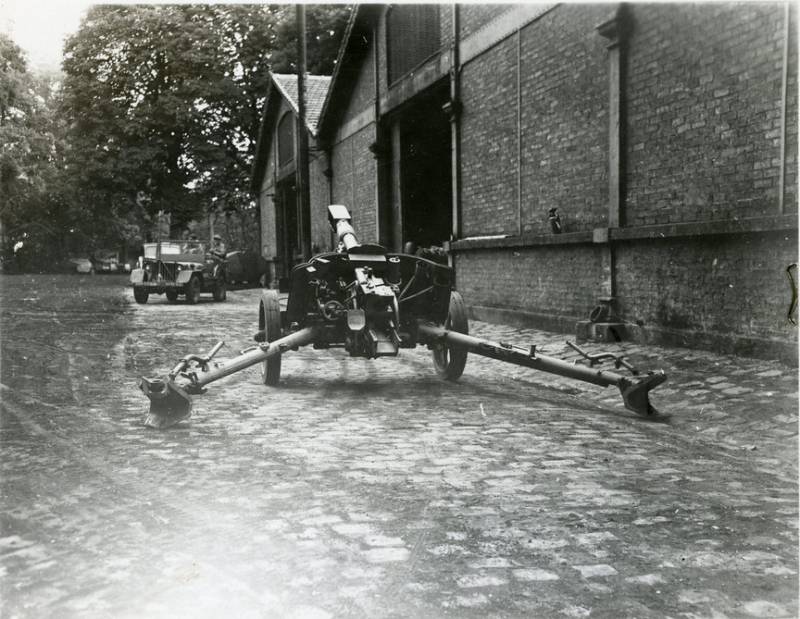 Rear view in the unfolded position

To the left of the breech of the gun was a sight, suitable for firing direct fire and from closed positions. The gunner was supposed to use a pair of flywheels to control the pickup mechanisms. To protect the gunner from a large breech to the right of his place there was a small shield, borrowed along with a gun carriage 50-mm gun.

The 7,5 cm PAK 50 cannon assembly was about one and a half times shorter than the PAK 50 serial cannon. In addition, there was a definite weight advantage - its total weight was only 1100 kg. This, to a certain extent, simplified operation: in particular, the calculation could independently roll the gun to a new position, without resorting to the help of a tractor.

Due to the smaller long barrel (30 calibers versus 46 in PAK 40), the new weapon has practically lost the ability to effectively use sabot and other armor-piercing shells of kinetic action. The reduction in the initial velocity of the projectile led to the fact that at a distance of 500 m the gun could penetrate only 75 mm of armor. At the same time, certain benefits were obtained from the use of cumulative Pz.Gr. 38 HL / C and their analogues. Their charge did not require a high initial velocity, and could also provide stable penetrability characteristics at all firing distances. 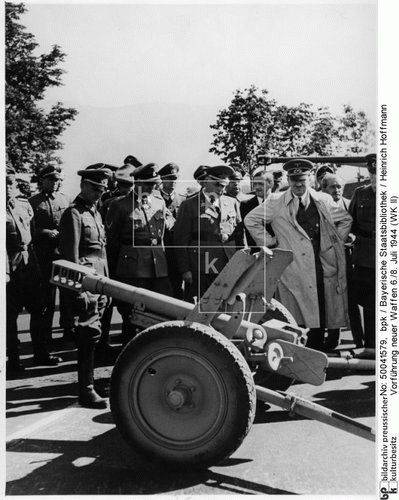 A promising 75-mm gun could send a cumulative projectile to a distance of 1000-1500 m. At the same time, regardless of the distance to the target, the projectile could penetrate to 100 mm of armor. According to some reports, the 7,5 cm PAK 50 can also use high-explosive fragmentation shells, previously created for the PAK 40 cannon. When using such ammunition, a certain increase in firing range was provided.

At the same time, a new type of gun had a number of minuses. First of all, the impossibility of using "kinetic" ammunition could be considered a problem, but the weapon was originally created for other projectiles. The high power of the propellant, previously created for other anti-tank guns, made the 7,5 cannon PAK 50 cannon shift noticeably when fired. The presence of a developed muzzle brake and recoil devices partially offset the movement of the gun. At the same time, the developed brake created a very large cloud of gases and raised dust, revealing the position of the artillerymen.

The use of a modified serial gun carriage and other units of the gun, as well as the use of existing ammunition, significantly reduced the cost of serial guns. Operation also had to be accompanied by certain savings.

In terms of basic operational and combat performance, the new 7,5 cm Panzerabwehrkanone 50 gun proved to be an interesting addition to the serial PAK 40. She allowed to get similar combat capabilities with greater ease of use and low cost production. By correctly determining the composition of the batteries, it was possible to increase the potential of anti-tank defense in a given area. 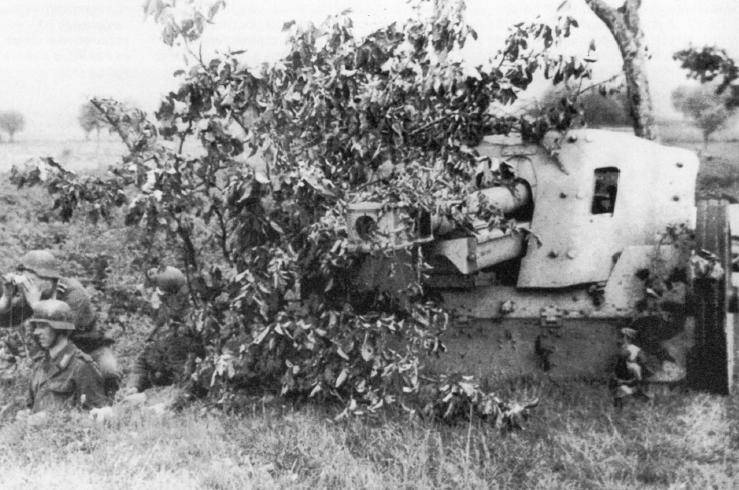 The gun on the position. Calculation performed disguise

By the middle of 1944, the project of anti-tank gun 7,5 cm PAK 50 was brought to the assembly stage of prototypes necessary for testing. Soon the new systems passed the tests and confirmed all the specified characteristics. In the proposed form, the gun was of particular interest to the army, which led to the appropriate decision. By the end of the summer 1944, the 7,5 cm PAK 50 gun was adopted. An order was also made for the serial production and supply of such guns.

According to reports, the serial production of guns 7,5 cm PAK 50 lasted for several months, until the spring of the year 1945. During this time, only a few hundred guns were manufactured, intended for deliveries to infantry and panzergrenadsky parts. It was assumed that the new weapons will complement existing systems and will provide certain advantages.

Precise information on the operation of 75-mm guns, optimized for the use of cumulative projectiles, is not available. There is information about the use of such weapons on the Eastern and Western fronts, but the details remain unknown. It can be assumed that such weapons allowed German troops to attack enemy tanks and even show certain results. However, specific accuracy indicators should have a negative impact on the results of the shooting. The large muzzle brake, which raised clouds of dust, in turn, was supposed to reduce the survivability of both the gun and its calculation. 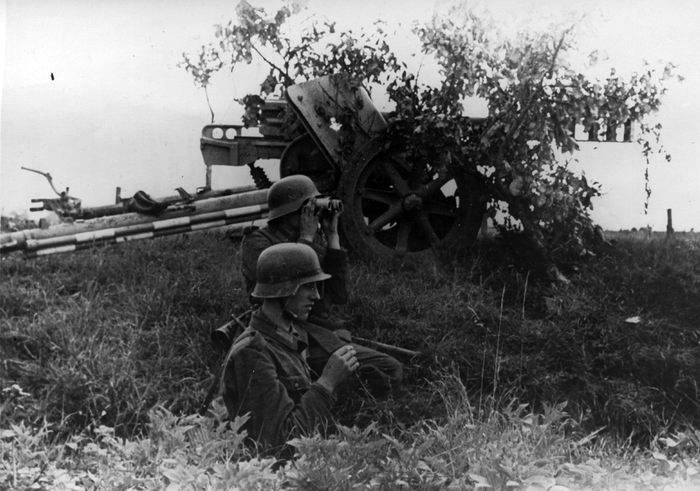 Gunners are looking for a goal

As can be judged by known data, anti-tank guns 7,5 cm PAK 50 with a projectile Pz.Gr. 38 HL / C did not have a noticeable effect on the course of the battles. Small tools could only complement existing systems, but they did not have to count on noticeable success. Thus, short-barreled guns did not leave a noticeable mark in stories.

During their short service life, the 7,5 cm PAK 50 guns had to suffer losses on a regular basis, due to which, by the end of the war, their number had noticeably decreased. Already in peacetime, all the remaining guns, apparently, as unnecessary went to the smelter. No such product has survived.

In 1943, a program was launched to develop promising anti-tank guns, which should have combat characteristics at the level of existing models, but at the same time differ from them in greater ease of use. The tasks could be solved in different ways. The 7,5 cm PAK 50 project provided for the fulfillment of requirements due to the correct selection of ammunition and the creation of a specialized weapon for it. From the point of view of technology, the goals were achieved, but it did not give the expected results. The project appeared too late, because of what the industry did not have time to deploy full-scale mass production and ensure the re-equipment of the troops.